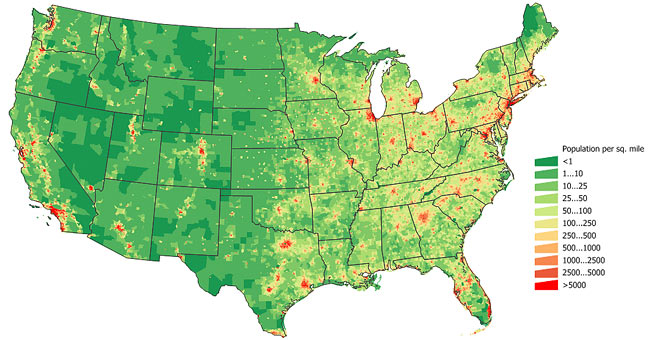 It is generally well known that population density is directly related, associated and proportional to political party affiliation.

When tightly packed humans live shoulder-to-shoulder in a geographically small area, their political outlook and ideals are often very different from other humans who live in places with more “breathing room” – places where they’re not constantly bumping into each other.

I came across a very interesting statistic and visualization which presents a stark, blunt, and outright undeniable reality that we are divided here in America not only by our political ideals, but by geographical regions. There literally are lines in the sand. When you cross from one side to the other, you are entering a different political world…

Visual data sourced from overflow.solutions, May-2017.

90% of the 100 most population-dense congressional districts
…are represented by a Democrat.

80% of the 100 least population-dense congressional districts
…are represented by a Republican.

Of the 435 congressional districts, if you split them in half by population density, the half with the lowest population-dense districts are represented by 80% Republicans.

The half with the highest population-dense districts are represented by 70% Democrats.

Can you see the divide?

Given the current and extreme political differences being exhibited today (leading up to, and ever since the Nov-2016 election), I found it interesting to visualize yet another additional “line in the sand” from a geographical perspective (population density).

This also does not seem very healthy to me from the perspective of consequential regulating influence of population-dense politics over that of the other.

Although local governments (town vs. city) may smooth out some of the regulatory differences from one set of needs to the other, from a bigger perspective State and Federal laws and regulations do indeed get forced upon the vast geographical regions from just a tiny pin of densely populated busy bodies…

I have written about this (population density vs. political ideals) several times before, however I still find it intriguing whenever I discover more supporting evidence of this stark reality.

One of the things that have always concerned me about this is how an extremely small geographical area of a State, a tiny percentage thereof, a pinpoint, can dictate their (mostly “left” or “progressive”) ideals (governing laws, regulations) to that of the vast geographical expanse of the State itself where lifestyle and values are often very different. While this does not occur in every state, it certainly has an effect for most…

How do you see this “divide” unfolding? Especially given the “in your face” mainstream push that we are seeing both in the media and overflowing into the streets of America?

Is this a new concern?
…or is this simply the way it has always been and always will be?

If it is a concern, is it an increasing one or even a dangerous thing?

For those of you who live or work in population-dense districts, do you see, experience, or have to deal with “the lines”?