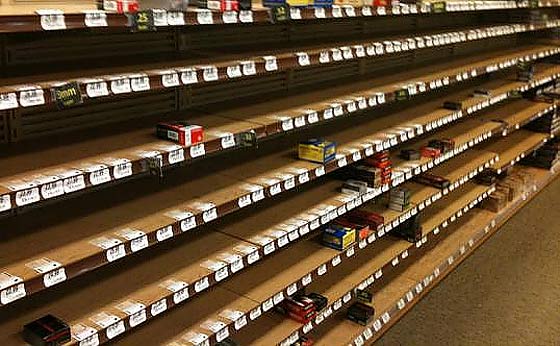 A comment awhile back on MSB read as follows:

I worked in sporting goods at WalMart when 911 happened. I stood and watched on the store TVs as the second plane flew into the towers. By noon I had sold all of the common caliber ammo I had. By the end of my shift we had completely sold out of all ammo, and the biggest part of the guns we had in the store. Some people were buying food but not many. A few were buying survival type items. But the guns and ammo were gone!

So here’s the thing… if and when the next ‘911’ (or bigger) terror attack hits within the U.S., instinctively patriots and others will arm themselves. The uncertainty of the situation will cause us to go into ‘protect’ mode and our personal security will become a high concern and priority – especially during the fluid time period of uncertainty.

With that said, here are a few thoughts and questions to consider:

Even those who are already ‘armed’ with seemingly sufficient ‘guns & ammo’, they too will feel compelled to ‘top off’. It’s instinctive (you can never have enough, right?)

Question: Will you ‘top off’ your ammo and/or firearms during the immediate aftermath timeline of uncertainty?

Question: Is it your opinion that others will?
Question: Will ammo shortages quickly develop?

When severe shortages (in general) develop, it can be a remarkably long time before supplies get back to normal. This has to do with a number of factors including our just-in-time (JIT) systems of forecast/manufacture/distribution for ‘normal’ demands.

It also has to do with the instinctive reaction of shoppers who may notice a small quantity of re-stock – and then they immediately buy it all up (because of the shortage). This puts even more demand on the re-supply system – making it even longer to ‘catch up’.

Remember the .22 ammo shortage of not too long ago?? This took a LONG TIME to settle out. (Does anyone still have a .22 shortage?)

Okay, lets get back to the hypothetical ‘major’ terrorism within the United States. Obviously the extent will have an effect on how patriots (and others) react.

I believe that it is plausible that we will face some sort of ‘911’ again – maybe even worse than that. Whether or not it is a ‘false flag’, when it happens we will probably be facing shortages in various categories due to a rush to the stores…

So, I suppose the underlying purpose of this post is to check one’s inventory 😉

What do you think about this?
For example, what calibers will be of concern for you?
Any other concerns/suggestions in the ‘guns & ammo’ category in this hypothetical regard?