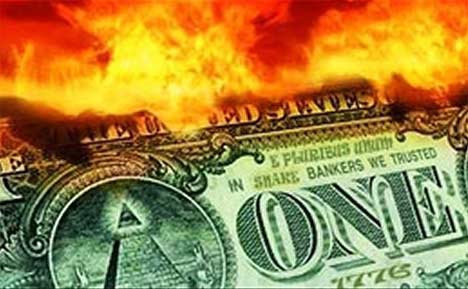 Here’s a thought… why not be your own central bank? What do I mean by that? Well, read on…

They (the FED, Federal Reserve, .gov, central banks from around the word) cannot, and will not stop spending more, and printing more (lots more) money (actually, i should say ‘currency’). The so called Central Banks are, and have been for a long time, propping up the system. Period. The moment it stops doing this, it all collapses.

The moment real austerity begins, the system fails. Interest rates must stay near zero, or, very low. On the other hand, the moment it creeps up, the cost of servicing the massive debt becomes untenable and it all crashes. At least that’s how I see it. The world debt today is somewhere around 226 Trillion dollars. Unfathomable.

The Ponzi Scheme Is Doomed To Failure

The Ponzi scheme. It’s doomed to failure. It always has been. The rhetoric, smoke-and-mirrors, and public deception will one day become seen for what it is. At some point, faith will be lost. They know it, the professionals know it, I know it… but do you know it? Well, you probably do know it too.

Every month your purchasing power with the dollar is diminished a little more. It’s just fact. Recently, the speed at which our currency is devaluing – is seemingly faster than ever. Inflation. Everyone has been affected by today’s inflation. Consequently, and for one reason, the middle class is being decimated. It’s getting worse. They know this, and are preparing for it.

The Global Fascist Corporatocracy and The Great Reset

Many of you know about the global fascist corporatocracy that has been tightening the noose around our necks. It’s happening all over the globe. There is a well known and documented plan for the so called great reset. It is well underway. You’re living in that transition, right now.

I do know that part of their plan is to implement a digital currency. As a result, you will not be able to buy or sell within the new system without it. The global corporatocracy will (by design) have complete control over you, what you do, what you say, where you go, websites you visit, what you watch, on and on and on…

How’s that? Because your social credit score will be tied with your digital wallet. And if you stray too far out of line, you will be penalized as such, or worse – shut out.

Anyway, it’s coming like a freight train. Count on it. They are not going to stop. So, with that said, instead of them being your central bank, why not you be your own central bank?

Be Your Own Central Bank

So, what about the phrase “be your own central bank”? And how does that tie in with this?

I heard the phrase years ago. Although I don’t recall if I first heard it from financial analyst Gregory Mannarino (who was a frequent guest on USAWatchdog, or, from Gerald Celente – either way, here’s my spin on it…

Currency is a store of value. For most, it’s a store of your labor. Your work. Production. The dollar is today’s currency. We work for it. We trade it for goods and services. Lots of it today is already digital. Visa and MasterCard being the biggest forms of today’s digital transactions. However, we can still trade in physical dollars. One day, we won’t be able to. At least that’s the plan.

Many (most?) will accept their slavery and social credit monitoring & enforcement. Others, I suspect, will not. I’m not sure how it will span out, but, there will likely become an underground of sorts. Subsequently, bartering and trading will be more of a thing.

Assets and Skills Towards Self Sufficiency

To be your own central bank. Acquire assets (and skills) of value. Tangible value. Survival value.

Becoming your own central bank begins with deciding for yourself what it is important and of value to you. It might not be today’s money itself… money / currency is simply the means of exchange to acquire our wants and needs. Instead, think about this…

Should the dollar collapse, or suddenly lose a third of its value, or be converted into a digital currency, would you keep the roof over your head? Would you be able to maintain the necessities of life? What are those things?

If you’ve got all that covered, then what are other avenues of asset investment over and above having what you need for food and shelter? Land? Precious metals? A paid-off home? A means of alternative energy? A sustainable garden and means of preserving your bounty?

Yes, all of that. In my view, anything that you can do, or purchase towards your own self-sufficiency, is and will be quite an asset.

Be your own central banker.