Preparedness for a tornado.

During many months of the year, a large portion of the United States is at risk for tornadoes – as evidenced in the map above which shows tornado tracks from 1950 through 2011.

Given the potentially massive destructive power of a tornado, the best preparedness is that of awareness (more about this later…).

As you all know, the destruction of a tornado is narrowly focused in a swath as it cuts across the earth for several minutes or even a half-hour or more… mostly in a fairly straight line with some zigs and zags.

However the width of the swath may vary from say a hundred feet, to as much as a mile wide! And a tornado can ‘grow’ very quickly…

The following incredible video footage taken by Reed Timmer (storm chaser) of a tornado near Wray, Colorado a few days ago is a sight to behold.

This one was ‘only’ an F2, so imagine how much worse and/or bigger it could be. When you observe the extreme wind circulation it should really hit home as to the dangers of a tornado…

The best (first) thing you can do is to simply be aware of your weather forecast. Many are so busy with their day-to-day lives that they don’t pay much attention to the weather – figuring that it will never happen to them (a tornado).

You may be interested to read this: 10 Signs That A Tornado May Be Imminent

If indoors during a tornado threat,

1. Get to an underground area, such as a basement or storm cellar.

2. If that’s not an option, go to a ‘small’ interior room or hallway on the lowest floor possible.

3. Stay away from doors, windows, and outside walls.

4. Stay in the center of the room, and avoid corners because they attract debris.

5. Avoid rooms with wide-span roofs, such as a ‘great room’ in your home, or auditoriums, cafeterias and gymnasiums.

If caught outdoors when a tornado is threatening,

1. Go for shelter in a basement or a sturdy building.

2. If that’s not an option within walking distance, get to your vehicle and drive to a safer place.

3. If flying debris is hitting the vehicle, pull over (seat belt on), keep your head below the windows and cover it with your hands or a blanket.

4. If there is an area which is noticeably lower than the roadway, lie in that area and cover your head with your hands.

Note: Do not get under an overpass or bridge. You are safer in a low, flat location.

Note: Flying debris from tornadoes causes most fatalities and injuries.

For real-time warning of a tornado, you must have a weather alert radio. You may be aware of an approaching storm during the daytime when you’re alert and can see what’s going on around you, etc.., BUT, if you’re in bed sleeping at night? How will you know??

I recently wrote about the following:
Best Weather Radio 2016

And then there’s a portable (for your car?)
Midland HH50B Portable Pocket Emergency Weather Alert Radio

Your Tornado Stories…?
For those who happen to read this, I’m curious to hear your stories or encounters (or close encounters) with a tornado… 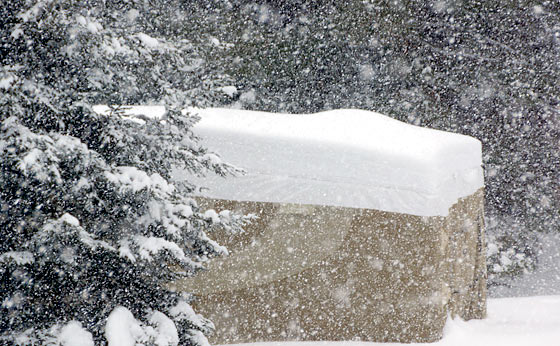 2015 has brought ‘tons’ of record snow onto the roofs of buildings all across New England. The weight load of the accumulated snow on a roof is astounding, and dangerous. Today I had the pleasure (sarcasm) of shoveling most of the snow off the roof of my 5th-wheel trailer. I should have shoveled it sooner,… 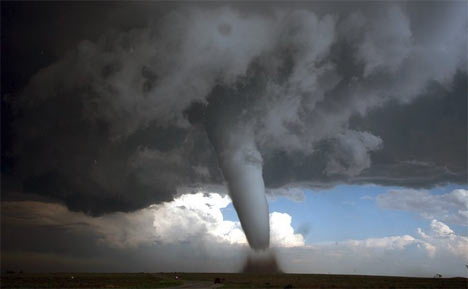