“Nobody really knows how to solve the problems at Fukushima. There is nobody that has solutions to these. The problems at Fukushima are unprecedented. So even bringing in outside expertise, all they can do is problem-solve — there’s no solutions that other countries have that they can come in and shut down the contamination and shutdown the leaks…”

…words from Robert Jacobs, a professor at Hiroshima University

“…but hopefully bringing in other expertise would bring in more professionalism that TEPCO has shown in the past 2-1/2 years…though even those experts will be at a loss as to how to solve the immense problems that we will be facing for decades in Fukushima.”

The situation at the failed nuclear power plant apparently remains pretty bleak, to say the least, and while Robert Jacobs statements may be true — the rest of the world needs to become more situationally aware (and involved) in doing the best we can for a lasting solution to the ongoing meltdown and release of radioactive contaminated cooling water into the environment of Japan — which is seeping to the rest of the world.

There is a worrying spike in radiation at Fukushima Daiichi compounding a worsening situation in recent months where readings from a water storage tank have rocketed six-and-a-half THOUSAND times (6,500) higher in two days after a powerful typhoon swept through Japan earlier this week causing more toxic water released into a drainage ditch leading to the Pacific Ocean.

And… the storage tank leaked over 300 TONS of contaminated water in August, some of which is believed to have found its way into the sea through a ditch, while TEPCO has said that radioactive substances like strontium have also reached the groundwater.

Plus… There’s a Super Typhoon (Francisco) bearing down on Japan which may impact even worse than what just happened with Typhoon Wipha. 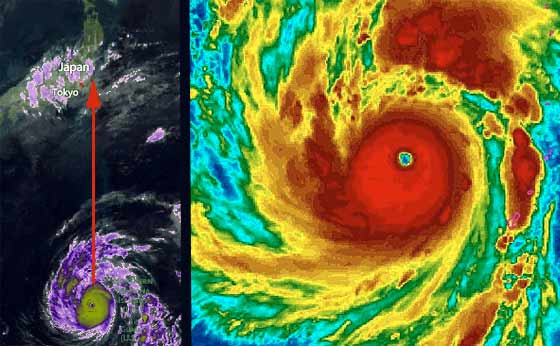 Francisco gained strength late Friday afternoon and was classified as a Super Typhoon by the Joint Typhoon Warning Center, which estimated one minute average sustained winds of 135 knots (155 mph) with gusts to 165 knots (190 mph). This would classify Franciso as a Category 4 hurricane on the Saffir-Simpson Scale.

Did you know that the nuclear rod “fuel pools” at Fukushima Daiichi are 100 feet above the ground, entirely open to the atmosphere (except for the emergency water constantly being pumped into them), and because the nuclear reactor buildings were blown apart by explosions back during 2011, these fuel pools (especially #4) could collapse from structural damage, should a strong earthquake occur (or Super Typhoon winds?), and scatter the rods all over the ground which could potentially explode into radioactive fire?…

Or you might want to know…
How to make your own earthen filter for radioactive water.