The Maya Grand Cycle And The Dark Rift 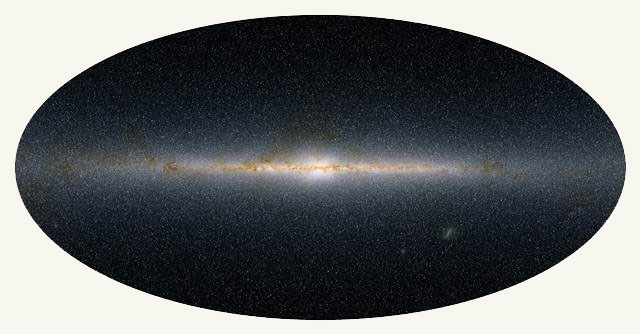 There is a lot of conjecture during this time (the end of 2012, the winter solstice, December 21), about the Mayan Long Count Calendar, the ‘Dark Rift’, and the Earth-Sun alignment relative to our Milky Way galaxy. While it (the aforementioned) may not be significant in a known Geo-physical or scientific way based on our existing laws of physics, it is nonetheless interesting to realize or observe the Mayan myth, and the wide range of beliefs and assumptions of so many people, both present and past regarding all this. The apparent facts may or may not be inconsequential, however, whenever it comes to consciousness of ‘space – time’ with relation to our universe of nearly inconceivable distances, forces and energies, for some it sometimes conjures up a mix of truths and thoughts of science fiction, myths, and imagination of what it is that we may not yet know…

The Maya of Central America were responsible for developing a calendar of great range and duration based upon a recurring time period of precisely 1,872,000 days, equal to 5,125.36 years. The name given to this particular calendar is the Long Count, and is sometimes referred to as a ‘Great Cycle’ of the Maya, or a ‘World Age’, or one growth cycle.

A ‘Grand Cycle’ of 25,630 years equals five Great Cycles or World Ages. This is also (coincidentally?) the exact amount of time it takes for the Earth to complete one ‘processional cycle’ (the gradual shift in the orientation of Earth’s axis of rotation, which, like a wobbling top, traces out a pair of cones joined at their apices in a cycle of approximately 26,000 years). It is amazing that the Maya knew this, thousands of years ago.

The Great Cycle began 25,630 years ago and is known as the age of the ‘Word People’ according to the Mayan Sacred Book, the ‘Popol Vuh’, text of the Maya. This period is called the ‘Pioneer Age’ by archeologists and is associated with the development of language.

The Second Great Cycle began 20,504 years ago, known as the age of the ‘Mud People’. Archaeologists classify this period as the ‘Sandia Age’, the peak of the last Ice Age.

The Third Great Cycle began 15,378 years ago, the age of the ‘Wood People’. This corresponds to the archaeological ‘Clovis Age’ with the appearance of the ‘atlatl’, long wooden spears with elaborately flaked flint tips characteristic of Clovis Man in the American Southwest.

The Fourth Great Cycle began 10,252 years ago, the age of the ‘Corn People’. Archaeologists classify this period as the ‘Archaic Age’ corresponding to the end of the last Ice Age and the beginning of agriculture.

The Fifth Great Cycle began 5,126 years ago on August 11, 3114 B.C. and ends December 21, 2012. This is the age of the ‘Movement People’ according to text of The Mayan Sacred Book, the Popol Vuh, and corresponds with the Modern Age.

The Winter Solstice of 2012 is the culmination of 25,630 years. And also, not accidentally or coincidentally, is one full Precession of the Equinox.

The Maya ‘Grand Cycle’ ends in December 2012 when the solstice sun (as seen from the Earth) will (apparently) ‘align’ with the Dark Rift. To modern astronomers, the Dark Rift is not significant.

What is the Dark Rift?

The Dark Rift (or Great Rift) appears to the eye as a dark streak that is positioned lengthwise through the bright band of the Milky Way Galaxy (the galaxy we’re ‘in’), over part of its extent, stretching from the constellation Cygnus to Sagittarius. The Dark Rift blocks out our view of the center bulge of the galaxy, about 28,000 light-years away, which itself contains a massive 4-Million solar mass black hole at its center. The Dark Rift is actually a mass of overlapping clouds made of interstellar dust and molecular gas located 300 light years from Earth. Modern Infrared and X-ray telescopes can see through it to the other side.

Note: The Milky Way, viewed far from city lights, is a glowing path which can be seen arching across the sky. This path is formed from the light of millions of stars, most of which we cannot see individually. The glowing light coincides with the mid plane of our galaxy, named the Milky Way.

During this December (and some previous – with a few more to follow…), during the northern hemisphere winter solstice when the Sun is appearing at its lowest altitude above the horizon – when the North Pole is tipped farthest from the sun at a tilt of 23.5 degrees, the Earth crosses the line of sight extending through the Sun to the Dark Rift. Again, the Mayan Grand Cycle ends on this day, December 21, 2012.

Note that this is not an alignment of the Earth-Sun with the center of the galaxy, galactic center, or even a ‘closest point’ of the Sun to the center, but is an alignment (of the Sun as seen from the Earth) along a portion of the Dark Rift, which itself coincides in the vicinity of the ‘nuclear bulge’ of the galactic center, which had mythical meanings to the Mayans. The Earth-Sun alignment of any point in the background repeats itself every ‘Grand Cycle’ of the Mayans (the time it takes the Earth and our Solar System to proceed all the way around the galaxy.

The Dark Rift has many Mayan mythic identities. It is the Black Road, the Road to the Underworld. A crevice in the branches of the Cosmic Tree (the Milky Way). The mouth of the Cosmic Monster (a jaguar or snake with tree-like features). The birth canal of the Cosmic Mother. 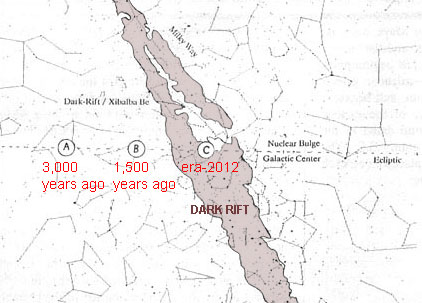 It marks the day of least daylight and the beginning of increasing daylight. The Maya of ancient times noticed that the sun during winter solstice was moving slowly towards the Milky Way and would eventually present a rare celestial juncture. The Maya calendar accurately tells us the time frame when this will occur, and to them it meant the beginning of a new Great Cycle of time.

A point of contention regarding exact dates is that although the Sun apparently will cross through the Dark Rift on December 21, 2012, it began crossing through the rift on the Winter Solstice date back in about the year 1800 AD. The Dark Rift does not have exact boundaries (as you can see by searching for images online) because it is made of irregular clouds of dust and gas. The Sun will continue to be viewed against the backdrop of this rift during the Winter Solstice until it approximately ends during the year 2100.

The fact does remain however that the Maya Grand Cycle does end on December 21, 2012, a time approximately during the ‘window’ of travel through the Dark Rift alignment, and is symbolic in myth and legend. According to modern day astronomers, it means nothing and is insignificant. To others it is a time of spiritual reflection and wonder. To still others it is a time of apocalypse and doom. Regardless of what side you stand, it is impressive and remarkable how the ancient Mayans were able to build this celestial clock… which is still ticking…

The Mayans amassed a huge amount of knowledge from generation to generation of galactic observations. For sure they knew their stuff…our question is “what stuff did they know?” As modern man attempts to make a name by figuring out exactly what it was they were trying to tell us is reminiscent of a financial annalist attempting to out guess the markets from day to day. In the “Mayan Market” however, you may not be around to find out if you were right or wrong. If you happened to be right and nothing happens…in light of the immense Mayan knowledge on the subject, I would consider any modern man prediction purely a Lucky Guess. Since no one today knows exactly what the Mayans meant in their writings, I guess we’ll all have to find out in 2 months time from TODAY!

The comment by ‘chiller’ shows the importance of keeping knowledge secure at all costs, we may never know what the ancient generations before us knew because their security methods failed the test of time. Storage and searchability of vast amounts of knowledge is key. 2012-on ‘Google People’?

Only discovered a couple of years ago. Many unanswered questions regarding this site and civilization. Not the least being that some very large structures appear to Laser cut.