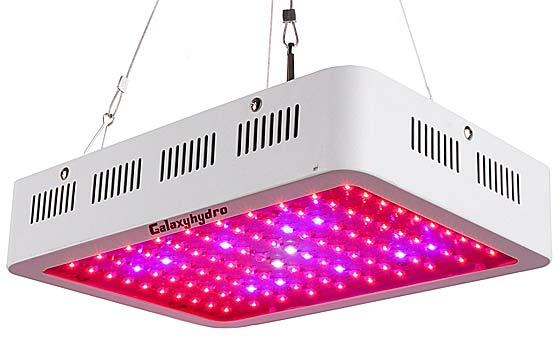 LED grow lights are made up of light-emitting diodes, and are advantageous over other methods of plant lights because they consume much less electricity and the typical LED has a life span of 50,000 hours (if on a 12 hour timer, 11 years).

If you use an alternative energy source in your home (e.g. solar or wind power) electric power consumption is always a concern. If you’re supplementing indoor plant growth (especially during the winter) an LED grow light might be helpful.

Not all LED grow lights are the same however:

While the LED technology and its implementation to “grow lights” is still relatively new, there has been some research to indicate that not all LED grow lights are the same with regards to successful growing of indoor plants.

LED grow light models can now be customized for specific wavelengths of light.

Instead of just one wavelength (color), studies have revealed that combinations of green, red, far-red and blue light shave beneficial effects on plant growth.

While it is possible to grow plants under only red LED light, the plants will generally display unhealthy growth.

Studies have shown that many plants will grow normally under a combination of both red and blue light.

Further studies have shown plants will grow even better under a combination of red, blue and green wavelengths.

In tests conducted by Philips Lighting on LED grow lights to find an optimal light recipe for growing various vegetables in greenhouses, they found that the following aspects of light affects both plant growth and plant development:

-light intensity
-total light over time
-light at which moment of the day
-light/dark period per day
-light quality (spectrum)
-light direction and light distribution over the plants.

However it’s noted that in tests between tomatoes, mini cucumbers and bell peppers, the optimal light recipe was not the same for all plants, and varied depending on both the crop and the region, so optimizing LED lighting in greenhouses is based on some trial and error.

The diodes used in initial LED grow light designs were usually 1/3 watt to 1 watt in power. However, higher wattage diodes such as 3 watt and 5 watt diodes are now commonly used in LED grow lights.

LED grow lights should be kept at least 12 inches away from plants to prevent leaf burn.

There are LOTS of LED grow lights on the market today in a wide variety of sizes, shapes, even strip lights. Some are designed to be very powerful while others will light up a small desk plant. If you’re interested, you can search for them here…

Do any of you use plant grow lights?
What has been your experience?