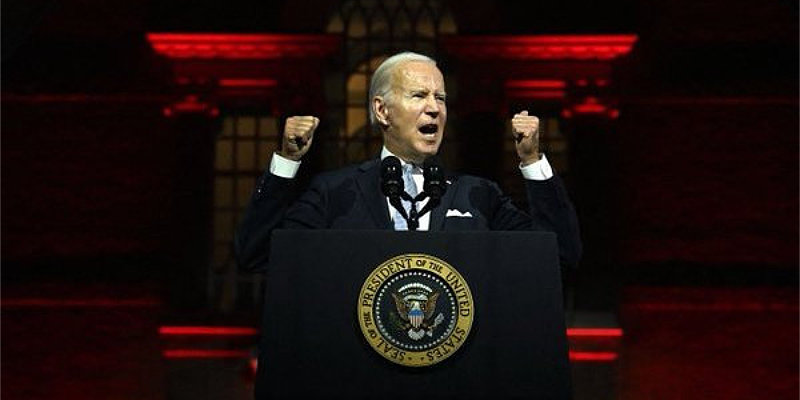 Biden/Trump have now mutually declared each other enemies of the state, within just the last days.

The stage is now set, and an extraordinarily dangerous show is about to begin. The USA likes to do things bigger and better, and this will be no exception. Once this kicks off there will be no stopping it, and I expect escalation of crises and conflicts worldwide.

Keep your wits about you and continue moving away from the system, towards self-sufficiency in food, energy, medicine, local markets/currencies. Radical and rapid decentralization is the only way forward.

Comms will go down at some point. I am grateful and honored to have shared this space with you.

Ladies and Gentlemen… I am HIGHLY CONCERNED of the ramifications rapidly coming our way. I mean, we are witnessing absolutely unprecedented times whereby a sitting president has declared war on half (or more) of American citizens. “A clear and present danger”. “A threat to democracy”. And, a few days ago, his political opposition just declared him an “enemy of the state”…

“As I stand here tonight, equality and democracy are under assault. We do ourselves no favor to pretend otherwise,” “There’s no question that the Republican Party today is dominated, driven and intimidated by Donald Trump and the MAGA Republicans. And that is a threat to this country.”

He further tweeted that Trump and “MAGA Republicans” are “a threat to the very soul of this country.” Fanning the flames he recently said (projected), the GOP are “full of anger, violence, hate, division.”

The third world totalitarian tactics being used by Biden’s handlers to destroy the opposition party and its leader is being cheered on by the left and their media mouthpieces. Biden’s diabolically dark, hateful speech, with satanic blood red background, on the sacred ground where our Founding Fathers declared our independence from a tyrannical despot, appears to be the spark which will ignite real violence…

~ “SAY NOTHING” PHASE OF THIS FOURTH TURNING (theburningplatform)

The regime has openly declared war on their political opponents.

Most of us here know the powerful global hands who installed this regime, and where they want to take their political opposition. Essentially, they want to eliminate them – if they can.

The rise in popularity for freedom, liberty, independence and independent thought, affordable energy, opportunity, an enduring ‘moral order’, … it all stands in the way.

Instead, they’re tearing it all down. They intend to replace it with a “totalitarian techno-gulag. You will be electronically monitored, disarmed, own nothing, be judged by social credit score, live in fear, and be happy.”. All with the help of an installed president and a politically weaponized DOJ, CIA, FBI, Congress, Judiciary, legacy media, and social media.

And now, a few days ago, Trump said that Biden is an “enemy of the state”.

Prepare For Dangerous Times Leading Up To November

While many may agree with Trump’s statement, the point I’m trying to make here (and the reason for posting this politically-charged article) is this… I am HIGHLY CONCERNED about the next 60 days. I suggest that you step up your readiness.

The regime can feel November coming. In fact they’re terrified of it. If they fall out of power, it may be over for them – maybe for a long time. And they know it. The vast majority of people are not happy. The November wave may likely be tall enough to overcome the sea-walls of built-in-fraud. It will have to be. And they know it. Given their desperation, and all that they have tried (and failed) so far, I am highly concerned with just 62 days left (as of this post).

Don’t Be Stupid – And Watch & Prepare For False Flag

Here’s the thing… I truly hope that no one does anything stupid. I don’t care which side of the deep divide you’re on. Don’t let the global cabal get what they want. And they want kinetic action between the people. They want it bad. Now is not the time (and hopefully it won’t be necessary for survival – later). Don’t give them the excuse to stop the election, or to alter its outcome because the public tide has been turned as a result of something horrifically stupid – or – a false flag.

I am mostly concerned about the latter. Why? Because at this point, both sides have already declared war. And the pretext for most wars throughout history have been a False Flag event. Why? Because they need a “bad guy” (or what appears to be a “bad guy”) to go first – justifying the reaction (and public support opinion).

It’s my opinion there will be something very bad coming (or somethings). There has to be. I feel this way because the most powerful entities in the world and their installed puppet regime here in America have not come this far, and done what they’ve already done towards their great reset goals, to just sit back and simply rely upon the built-in-voter-fraud to overcome November. The wave may be (and likely will be) too high for that. I am highly concerned about the extent at which they will need to have – for adequate effect.

I believe that right now, we’re likely living through one of the most dangerous times in American history.

Can you feel it?