The infrastructure of our nations oldest cities is crumbling, as exemplified in a recent study by researchers from Boston University and Duke University whose findings reveal the potential for terrifying natural gas explosions in and around the city of Boston.

While the study was not focused on explosion risk, their measurements around the city discovered half a dozen locations where the level of gas exceeded the threshold at which a spark could set off a fireball.

It stands to reason that cities such as Boston, New York and others which have aging infrastructures, may become increasingly vulnerable as metal pipelines rust, joints weaken, and nature takes its course.

Cast iron was the material of choice for low pressure distribution mains in the U.S. until the 1950s. Pipelines typically consist of 12-foot sections connected by bell and spigot joints, that are sealed by jute packing plus cement or molten lead. Leaks tend to develop in the packing over time due to heavy overhead traffic, freeze-thaw cycles, and naturally shifting soil.

The overall results of the recent research study concluded in NOV-2012 and conducted by researchers at BU and Duke indicate that the vast majority of leaks discovered around Boston are small, and pose no risk of explosion. However the fact that at least 6 underground locations do indeed present the risk of explosion, should be a call to action as well as further evidence of the systemic risks associated with living in a city region – dependent upon old systems of infrastructure.

When was the first use of natural gas in Boston? It may have been during 1834, when the city installed its first gas street light in the Faneuil Hall area. 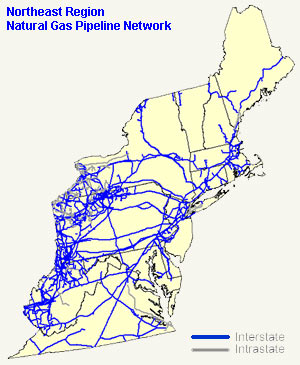 The researchers report finding 3,356 separate natural gas leaks under the streets of Boston. “…we came across six locations in Boston where gas concentrations exceeded the threshold above which explosions can occur,”

In addition to the explosion hazard, natural gas also poses a major environmental threat: Methane, the primary ingredient of natural gas, is a powerful greenhouse gas that degrades air quality. Leaks in the United States contribute to $3 billion of lost and unaccounted for natural gas each year.

The leaks were distributed evenly across neighborhoods and were associated with old cast-iron underground pipes. Levels of methane in the surface air on Boston’s streets exceeded fifteen times the normal atmospheric background value.

Like Boston, other cities with aging pipeline infrastructure may be prone to leaks.

(and yet another reason to move out of the city…)