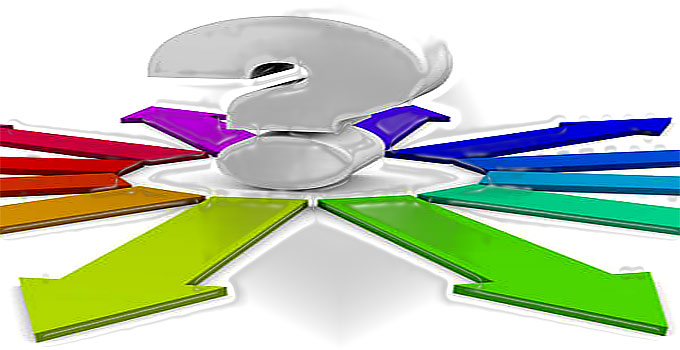 Many of the ModernSurvivalBlog articles and comments focus on general preparedness:

— Basic priorities such as water, food, shelter, clothing, communications, tools,  etc.  a topic at a time.

— Drilling down deeply to help readers plan and prepare for pretty much any situation with respect to that topic.

Also MSB readers are familiar with “levels” of preparedness – which allow them to target and measure their progress.  All highly useful.

That said, becoming more prepared would be much easier if you knew exactly what to plan for, right?

Knowing the contingency you are confronted with allows you to focus!

Separate the wheat from the chaff – so you can spend your prepping efforts and dollars to maximum effect!

For example, what if your worst case scenario is an influenza pandemic (or ebola, anthrax, smallpox…. whatever)?

You would stockpile medical and food supplies. This would allow you and your family to isolate yourselves from the rest of society so you can operate independently without becoming contaminated for a limited time – say, up to a year –  ultimately to survive the situation.

However, these preps might be of less use if the actual scenario is, say, foreign invasion of a much longer duration where kinetic supplies might be more relevant.  Or an EMP/CME event where the grid and communications systems go down.

For those who are not on unlimited budgets (a lot of us!) the “opportunity cost “ of a ‘focus on one scenario’ means you will pay less attention to other potential scenarios. Some of them pretty ‘massive’.

These scenarios might include events like nuclear war or economic collapse (or others). There is a whole raft of equipment, supplies and training needed for those!

The various massive preparedness scenarios have been discussed exhaustively.
Some of the most often mentioned includes:

Events on a regional level like tornadoes, hurricanes, blizzards, short-term power outages, riots in the big city, etc. are also scenarios worth preparing for. But these are likely to be shorter in duration than the truly massive scenarios.

Approach One at a time

One approach to managing the various preparedness scenarios is to first focus on one.  Then once a minimum level of preparedness has been achieved,  move to the next one.

But which one should you pick first?  And second?  And so forth…

None of us has the ability to predict the future with any precision. But we do all have the ability to think through what our options and priorities are….with help from our fellow MBB contributors!

Of the ‘massive’ (worst case) scenarios listed, which 5 would you most likely prepare for?

The results are in: 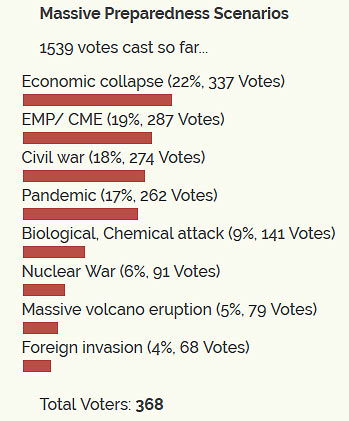 HOW WOULD YOU RANK ORDER THE LIKELIHOOD OF THE BIG SCENARIOS?

WHICH SCENARIO DO YOU THINK IS THE MOST LIKELY? SHARE YOUR REASONS!