When The Dollar Is No Longer A Reserve Currency 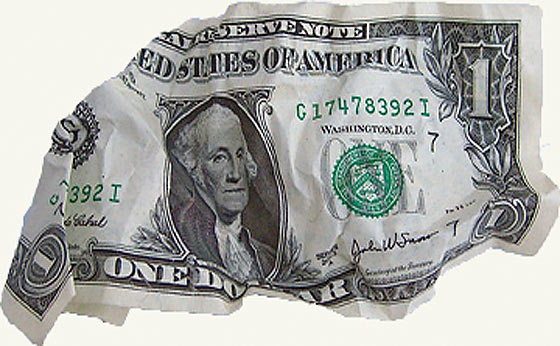 I believe the U.S. is in the midst of a major currency collapse, and a huge change in our normal way of life.

The following is a list of startling notes that I wrote, as well as statements credited to Stansberry Research while I watched a video related to their newsletter back in 2011.

The scary thing is… nothing has changed since I wrote this, and it has actually gotten much worse!

“There are a number of financial counselors predicting the demise of the dollar as the world’s basis of currency exchange. It seems that a number of people are aware that China, Japan, Russia, France are making definite moves in that direction. Brazil and Argentina as well a Cuba are all in the same camp. When will Washington and Wall Street wake up?”

He is absolutely correct. It is well known to those who follow what is happening, that the dollar is on the way out of world reserve status. To answer his question… Washington and Wall Street will not wake up. They will ride this horse until it drops dead…

The government has been borrowing so much money, that soon, we will not be able to afford even the interest on the loans.

Even if you doubled tax revenue, we would still be running a deficit!

Even if all U.S. citizens were taxed 100% of their income, it would still not be enough to balance the Federal budget! Tax increases will not even make the smallest dent on the true size of our debt.

There is not a single credible plan, by any political party, to merely end our annual deficits, never mind actually paying back our debts.

Here’s the kicker… the costs of maintaining our debts are about to skyrocket.

How much interest? Right now we’re paying about 15% of federal tax receipts (about $200 billion a year). If the government had to spend a ‘real’ market-based rate of interest, say 6%, it would cost $840 billion a year on interest (76% of tax receipts), just for what we owe right now, today.

We are trapped. The main-stream-media does not want you to know how precarious our government’s finances really are.

A debt default would be inevitable if not for one anomaly, the thing that has saved the U.S. so far, that is, the country’s ability to simply print more money. The U.S. is the only debtor in the world who can legally print U.S. dollars, and the dollar is the world’s reserve currency.

So, that sounds pretty good, just print more money, what is there to worry about?

The U.S. is the only country in the world that doesn’t have to pay for its imports or its debts in a foreign currency.
Example: A German wants to buy oil from Saudi Arabia – the German cannot pay for the oil in German marks (or Euro’s) because the oil is priced in dollars. You have to buy dollars first, then buy your oil.

The U.S. has been able to consume as much as we want without worrying about acquiring the money to pay for it, because U.S. dollars are accepted everywhere around the world.

As our creditors continue to figure out what’s happening (printing more and more dollars), we’re going to have very BIG problems. The creditors will either begin to refuse payment in dollars, or they will greatly discount the value of these new dollars. It’s already happening.

Most Americans have no clue what the repercussions are of losing the status of world currency.

Yes it can happen here. In fact, the exchange value of the U.S. dollar has fallen about 13% since June 2010. Its rate of decline is accelerating.

As the U.S. dollar continues to lose it’s position as the world’s currency, gas, oil, and other commodities will continue to skyrocket. Almost everything we consume will immediately get more expensive. It’s happening right now. Everything is getting more expensive.

The government says that there is no inflation. How is that even possible? They actually believe that the American public is going to believe them?

It’s only going to get worse, because we can NOT stop printing because we can’t actually afford our existing debts. No one wants you to know this. No one. That’s why, despite the obvious inflation going on all around the world, the Fed continues to say there’s no inflation at all. The government is radically devaluing the dollar and totally lying to everyone about what is really happening.

The Chinese are getting out of the dollar as fast as they can via strategic commodities.

With less demand for the dollar around the globe, interest rates will skyrocket.

Stock prices will likely plummet by at least 40% in a matter of weeks as a result of this event in the currency markets.

When the U.S. dollar loses its spot as the world’s reserve currency, the brutal downturn will be about 10-times worse than the mortgage crisis of 2008.

When everyone is trying to get rid of their dollars, the government is printing more and more to pay debts, the crisis will reach epic proportions.

In the past 100 years this type of debt crisis has reared its ugly head in Germany, Russia, Austria, Poland, Argentina, Brazil, Chile, the Ukraine, Japan, and China.

Here’s the thing that most people don’t realize… The U.S. government can only continue printing dollars as long as the dollar remains the world’s reserve currency.

Reported by Robert Fisk (veteran Middle East reporter), last fall, China, Japan, Russia, and France got together for a secret meeting… without the U.S. being present or even knowing about the meeting. It was reported that Gulf Arabs are plotting to end dollar dealings for oil, moving instead to a basket of currencies including the Japanese Yen, Chinese yuan, the euro, gold, and a new unified currency planned for nations in the Gulf including Saudi Arabia, Abu Dhabi, Kuwait, and Qatar.

In February (2011), the IMF has proposed replacing the U.S. dollar with something called ‘Special Drawing Rights’, or SDRs. SDRs will be able to be converted into any currency, based on a weighted basket of international currencies.

The IMF also proposed creating SDR-denominated bonds, which could reduce central banks’ dependence on U.S. Treasuries. They also suggested that certain assets, such as oil and gold, which are traded in U.S. dollars, could be priced using SDRs. (This is a HUGE step to replace the U.S. dollar as the world’s reserve currency)

Russian and China have made an agreement to settle all debts between them in each others currencies without first transferring to dollars.

The U.S. dollar has remained the world’s reserve currency for more than 50 years. It seems as though its days are numbered. Don’t remain in denial.

Start to consider what will happen around you when this currency crisis unfolds.

Plan to have six months of food, medical supplies, and access to water.

Have a place you can go to if you need to get out due to rioting or unrest.

Do not count on the government to save you if all he$$ breaks loose. The government will be too concerned about saving itself.

Examine where your current assets or investments are.

Learn how to garden some of your own food.

Examine your security and add where it needs adding.

The more self sufficient that you can become, the better you will get through the crisis.