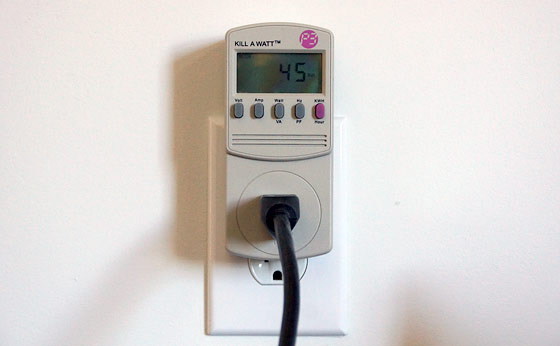 The ‘Kill A Watt’ meter measures kilowatts and kilowatt hours. Better said, it measures the power consumption over time of whatever appliance is plugged into it. I have two of these.

The Kill A Watt (a pun on kilowatt) is an electricity usage monitor manufactured by Prodigit Electronics and sold by P3 International. It measures the energy used by devices plugged directly into the meter.

Using a Kill A Watt Meter:

There are several practical uses for the Kill A Watt meter.

One is to better understand the electricity being used in your home from various appliances and devices. To measure appliance power consumption. It may surprise you. The meter is designed to help you assess the power consumption and efficiency of your appliances. Perhaps cutting down on costs by monitoring and knowing where the power hogs are…

Another use is to help during the design of an alternative energy system such as a solar power system. It’s especially useful to know the power consumption of things in your home if you’re adding a battery bank to your solar power system (for example).

It is necessary to know or measure the power consumption of your devices and appliances before an alternative energy system is put in place. You need to understand the energy requirements.

Are you considering or planning an off-grid or standalone alternative energy system such as a solar PV system?

Maybe for your home, your cabin or wherever else? Maybe just a source of backup power for a few things?

One of the first things you need to do is to check the energy usage or power consumption of the appliances and devices that you intend to use.

I have been using a few of these convenient power meters for this purpose.

A few years ago it really helped me during the design stage of my current PV solar array size, battery bank, charger/inverter, etc..

Here’s how it works and how simple it is to use:

UPDATE: Their are now Kill A Watt alternatives. The P4460 is an enhanced version. It includes a backup battery to store measurements even when disconnected from electricity. It can be programmed with electricity cost information, which enables it to display the cost of the electricity consumed since reset. From this, it can calculate cost per hour, day, week, month, or year.

I have a background in electronics, electricity, and generally electro-mechanical. But you don’t need to be an expert to grasp some of the basic concepts of a solar PV system. Though you do need some fundamental knowledge of electricity – such as ‘ohms-law’ and a few other fundamentals).

My assumption for this article will be that you have some basic knowledge. Even if you don’t posses some of the fundamental knowledge in this area, hopefully you will still find the articles to be somewhat interesting (grin).

How Much Energy Do Your Appliances Use

The goal here is to supply enough alternative energy to power some devices. Maybe lights, a refrigerator, chest freezer, furnace, or any other electrically powered appliance or device.

Each and every appliance or device requires (draws / consumes) it’s own unique amount of power to function.

Power is the rate of doing ‘work’. Some devices draw a constant and same amount of power. Other devices or appliances will vary their consumption over time. For example a refrigerator will cycle its compressor pump on and off throughout the day.

In the United States, when you ‘plug a device into a wall outlet, it’s ‘fed’ 120 volts of electricity.

As the appliance or device draws power from that 120 volt line, it draws ‘current’ (measured in ‘Amps’). You might picture ‘current’ as the water flowing through a garden hose. The water pressure of that hose is analogous to ‘volts’.

Calculate the power that the appliance uses by simply multiplying ‘Volts’ times ‘Amps’. Power is measured in ‘Watts‘.

Okay, let’s make it even easier to figure out how much power your appliances draw.

This meter will display the following:

And even more useful, kilowatt hours!

Knowing the kilowatt hour consumption of an appliance (over time) is an accurate way to know the ‘real’ power consumption (as opposed to instantaneous consumption which may vary).

And the only real way to know how much power the device uses is to measure it over time. To get a longer term ‘average’.

This is very important for some aspects of design.

Power Consumption of my Refrigerator

For example, Lets say that I want to discover the real power consumption of my refrigerator.

I know that if I plugged the refrigerator into the KILL A WATT meter and measured the instantaneous power consumption – I knew that it would not be accurate.

Why? Because I know that a refrigerator compressor will cycle on and off throughout the day.

So the only accurate way to measure it is to leave it plugged in to the Kill-A-Watt meter for say, 24 hours. The meter will then ‘accumulate’ the watt hours used and will display the running total!

In my particular case, I left the fridge plugged into the meter for 24 hours.

Tip: The ‘turn on’ spike current of some devices is another important parameter for design consideration (the inverter). But that’s beyond the scope of this article.

How Much Energy Does my Chest Freezer Use

I did the same for my chest freezer. Measured it with my Kill-A-Watt meter.

The freezer was already at temperature and filled. After 24 hours it had consumed (only) 0.264 kWh (or 264 watt hours) which comes out to be just 11 watts per hour on average! Less than I thought it would be… (though it’s a good chest freezer).

You get the idea – you simply plug in various devices and measure them over time to get an accurate averaged measurement. This can then be used in one’s calculations of ‘real’ power requirements for the devices for your alternative energy system.

This would help calculate whether or not my existing battery bank (with associated inverter/charger) could supply enough energy (kWh) to keep it running all night long if needed. Here’s how I did it:

I constructed a set of ‘pig tails’ from having cut a short heavy duty (#12) extension cord in half (don’t try this at home unless you are qualified!). Then I connected this into my circuit-breaker panel to temporarily re-route my furnace ‘hot’ and ‘neutral’ line through the KILL A WATT meter.

I let it run this way for several days to get a good average. It turned out that under the worst of conditions (it was about 20 below zero each of those nights!) the furnace was drawing on average, 58 watts. Not bad! Certainly no problem for my battery bank…

I thought I would share with you the methodology I’ve used for calculating power consumption here at home.

I used the data to build a spreadsheet. It helped while deciding upon efficiencies, system integration, etc.

While my electric utility bill provides an overall energy consumption for a given month (total kWh), it helps immensely to understand the individual energy demands of each device and appliance. I literally measured everything that uses electricity in the house!

The solar PV system that I designed does not replace my existing 200 Amp electrical service. But instead it’s integrated as an off-grid standalone source of energy which I selectively switch in (or out) by way of transfer switches.