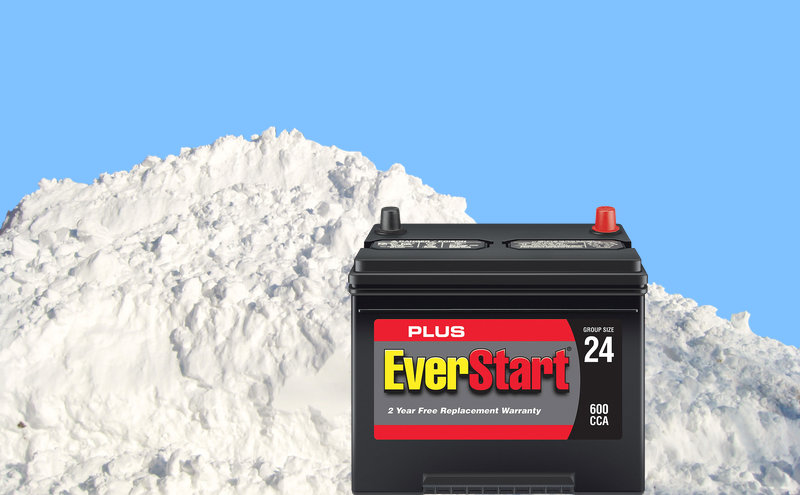 What happens when your lead acid battery physically freezes? Likely, it will become irreparably ruined to a sufficient extent. The ice that forms will expand and press on the internal cells and plates (and bulging the wall/case of the battery itself). The case may even crack – resulting in leaks. Given internal physical tolerances, some (or all) of it may ‘short out’ inside. The battery may never hold a proper charge (or any charge) again.

The problem arises when your battery is only partially charged. This is when you might run into trouble during the cold winter months.

A little more detail… The exact numbers vary a bit, depending on a few factors. A fully charged (lead acid) battery will freeze. But not until temperatures drop to -94°F (-70 °C)! That’s pretty much not going to happen anywhere here on earth, right?!

Can a flooded battery freeze?

Important >> The less charge on the lead acid battery, the more susceptible it is to freezing.

I built a chart that cross references battery state-of-charge with the approximate temperature at which the battery will freeze. This is for lead acid type batteries. Car batteries, for example. Or those which typically install in lawn tractors, ATV’s, snowmobiles, maybe in your camper, etc..

The following article provides a better understanding of battery state of charge (approx.. corresponding open-circuit voltage). There are caveats to these measurements – which are clearly explained in the article:

As you can see, if your battery is only half charged (50% SOC), it could freeze solid at -4°F. This scenario is entirely plausible if you’re not careful. I often see temperatures below zero during the coldest winter months. The coldest I’ve experienced here was -32°F. It is not uncommon to experience early morning temperatures around 20 below at times throughout the winter here. So I need to be attentive.

I lost two 12-volt batteries several years ago in my 5th-wheel camper. Although they had been charged, I forgot to physically disconnect the batteries for the winter. As it turned out, there was a small parasitic drain constantly drawing down the batteries (propane gas detectors and a few other things). The batteries eventually went dead. And then they froze. It was an expensive mistake that I will never make again!

What about the 12 volt batteries on your tractor, lawn mowers, ATV’s, etc.. during winter?

Some people remove them and store inside where it’s warm during the winter. This is a good idea. Better safe than sorry, right?

However, you can leave a lead acid battery installed during the winter. But only if the battery is in good condition, there is no parasitic load slowly draining the battery, and the battery is fully charged.

To be sure, I periodically trickle charge my lead acid batteries with the following charger. This is the 12-volt Battery Trickle Charger that I have been using for years. Love it… Actually I have two of them.