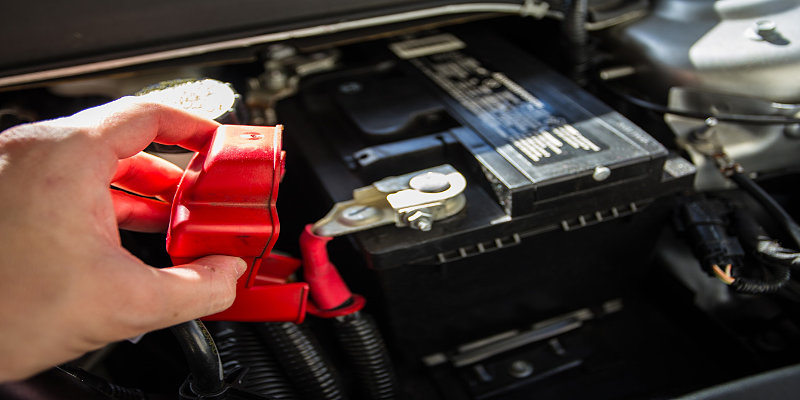 Most all new vehicles (for awhile now) have a built-in DC to AC power inverter. It converts 12 volts DC from your battery /alternator to 110 volts AC which is what’s in your home electrical outlets. This power inverter enables the use of relatively low power AC loads sourced from your vehicle. You might say it’s a source of emergency power. For the sake of preparedness (which is why I’m posting this).

My truck (10 years old now) has a 150 watt power inverter built-in. There’s an AC outlet at the console where I can plug in a AC powered device. The problem is as follows… 150 watts is not that much power. At least if you want to do something more serious with it. It’s enough for plugging in battery chargers for handheld tools and such, but you’re not going to run a lot with it. So, what to do?

Here’s a thought… Within the parameters of your vehicle’s battery and alternator specifications, you could physically connect a higher power DC-to-AC power inverter /converter directly to the battery terminal. In turn, you would enable a much higher powered alternative energy source for ‘whatever’. Maybe for use during an emergency (grid down) situation. Run an extension cord into the house to power your chest freezer for an hour – couple times a day to keep it cold (as just one example). At least until the fuel runs out in your vehicle…

Limitations To Size Of The Inverter

So, what are the limitations to achieving a higher power DC to AC power inverter for your vehicle battery?

One limit is the battery itself. The other is the alternator which charges that battery while the vehicle is running.

First, note this caution. Lets say you hook up a high power inverter directly to a 12 volt battery by itself (or a situation whereby the vehicle is OFF). Bear in mind that you won’t be able to operate it for very long (depending on the load). Also be aware that if the vehicle is running (alternator is charging), a load higher than the alternator specifications may eventually cause damage (more on that in a minute…).

If the vehicle is off, or for any stand-alone 12-volt ‘car battery’, you won’t be able to run a high load for very long. Here’s an example…

Mid-sized batteries for larger cars and SUVs are rated for around 50 amp-hours. Larger vehicles, such as trucks, can have batteries around 75 amp-hours. Typically, car batteries are rated in CA or CCA (Cranking Amps, or Cold Cranking Amps) and not in AH (Amp Hours) like a deep cycle battery which typically have higher AH ratings.

Lets say the car battery is rated for 50 AH (amp hours) (this is not CCA cold cranking amps). What this means is the car battery can technically deliver 50 amps for 1 hour. Or any combination thereof, like 25 amps for 2 hours. Or 1 amp for 50 hours. See how that works?

However! You don’t want to drain a lead acid car battery down below 50% if you can help it. NEVER drain completely, or you’ll damage or kill it. Instead, those consumption numbers exemplified above should be cut in half for the real world. So that would be, 50 amps for half an hour. Or 25 amps for an hour. Hopefully you get the math on that…

Ultimately, that’s not a whole lot of available power consumption over time (depending on what you’re powering) before the battery needs some charging.

But what about using the power inverter while the vehicle is running (alternator always charging)? Yes, you could run indefinitely up to a safe margin (amps) that doesn’t exceed your vehicle alternator rating (sort of… keep reading).

Use Power Inverter While Vehicle Is Running

High output alternators (often found on larger vehicles) can deliver between 200 to 350 amps. Smaller cars by comparison, may only use about 100 amps, or less.

How to find out how big your alternator is… The specifications may be in your vehicle paper work, or manual. Maybe you’ll find a part number to reference and research. Do an internet search on your vehicle. Contact your car dealer service department and ask. You may need your VIN for that.

I read (on the internet)(don’t believe everything you read) that you could simply add up all the fuse box values. That would be the magic number for max amps (current). Well, I was contacted by someone who has a 30+ year career in engineering management for one of the “Detroit 3” auto companies. I would like to quote some insight from this person as it has to do with vehicle alternators.

Alternator size is not determined by adding up the size of all the fuses, because all vehicle fused circuits have a “margin” where the fuse is some value above the actual current draw of that circuit.

The amperage output of the alternator is dependent on its “speed” i.e. alternator RPM. A car type alternator generally requires 2200 or more alternator RPM for full output (heavy truck alternators (like a Leece-Neville) are constructed to put out more power at lower RPM –it’s a tradeoff of cost/weight vs output).

Typical car alternator drive ratios (engine pulley size to alternator pulley size) are usually in the neighborhood of 2.5 /3 to 1.  So, at idle — (say 650 engine RPM), an alternator will likely not be putting out its max rated power. (again, drive ratio is a tradeoff of amperage required vs horsepower consumed by the alternator (think fuel economy), and max RPM capability of the engine vs overspeed of the alternator).

At the company I worked for, alternator sizing (output and drive ratio) is “calculated” during the design phase to pass a series of tests. But it is ultimately “proven”, and signed off via the real-world test. The certification test is a “worst case scenario”– it can be actually driven “on road”, or performed in a dynamometer-equipped-test-cell.

Higher RPM idle speed would likely correct this for a refer size load,  but is not easily done in modern cars because of the electronic control of the fuel flow (other than someone sitting in the car pushing on the accelerator pedal)

Lets say you have a 100 Amp alternator in your vehicle. Using ‘ohms law’ for 12 volts (although charging voltage is higher – but not necessary for this general conversation), that calculates to be 1200 watts of power.

Does that mean you can hook up a 1200 watt power inverter? No, I wouldn’t! The vehicle still needs its own power (though not too terribly much with all accessories turned off). And you definitely do not want to overload and burn out your alternator. I would estimate that 600 watts (half of the alternator rating) would likely be more appropriate in this example. (Do your own due-diligence for your vehicle alternator /charging system ratings).

As for your position of “50%” — I would think that’s a reasonable goal.

Given that there always is some outlier that will push the envelope– your recommendation is a cautious one, After all, in the business of “prepping”, one needs to recognize if things “go south”– what they have at that moment it likely all they will ever have, and pushing the limit of some item is likely to destroy it — and it’s no longer easily replaceable.

Where to hook up the power inverter? No, you don’t want to use the accessory outlet (formerly known as the cigarette lighter) for its DC power source input. Those are typically fused for ~10 amps. That’s only 120 watts at best.

Rather, you do want to connect your higher power inverter directly to the battery terminals, along with appropriate gauge wire to handle the amps (current). The user manual will most certainly suggest which AWG (American Wire Gauge) size to use – versus total length involved between battery and power inverter.

For temporary power, here’s an example of a power inverter that has alligator battery clamps for direct connection. Obviously that would be temporary. But you could wire this in permanently as well.

If you have a truck, chances are that your alternator may be higher powered than just 100 amps (depending on your options). My F350 has two batteries and a 200 amp alternator. So, that’s 2400 watts. In theory I could connect a power inverter in the range of about 1200 watts and not worry too much about it, so long as everything isn’t on at once. Maybe something like the following…

Anyway, hopefully you get the idea. It’s simply another way of getting some emergency (or regular use) power if and when you might need it from your vehicle car battery.

By the way, you want pure sine wave. It generally doesn’t cost that much more… Don’t get modified sine wave (in my opinion).