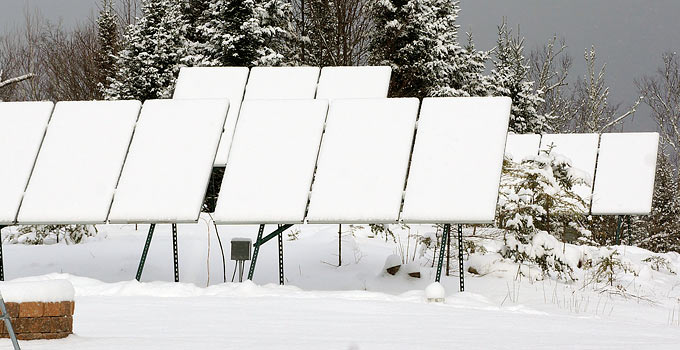 (time to sweep the solar panels)

When doing any sort of design or even “back of the envelope” calculations for alternative energy systems (e.g. solar), among the important factors to consider are these:

I’m going to try and keep it simple…

Anything that ‘plugs into the wall’ requires a certain amount of power (watts) to function. Some things require more power than others. When designing solar power (panel) requirements, you need to figure out the demands of the things that it will be powering.

Likewise if 8 of those light bulbs are on together, the power requirement will be 80 watts.

Every single thing that ‘plugs in’ has it’s own power requirements.

But it doesn’t stop there…

Not all devices or appliances require the same amount of power at all times. In other words there may be a variability of power (watts) that a given device demands over time.

An example of this is my pellet stove. When it first goes through the igniting process, it requires nearly 400 watts. But after the pellets are burning, the fans might only require 50 watts. Not only that, but the fan speed is variable. If I crank up the stove it will begin demanding more power (watts) because the fan speed increases. Make sense?

This is true of many appliances.

That said, any given ‘thing’ will have a specification indicating it’s maximum power requirement (a sort of worst case scenario). Usually this is printed somewhere on the literature or a label on the device itself. I’ve sometimes found that there may be a fairly wide margin built into those published specs.

Which brings us to the next category:

Especially for a solar power system that will include energy storage (a battery bank) it is critical to understand the power requirements over time so that you have enough capacity to keep things running when there’s no sun!

If I leave that 800 lumen 10 watt LED light bulb on for 6 hours a day, that bulb is consuming 60 watt-hours of energy.

That’s pretty straight forward because the LED light bulb always draws the same amount of power – all the time when it’s on.

Similarly, A TV that draws 200 watts, when it’s turned on for 2 hours per day the energy requirement is 400 watt-hours.

The calculations for the energy demands of devices over time (watt-hours) gets tricky when you have appliances that draw varying amounts of power while they’re on. This includes a refrigerator, chest freezer, a washing machine. Many others too.

Additionally some may cycle on/off throughout the day.
Still others may not be used every day.

So it takes some thought, measurements, and a spreadsheet to help figure things out!

When I designed the solar powered alt-energy system for my current home, I literally measured the power and energy requirements and demands for every single thing that ‘plugs in’ at my home. Once entered on a spreadsheet there are all sorts of helpful calculations that you can make.

How did I do that? It was easy! (although time consuming)

I used a watt meter that measures and displays Watts as well as energy over time (watt-hours).

I’ve had this one for years:
P3 P4400 Kill A Watt Electricity Usage Monitor

Note: If I were to buy a new one today, I would probably get the following, because it also keeps track of the cumulative time. But no big deal if you make a note of begin and end time (if that’s important for your test) :

Note: Appliances like refrigerators, chest freezers, and air conditioners will require a surge of power when the compressor kicks in. This can be up to 10 times the average running watts. Factor this into your system design (inverter).

When I figured how much power (watts) might be required at any one time throughout the day for my own home, I did not simply add up everything as though ALL devices were turned on at the same time. I knew that this would never be the real case scenario. So I simply looked at it from the perspective of realism. I made my own estimations.

Note: In a well designed system, there are circuit breakers which will trip if you did exceed the system’s capabilities. So if you did decide to run everything at once, you’re safe under that presumption ;)

I also factored the season and time of day (day / night) while determining a reasonable maximum watts requirement.

I also have a battery bank so that I can selectively run ‘off-grid’ when I choose to.

In order to determine how big a battery bank that you might need, there are lots of considerations including,

That said, for this discussion I’m just looking to understand how much energy (kWh) or Kilowatt hours that may be consumed in a 24 hour period, on average.

Tip: It’s cheating (sort of) but you can look at your past electricity bills to discover this information. However I looked at it from a fresh perspective – understanding the individual requirements is very helpful.

Having built a spreadsheet with the measured devices and appliances, it becomes fairly easy to calculate. Once you assign a reasonable number of hours per day that any one thing might be ‘on’, then it’s a matter of adding it all up.

Once you know your total energy demands (kWh) you can then begin to design a battery storage bank that will keep you powered up at night, and longer if you design it that way (just more $).

Hopefully this information will help some of you out there who may happen across this page while searching for answers how to get started with solar power and energy requirements.

More: The Four Essentials of Off Grid Solar