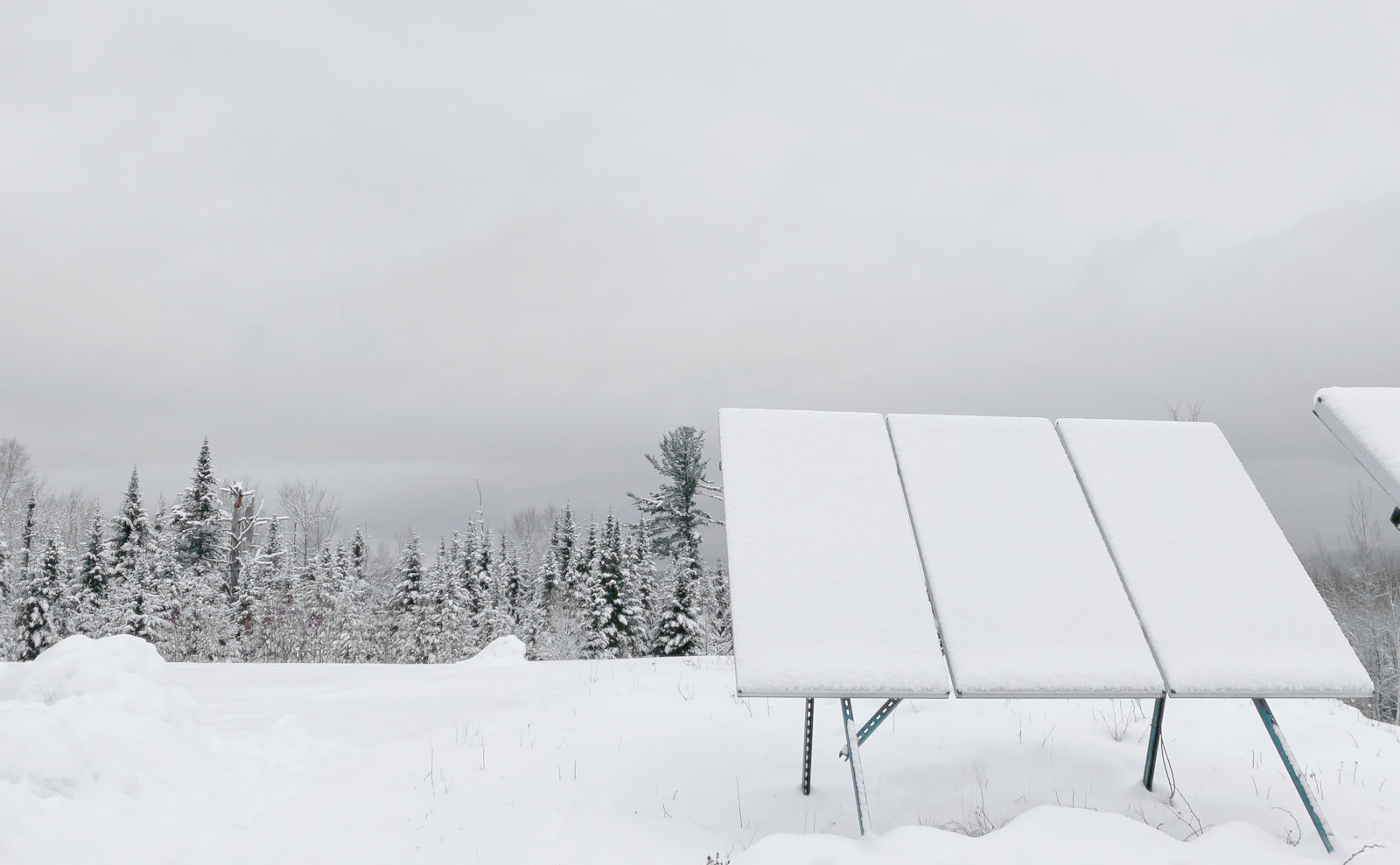 It’s a constant battle here in the mountains of New Hampshire. As you can see by the picture I took this morning, I’m sure glad that I have my solar panels mounted on ground mounts. For snow removal!

One of two types of weather events will prompt me to get out the broom and get to work on removing the snow from my solar panels:

I live in the mountains. Mountainous areas have their own unique weather. While a major winter storm will affect a significant part of an overall region, these mountains create pesky snow showers that accumulate over time. This frequently results in an inch here, two inches another day, half an inch the day after that… The next thing you know you’ve got another 6 inches more on the ground after a week of this (without a “snow storm”).

This is one reason why I decided NOT to mount my solar panels on the roof. Rather, I built my own ground mounts.

It’s not rocket science removing the snow. I use an ordinary floor push broom. The standard handle length is enough for me to simply pull the snow down from top to bottom.

Once the dark panel surface is partially exposed, the sun will usually enhance the melting – finishing the job. However, if it’s too cold, it’s not going to happen. But eventually it will.

As you can see in the picture below, this morning I swept the panels. But there was still some frozen stuff near the bottom. Today is very overcast and cloudy. 25 degrees. It’s not going to melt. But that’s okay, I’ll still get ‘some’ bit of charge.

Removing Snow From Solar Panels Mounted On The Roof

What if your solar panels are on the roof? How do you get the snow off? Well, for the most part, you can’t. However, I will offer some advice (opinion)… something I do on my own roof when snow accumulates during the winter…

I use a snow rake to pull snow off the roof. I don’t do it all the time. Only if it’s getting deep and I’m concerned it’s not going to melt off or blow off (even partially) before the next snow storm.

I have not tried this on roof mounted solar panels. Just saying… However, it ‘should’ help. But be careful whenever doing this. Don’t be stupid and hurt yourself. I’m lucky in that I have a deck going the length of the house and I can reach the roof with the long pole of the snow rake. It depends on your own home and roof.

Tip: It’s a pain in the you-know-what. Just pull a little at a time – depending on the type of snow.

This is the one that I have:

There are a number of ways to mount your solar panels. Typically, the solar panels you see on the roofs of houses are simple “Grid Tie” systems. Solar energy is fed back into the grid and you get credit for it. If it snows, no big deal. You’re running off the grid anyway.

However if you’re Off Grid, or have a side-by-side Off Grid energy system with transfer switches (as I do), snow becomes a pretty big deal. Winter is difficult enough with fewer hours of sunlight and low angle sun. Snow just makes it all worse.

So my recommendation to anyone setting up Off Grid solar power, if you’re in a snow zone, consider your solar panel mounting methods with regards to snow removal.

[ Read: Snow On The Roof May Literally Weigh Tons – Here’s How Much ]

[ Read: Grid-Tied Solar Systems Don’t Work Well When The Grid Is Down ]