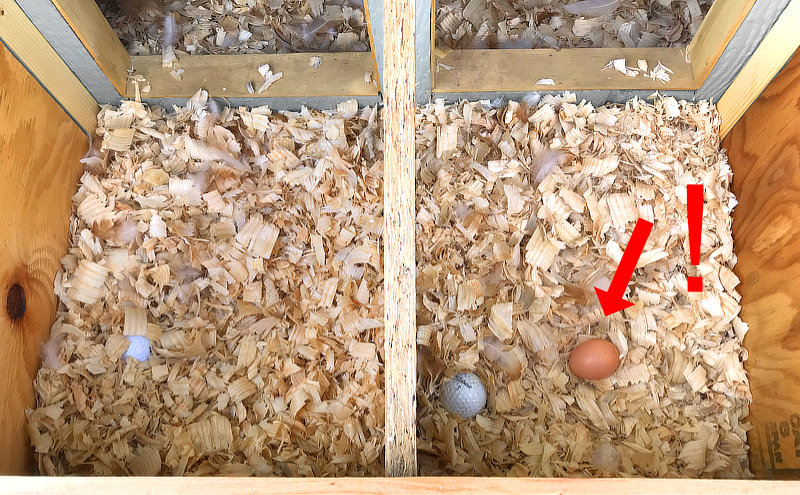 Yay! I scooped up the first egg of a hopefully productive flock of ISA-Brown hens. Actually, I need to call them pullets… A pullet is a hen that’s less than a year old.

The first egg came at 16 weeks of age. That’s one thing about the ISA-Brown’s — they’re not only prolific egg layers, but they start on the early side compared to other breeds.

Ironically, the day I wrote the article, “Chickens First Time Out Of The Run” I had said, “Still waiting on their EGGS!”. Well, later that day the first egg magically appeared!

That was five days ago. Now we’re up to six eggs as of this morning. At “full production” we should be at 6 or 7 a day. It’s ramping up!

Interestingly, all eggs so far have been in the same nesting box…

The first eggs are going to be small. And they are. You can see the size of the first egg next to the golf ball in the photo above. Eventually they should become nice and big.

“Hey Ken, how did those first eggs taste compared to store bought eggs?”

I’m glad you asked! Though surely they’re going to be even better tasting as the pullets get into good production and bigger eggs, these tasted great! Hard to explain, but they just tasted fresher, more like an egg — if that makes sense…

It’s going to depend on their feed too. Now they’re eating a combination of egg layer pellets from Tractor Supply – and increasingly the grasses and whatever they might find in their fenced-in open range area.

Anyway, I thought I would share the experience with you now that we’re finally getting some eggs.