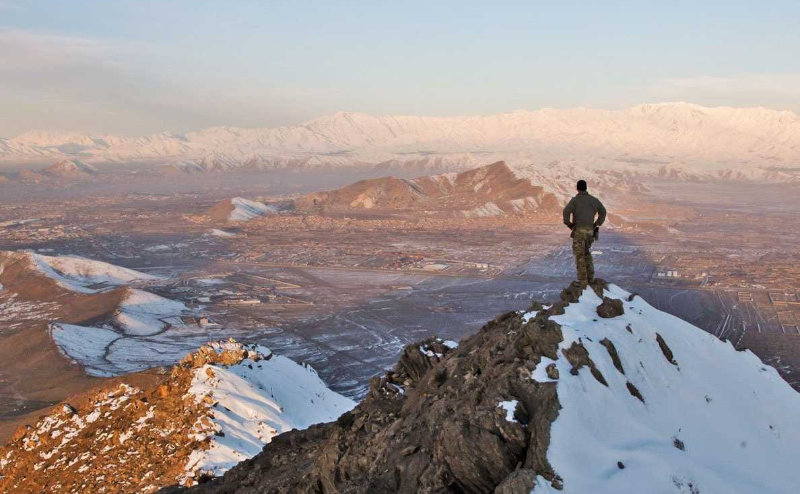 I’m talking about the typical consumer handheld ‘walkie talkies’ (2-way radios). Manufacturers claim all sorts of supposed achievable communication distance or range… Such as “up to 16 miles”! How can they claim that?!

In reality, or the real world, these radios never come close to the acclaimed range and distance. Do you have any of these 2-way radio “walkie talkie” handheld radios? If you do, then you know I’m right. So what gives? What’s the deal?

Well, read on… here’s the deal…

As is typical with marketing of just about any product, they stretch the truth. And that’s often an understatement.

In the case of claiming a potential communication distance of “16 miles”, for example, here’s the only way that could ever happen…

Do you see that picture at the top of this article?

If you’re on top of a mountain with a completely unobstructed line-of-sight to the receiver – while transmitting at maximum allowed signal strength – in perfect conditions. In other words, horizon is not a factor. Perfect conditions. That’s the only way you’re going to achieve what is technically achievable.

However while living in the real world, you’re probably not on a mountain.

To be fair though, 2-way radio ‘walkie talkie’ communication distances can be pretty good for practical use if you have a decent radio and if there’s not too much in the way between the two parties.

We denote wavelength by Frequency > how many complete waves go by per second.

These consumer handheld 2-way radio walkie talkies transmit and receive in the UHF (Ultra High Frequency) range. I’m not going to go all technical on you. But, the consumer walkie talkie band we’re talking about here is called FRS (Family Radio Service), and the GMRS band (General Mobile Radio Service).

There are frequencies (channels) that have been reserved for these types of consumer FRS/GMRS 2-way radios. They are in the 462 and 467 (Megahertz) MHz range. I only bring that up to translate into it’s wavelength (I won’t bore you with how that’s done). We’re looking at about 2 feet full-wave, about 1 foot half-wave, and about 6 inches for a one-quarter wavelength.

When that invisible wave travels through the air, it gets impeded (attenuated) every time it “hits” something in the way. Trees will reduce the transmitted signal. Houses and Buildings. Metal. Etc..

Whereas lets say professional commercial “business radios” (and VHF Marine radios) operate within the general range of 150 – 174 MHz, their wavelengths are longer. 76 inches at 155 MHz. Although we’re still talking “line-of-sight” for these radios, because of the longer wavelengths they are better able to get past those obstacles than FRS/GMRS.

2 meter Ham radio, for example, is between 141 and 148 MHz. 144 MHz is 82 inches full wave. Similar to the aforementioned “business band” frequencies, these wavelengths are better than FRS/GMRS at getting past those obstacles. But I digress…

I only bring it up to illustrate that the range of “walkie talkie” frequencies (FRS/GMRS) can be affected due to its frequency and wavelength – depending on one’s environmental obstacles (and their characteristics).

How far away can I talk on walkie talkies?

Anyway, without going all tech on you, here’s the most important things for optimizing your range on ordinary consumer handheld walkie talkies (FRS and/or GMRS)…

As it is with both UHF and VHF radios, we’re talking line-of-sight communications. The number one way to get longer range is to get higher up. Consumer handheld radios don’t generally have a way to utilize installing a better or external antenna (legal issues). So height above ground will simply be your own physical location and how high up you are while you use your handheld radio.

The antenna is very important. Some radios may have a better antenna than others. If we were talking about radios other than consumer walkie talkies, the topic of antenna importance would be significant. However these consumer type handheld radios don’t have interchangeable or upgradeable antennas. You’re stuck with what you get.

Without stepping into potential legalities, you might say that the following handheld 2-way radio works quite exceptionally well for FRS / GMRS comms.

Here’s one article that I wrote which addresses its antenna upgrades:

Obstacles in the way. It matters. What they are, matters. Their physical properties, density. It’s pretty common sense. For example, your transmit range will be much more reduced through a dense forest compared to a partially treed area. Or open fields!

If there’s a big hill in-between you and the other person, that’s going to be a big problem.

Transmitting from one person inside a home or building to someone outside will also reduce some range (walls within the house).

I think you get the idea. Out on the open range, you’re going to get good distance. Otherwise, not so much.

Transmit power is less effective for optimizing range than the previous mentioned things.

To the best of my current understanding of FCC rules for transmitting power on unlicensed FRS/GMRS is limited to 1/2 watt on some channels (8-14) and up to 2 watts on others (1-7, 15-22).

It is important to note that some of the consumer radios do not transmit up to the maximum allowable power. It’s sort of like, you get what you pay for…

Enough Already! What’s the Distance for Transmitting on these Radios?

Here are my estimates for approximate real world range for FRS/GMRS walkie talkies at 1/2 watt.

In the woods, 1/4 mile to 1/2 mile, maybe more, greatly depending on terrain and obstacles.

Let me know your own experiences with range for these radios in the comments below.

I have only been talking about FRS/GMRS consumer walkie talkie radios. GMRS distances can be greater due to increased power if you’re licensed (no test, just a form and fee). But that’s for another post. There’s also MURS (only 5 channels though, and other annoyances I’ve encountered). Then there are Marine radios. Business band radios. And of course, Ham radio. But all that is beyond the scope of my intent here.

This one is a step up, higher power on permissible channels, and also very popular:
>> Motorola Talkabout T465

There sure are a lot of these radio choices out there. Way back when, years ago, I bought a set of Midland’s that worked out well for us. I still have them (actually 4). I also have purchased a number of Baofeng’s which I like much better (though require some technical know-how to use to their fullest capabilities).