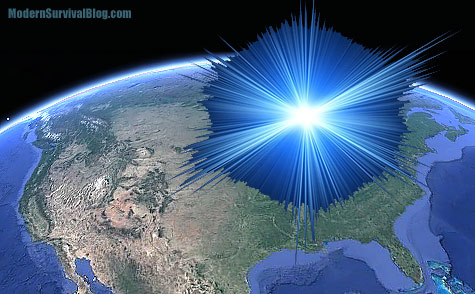 While exploring the possibilities of protecting such equipment from an EMP, I discovered that a nuclear EMP consists of three parts, three components, or three pulses (not just one…).

I thought I would share with you some of the basic detail, and to identify which of the three pulse components is the most difficult to protect against…

Note: The effects of a high altitude nuclear EMP detonation depend on the altitude of the detonation, its energy yield, gamma ray output, the interactions with the Earth’s magnetic field, and electromagnetic shielding of targets.

The following information summarizes the pulse components themselves:

E1 Pulse of a Nuclear EMP

The E1 pulse is the first of three pulse components of a nuclear EMP, and is very fast. This initial pulse is very short in duration but is a very intense electromagnetic field that induces very high voltages in electrical conductors, semiconductors — ‘solid-state’ electronics, microchips and integrated circuits, etc..

E1 causes most of its damage by causing the ‘electrical breakdown’ voltages of semiconductors to be exceeded. Zapped… Permanently.

What causes the E1 pulse?
E1 is produced when gamma radiation from the nuclear detonation ionizes (strips electrons from) atoms in the upper atmosphere. The electrons travel in a generally downward direction at nearly the speed of light. The Earth’s magnetic field deflects the electron flow at a right angle to the field, and this interaction produces a very large, but very brief, electromagnetic pulse over the affected area.

How strong is the E1 pulse?
The E1 pulse near ground level at moderately high latitudes may reach peaks of about 50,000 volts per meter!

E2 Pulse of a Nuclear EMP

The E2 component has similarities to lightning.

What causes the E2 pulse?
The E2 component is generated by scattered gamma rays produced by neutrons.

How fast is the E2 pulse?
E2 lasts from about 1 microsecond after the explosion to 1 second after. So it’s rather slow (comparatively), about 1 second.

How strong is the E2 pulse?
Apparently substantially less than that of lightning.

E2 is generally considered to be the easiest to protect against.

It’s mostly irrelevant though because since E2 immediately follows E1, the devices will probably already be ‘toast’.

The EMP Commission Executive Report of 2004 states, “In general, it (E2) would not be an issue for critical infrastructure systems since they have existing protective measures for defense against occasional lightning strikes. The most significant risk is synergistic, because the E2 component follows a small fraction of a second after the first component’s insult, which has the ability to impair or destroy many protective and control features.”

E3 Pulse of a Nuclear EMP

The E3 component is slow.

What causes the E3 pulse?
It is caused by the nuclear detonation’s temporary distortion of the Earth’s magnetic field and has similarities to a geomagnetic storm caused by a solar flare.

How fast is the E3 pulse?
E3 lasts from tens of seconds to hundreds of seconds.

Interestingly, a nuclear weapon designed to be used as an EMP weapon (smaller, simple and efficient) is generally poor at producing an effective E3. Whereas thermonuclear weapons (hydrogen bombs) are very inefficient at generating the fast-rise-time E1 pulse, they are much better at generating the slower geomagnetic-storm-like E3 pulse – which induce large currents in long electrical lines.

The E1 pulse of a nuclear EMP weapon is what will do the most damage. While it is relatively easy to protect against E2 and E3 (‘easy’ is a relative term), it is quite difficult (or impossible) to effectively protect against E1 for functioning electrical systems.

Note: A ‘Faraday Cage’ enclosure if designed properly may protect (shield) electronic and semiconductor equipment which may be stored and protected for the purpose of having backups for external systems which themselves may be exposed while functioning day to day. But that’s an article for another day…

I had researched and discovered the information above while deciding how best to protect my PV solar panel system from EMP. To that end, I have inserted what I expect to be adequate protection for E2, while E3 should not be an issue. E1 however is THE problem. Even the best and fastest surge protectors that I have installed will not clamp down quickly enough to stop the potential damage from E1. Therefore the issue does not become one of protection (of the functioning system), but one of ‘backup’ components…in a Faraday Cage (e.g. a Faraday constructed ‘shed’).