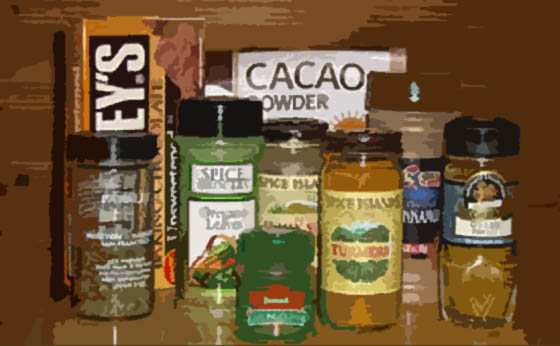 The following spices (cloves, cinnamon, oregano, turmeric) have a particularly high antioxidant ORAC value – meaning they may be beneficial from a health perspective, given their antioxidant (and other) properties.

First, what is ORAC? It is an abbreviation for Oxygen Radical Absorbance Capacity and was developed by the National Institutes of Health in Baltimore, some years ago. In short, ORAC units measure the antioxidant capacity of foods.

Technical: ORAC values are listed as (µmol TE/100g) (micromol Trolox Equivalent per 100 grams). Trolox equivalency is used as a benchmark for the antioxidant capacity.

The following information has been partially sourced from what I believe to be reputable sources. This is not medical advice. Rather, food for thought, intended for informational purposes only.

Many herbs and spices are excellent sources of antioxidants. Cloves rank very high in this area. Cloves contain a compound called eugenol, which has been shown to act as a natural antioxidant. In fact, a test-tube study found that eugenol stopped oxidative damage caused by free radicals five times more effectively than vitamin E, another potent antioxidant (source).

Here’s a tip: Toothache pain relief. Bite on a few cloves before you can get to the dentist, to alleviate pain. Be sure not to swallow them!

Available in both whole and ground forms, this spice can be used to season pot roasts, add flavor to hot beverages, and bring spicy warmth to cookies and cakes. Typically, they are added to apple pies and they can also be added to other fruit pies that need a warm, spicy flavor. Poke them into a ham. Use them with pumpkin and squash dishes. Indian cuisine too.

True cinnamon is called Ceylon cinnamon, and it comes from Sri Lanka.

Cinnamon is a spice that is made from the inner bark of trees scientifically known as Cinnamomum. Dating back as far as Ancient Egypt. It used to be rare, valuable, and was regarded as a gift fit for kings.

The distinct smell and flavor of cinnamon are due to the oily part, which is very high in the compound cinnamaldehyde. Scientists believe that this compound is responsible for most of cinnamon’s powerful effects on health and metabolism.

Several studies suggest that cinnamon may have a regulatory effect on blood sugar. Therefore potentially beneficial for people with diabetes. In some studies, cinnamon has shown an amazing ability to stop medication-resistant yeast infections. In another study published by researchers at the U.S. Department of Agriculture in Maryland, cinnamon reduced the proliferation of leukemia and lymphoma cancer cells. It also has an anti-clotting effect on the blood. In a study at Copenhagen University, patients given half a teaspoon of cinnamon powder combined with one tablespoon of honey every morning before breakfast had significant relief in arthritis pain inflammation after one week – walking without pain within one month.

I searched the NIH National Library of Medicine articles regarding cinnamon. The search returned more than 15,000 articles! (source)

You’ve gotta have lots of this spice! That is, if you dump it rather than sprinkle it ;)

Oregano is known to have strong antibacterial properties. Perhaps as a result of the volatile oils the herb contains. Oregano essential oil is especially high in carvacrol and thymol, two antioxidants that can help prevent damage to cells caused by free radicals (source). These same compounds have also been shown to decrease the activity of viruses in some test-tube studies.

Test tube studies have shown that oregano may inhibit the growth of many species of bacteria. Oregano’s high antioxidant compounds can not only neutralize free radical damage, but they may also aid in cancer prevention. One test-tube study treated human colon cancer cells with oregano extract and found that it stopped the growth of cancer cells and helped kill them off (source).

Note: Keep in mind that these were test-tube studies using high amounts of the herb and its compounds. Human studies using typical doses are needed to determine its effects. (And there’s no big $ to be made in uncovering natural or inexpensive remedies).

A fed days ago I made a homemade sauce from a tomato base (stored from this year’s garden). In addition to the added sautéed sweet (and spicy) sausage, I included a generous portion of oregano! Sprinkle it over pizza. Stir it into a soup. Use in dry rubs. Sauces. With roasted bell peppers. Vegetables. Italian foods. Tomato based dishes – Chili. Baked chicken with lemon and oregano.

Turmeric is the spice that gives curry its yellow color. It has been used in India for thousands of years as both a spice and medicinal herb. Curcumin is the main active ingredient in turmeric. It has powerful anti-inflammatory effects and is a very strong antioxidant.

Curcumin is poorly absorbed. It helps to consume it with black pepper, which contains piperine. Piperine is a natural substance that enhances the absorption of curcumin by 2,000%.

Research has revealed that turmeric is a natural wonder. It is a potent natural anti-inflammatory. It is a natural antiseptic and antibacterial agent. Also useful in disinfecting cuts and burns. It is a natural liver detoxifier. It may prevent and slow the progression of Alzheimer’s disease by removing amyloid plaque buildup in the brain. Turmeric has been shown to stop the growth of new blood vessels in tumors. A benefit of curcumin when it comes to heart disease is improving the function of the endothelium, the lining of your blood vessels.

Here’s something interesting… Curcumin can boost brain-derived neurotrophic factor. Many common brain disorders have been linked to decreased levels of BDNF protein, including depression and Alzheimer’s disease. Animal studies have found that curcumin may increase brain levels of BDNF (source). Thusly, it may be effective in delaying or even reversing many brain diseases and age-related decreases in brain function. Still, since these studies were performed in animals, it’s hard to say what the results mean for humans.

Turmeric — and especially its most active compound, curcumin — have many scientifically proven health benefits, such as the potential to improve heart health and prevent against Alzheimer’s and cancer.

Toss it in with roasted vegetables. Add it to rice. Us it in soups. With fried eggs (I do this fairly often – with pepper). Coconut chicken curry with turmeric. Sprinkle on salmon. Turmeric ginger chicken soup. Blend a teaspoon into a smoothie. A natural in curries. How about a half-teaspoon into the cheese sauce of mac-n-cheese… Turmeric cauliflower soup.