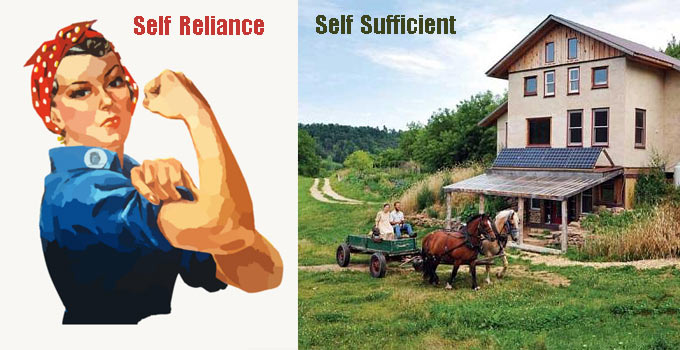 What’s the difference between self reliance and self sufficiency?

That’s a good question! People tend to use these terms interchangeably.

However if you dig into it a bit, there is a difference in their meaning.

Someone on the blog (Dennis) once defined it as this…

“I believe that many in the prepper community are like myself, that is, someone who has always been “self reliant”. My simple definition of being self reliant is someone whose first thought when a problem arises is to take care of it yourself, not to call in an “expert” or professional. Following this philosophy leads to acquiring skills in many fields. Not necessarily becoming as skilled and knowledgeable as someone who does these things for a living, but good enough to take care of things as they arise.”

Self reliance is relying on one’s self. One’s own powers. It aspires towards non-dependence. It’s a quality. A personality characteristic. It’s about “you”.

Note that what one makes, obtains, or gets, may be more (or less) than what is “sufficient”.

“Self sufficiency is a natural progression of self reliance. Growing or fabricating life sustaining necessities, or eliminating the supply chain we have become dependent on. That is infinitely tougher than being self reliant. Thus the attraction to sites like MSB, where folks can share their trials, errors, and successes as they travel that road to self sufficiency.”

Being self sufficient is either obtaining, having, or producing the resources one needs.

Self sufficiency (sufficient). Sufficient quantities of what one needs.

Self Reliant vs Self Sufficient

Given the variance or distinction between the two definitions above, you might say the following:

Both self reliance and self sufficiency are about you.

“I can be both self reliant and self sufficient, to varying degrees.”

Self reliance involves the conviction, dedication, fortitude, and skills in order to reach or aspire towards a goal (or result) of self sufficiency. Or the extent thereof.

I look at self reliance as being more about a person’s determination and skill whereas self sufficiency is more about the resources, the results, the stuff.

It’s you and your self reliance that may lead to obtaining or producing resources.

Does that make sense?

Can You Really Become Self Sufficient?

Even with a self reliant attitude and skill sets, can you actually truly become self sufficient in terms of survival resources?

To varying degrees of extent. But I would say that true self sufficiency is nearly impossible for most people. Most all of us require some extent of outside help and production.

It certainly and definitely is NOT easy (to get closer to self sufficiency). However each and every baby step that you take is a step in a good direction in terms of being better prepared for external systems breaking down. Weaning yourself off of dependence.

Dependence on what? Well that’s up to you. There are LOTS of dependencies living in today’s modern world.

In fact, given our massive population and dense urban, suburban regions, there’s no way so many people could survive without modern dependencies and system “flows” into the region, for example.

These are just some of the basics. But to become self sufficient even marginally in these areas will require a great deal of good old self reliance for starters. Then, actions, time, efforts, commitment.

Self Reliance & Sufficiency Beyond Just “You”

Note that self reliance and self sufficiency can apply to more than just “you” (or one person). It might also refer to a group. Perhaps a neighborhood. A region. A country. Get the idea?

However most discussions with these terms within the prepper / preparedness realm often deal with the singular person or smallish groups. I’m just pointing out how it can apply to a ‘bigger picture’.

Just like how the Unites States once was pretty self reliant and self sufficient. Today much or most of our ‘stuff’ is from other countries. But I digress.

I just wanted to point out the distinction between these two terms, at least how I view it.

Self sufficiency goes back to the origin of mankind, the beginnings.

As a college educated follower of the sciences, the one thing I agreed with Charles Darwin’s theory was the survival of the fittest. The combination of intelligence and a gradual learning of techniques of survival led to where we are today.

There was a huge mortality rate during the early days of that journey from living in caves, making of improvised rudimentary tools, and nomadic hunting and gathering, to where we live now. Only the strong survived.

Modern society has “evolved” though, to where the strong subsidize the weak, and the weak have grown in numbers to the point that they demand more and more of those that produce.

If and when that support system is suddenly pulled out from beneath them, chaos will prevail…… for a while. Then the process repeats itself.

[ Read: Can You Even Imagine The Pioneer Family Surviving The Frontier? ]