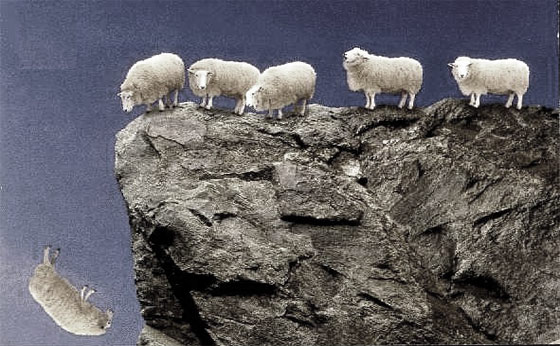 Most people are followers – not leaders. That should come as no surprise. It’s just the way it is. Similar to the behavior of dogs who will follow a pack leader, most people tend to follow others – their pack leader – even blindly. Blind followers though, are a special kind of follower. And there’s no shortage of them today. That’s one big reason we’re in this mess.

Too Many Blind Followers

I suppose that if you put 100 leaders in a room, nothing would get done. My gut instinct tells me that maybe 5 or 10 percent of people might be so called leaders, or have characteristics thereof. But progress needs its followers.

So does that mean that the 90 to 95% of the rest are blind followers? No. Being a follower is not a bad thing. But I do suspect that a majority follow ‘blindly’ (easily persuaded or swayed), while some lesser percentage may ‘think’, challenge or question some or much of the time – while still being mostly a follower. The thing is, so many people don’t want to be “unpopular” or “different”, so they go with the group – a blind follower.

I know quite a lot of followers who defend their abusive and corrupt leaders. I call them the mob because they threaten, they lie, they cheat, anyway possible to gain power and privilege.

It is natural for people with common behaviors/interests to form groups with the same behaviors/interests, and follow a leader of that group. Whether it be a good or bad group, they all have something in common within their group.

That’s where independent thinkers are different. They follow their conscience, not with the mob and it’s leaders.

Most people have a need to have their peers recognize and approve their lives. The herd mentality is hard wired in most.

Thinking for ones self leaves most people feeling lonely and disconnected, thus most people will follow a herd of others, even if it results in loosing free thought and action. This is why it is easy for the herd leaders to manipulate their herds with such ease.

Bad Leaders and their Blind Followers

Not all leaders are bad. Certainly many are, and have been, very good. Society as a whole has benefited from many of them in all walks of life.

However, some leaders take their position and abuse it. Some leaders are ‘extreme’ or become extreme. Not all leaders have good intentions. Some leaders are gifted with more charisma than others, and may abuse it nefariously to sway the pack of sheeple.

Apparently about 3 out of 100 people are sociopaths, some of whom are psychopaths. They tend to gravitate towards a desire to ‘lead’. Control. Politics. World history is rife with this type. Hundreds of millions of their blind followers have perished as a result. (And history has a tendency to repeat).

Some ‘followers’ have personality traits such as loyalty and obedience, which can be beneficial. But if taken too far can lead to becoming an unquestioning blind follower, regardless of where their leader is going or doing. Powerful leaders (or a leader) with legions of unquestioning followers can lead to very bad places… Just look back through history. It always ends with misery and death.

Not sure how many followers are ‘blind’ followers, but I believe there are more blind followers than than skeptical more independent-thinking followers.

Many are easily convinced, or blindly swayed by information having the appearance of coming from ‘authority’. The authority figure or figurehead.

For example, one major influence being what many call “the mainstream news” and their talking heads on TV. Blind followers have no clue that much of it is pure propaganda, directed by the few who own 90% of it all. And this is just one example of many – although a significant one.

Easily manipulated and influenced, blind followers will subsequently ‘fall in line’. They march in lock step behind their leaders and their propaganda. Those who ‘follow along’ like a leaf in the wind will always blow in the direction of the crowd. Count on it.

Blind Followers Are Very Bad For A Healthy Society

So what’s the point of all this?

I am concerned about the apparent large percentage of today’s blind followers.

I am concerned about the leaders and followers of the many evil cults invading, splitting, and dividing the people. The worst of which is the cult of the satanic globalist elite who have set upon this world a Great Reset. The Covidian cult has been one of their means in this regard. There are many other cult-leader-follower examples too. However, bad things happen when there are too many blind followers. Especially when they cannot, or refuse to, ‘see’.

We are living in a society where questioning so called authority is taboo. A bad thing to be punished. We’re living in a world today which does its best to shape people into good little blind followers. Sheeple. Trained and taught NOT to think for themselves. Instead, they must think as the State tells them to think. If not, then punishment is demanded as an example to others who might be considering similar non-conforming actions.

I am concerned that independent thought, critical thinking, and any challenges that go against the cult narratives – it’s all being punished and snuffed out by very powerful entities – who themselves control governments all around the world.

A healthy society is one in which their are fewer blind followers and more independent thinkers.

The question is, can the blind be healed to see again?

[ Read: Don’t Ever Trust The Scorpion ]