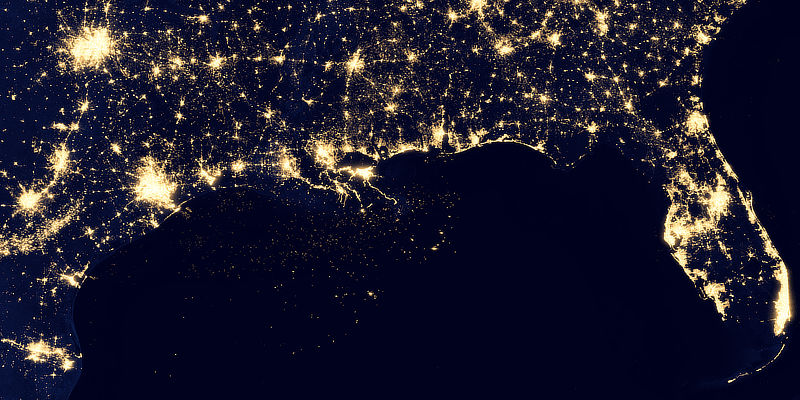 A fascinating high resolution satellite view of city lights / urban regions of the USA at night. I first saw this during 2012 when NASA-NOAA released incredible satellite images of earth at night. I believe they named the project “The Black Marble”. I’ve also read the project simply described as Earth At Night.

It’s a global view of Earth’s city lights. A composite assembled from data acquired by the Suomi NPP satellite. The data was acquired over nine days in April 2012 and 13 days in October 2012. It took 312 orbits to get a clear shot of every parcel of Earth’s land surface and islands. The data was then mapped over existing Blue Marble imagery of Earth to provide a realistic view of the planet.

The satellite view of the USA at night reveals urbanized areas. For the most part, that’s also related to population and population density.

It’s interesting to see that cities tend to grow along coastlines and transportation networks. The United States interstate highway system appears as a lattice connecting the brighter dots of city centers.

With regard to prepping and preparedness, population density is one input of many. And this satellite view provides a nice visual where you may happen to live with comparison to the region around you (at least as it appears at night). So I thought I would share it with you.

“Nighttime light is the most interesting data that I’ve had a chance to work with,” says Chris Elvidge, who leads the Earth Observation Group at NOAA’s National Geophysical Data Center. “I’m always amazed at what city light images show us about human activity.”

I have sourced what I believe is the highest resolution image of the United States at night (from this project). It’s too big to fit on this post, but I will link to it so you can download it if you want.

Or have a look at a higher resolution image that I resized from the original:

Or take a look at the high resolution image of the USA at night, at least the one released to the public:

Okay, this is the coolest thing of all… I found a website which uses the 2012 NASA project’s highest resolution imagery (and that of others) whereby they’ve processed it, and created an interactive zoomable map (e.g. using your mouse wheel).

Unlike just the raw images, this map overlays what looks like every single city and town as you zoom further in. If you know where to look, you can find your own town. As you zoom in, you’ve got to give it some time to download and ‘catch up’ (depending on your internet speed).