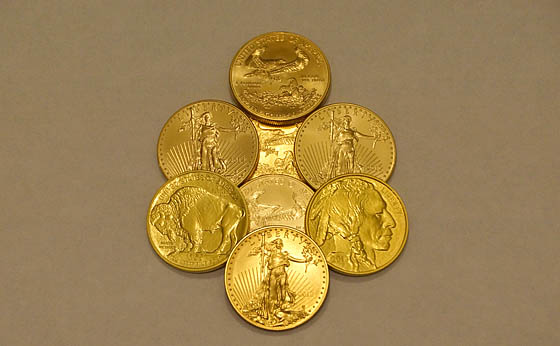 While owning physical gold may not be for everyone due to it’s cost versus one’s budget and resources, there are a number of logical and sound reasons to own some gold.

Gold is a chemical element with the symbol Au and atomic number 79. It is a dense, soft metal with a bright yellow color and luster – the properties of which remain without tarnishing when exposed to air or water.

According to a Smithsonian report of research conducted by the Harvard-Smithsonian Center for Astrophysics, all the Gold in the universe came from the collisions of neutron stars.

Gold has been a valuable and highly sought-after precious metal for coinage, jewelry, and other arts since long before the beginning of recorded history.

A total of 174,100 tonnes of gold have been mined in human history, according to GFMS (Gold Fields Mineral Services) as of 2012. This is roughly equivalent to 5.6 billion troy ounces.

All gold ever been mined throughout history is only equivalent to a cube 69 feet on a side.

Reasons To Own Gold

If you ever have the opportunity to hold an ounce of gold in your hand, to feel it’s weight and observe its luster, you will understand some of it’s value which has been recognized throughout human history.

If not a full-on collapse, difficult times lie ahead for dollar-based economies. The world is clearly moving away from the dollar (although not being reported in the U.S. mainstream), and this WILL lead to increasing devaluation of the dollar and it’s purchasing power. Translation: Things will cost more in terms of dollars. Gold (and other assets) will retain their purchasing power, and may even spike in ‘value’ as world investors flock into it during a panic stage of crisis (supply and demand).

America has lost most of it’s power base of manufacturing to other countries, such as China and others. The real power of a nation (other than it’s ability to destroy things) is it’s ability to make things. A country (a people) who loses their practical skill sets, competence, and capabilities to manufacture and self-sustain – is destined to diminish it’s value on the world stage – and it’s corresponding currency.

America has floated it’s debt on the back of the petrodollar (other nations having been ‘forced’ to purchase petroleum products with dollars). Clearly, this is coming to an end (not being reported in the U.S. mainstream) as other nations have grouped together and are forming energy alliances outside the dollar. This WILL result in further devaluation of the dollar’s purchasing power as prices will rise as more dollars ‘come home’ from abroad.

The West doesn’t have the physical gold that they say they do. Again, this is not being reported in the U.S. mainstream, but clearly (when you research this) the West has lost much of it’s gold to the East due to central bank gold price manipulation – which has enabled massive physical gold buying – draining the gold vaults of the West. The U.S. cannot even deliver Germany’s gold back to them (saying it will take at least 7-years) – supposedly a fraction of what the U.S. purportedly has in their vaults (which they obviously do not have).

China (and others) is (are) amassing physical gold at an astounding rate. Have you ever heard the following statement — “He who has the gold makes the rules”? When faith is lost or diminished in the current fiat currency (paper money backed by essentially nothing), those who have the gold will make the new rules.

Gold has ALWAYS been considered real money throughout all of human history. Gold is transferable anywhere in the world as ‘money’ whereas fiat currencies not necessarily.

The United States is burgeoning with debt, and the world knows it. With the ongoing (ZIRP) zero interest rate policies of the federal reserve, nations are diminishing their holdings of U.S. debt (Treasuries). They are also lessening their ‘dollar’ transactions amongst each other and are agreeing to exchange their own currencies or other asset arrangements between themselves.

All paper currency throughout all of history has ALWAYS (100%) returned to it’s intrinsic value (the paper itself). There has been no exception. Gold is what it is and has survived the test of time as ‘money’.

When you posses physical gold, there is no counter-party risk. It’s yours, and nothing can change what it is.

Gold can be hidden, it can be stored, and it can be transferable into a new or different monetary system.

There is only so much gold that can be extracted from the earth. The only gold left to extract is the ‘difficult to get’ kind. There is such a thing as supply and demand, and while the current demand is very high while the fiat price is manipulated low – eventually something’s got to give…

Gold cannot be debased like fiat currencies are constantly debased.

If you understand how today’s currencies work, you know that they are debt based. Dollars come into existence through debt creation. There is inherent devaluation built in to our currency.

No, you can’t eat gold… In a SHTF collapse gold’s value becomes the core of wealth preservation, given it’s history. While survival assets themselves will be the currency through a collapse, gold (and silver) will be one of the accepted exchanges for goods and services, while also providing a storage of value into the next monetary system (whatever that may be).

How much gold (or silver) should you own? I don’t know… it’s up to you and your own monetary situation. Some say 10%, some say more. It’s a judgement call.

Now is a good time to purchase gold, given it’s current suppressed price – which is (as of the date of this article) very close to the break-even cost of mining it.

Rather than obscure or rare coins, I recommend purchasing well known 1-ounce coins of silver or gold such as the American Eagle, the American Buffalo, the Canadian Maple Leaf, the Australian Kangaroo, the South African Krugerrand, etc.

If you are wondering where to purchase gold (or silver), there are a number of reputable companies that facilitate the process. I’ve used several companies, two of which are as follows.