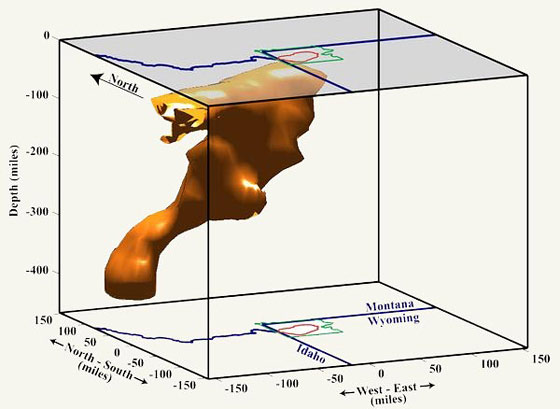 The image above illustrates the size of the Yellowstone super volcano magma chamber superimposed in 3D beneath the state outlines of Wyoming and Idaho. Notice the relative size compared with the green outline of Yellowstone National Park and the red outline of the caldera itself. It’s huge.

Volcanic ash would cover the devastated area to depths ranging from hundreds of feet within proximity, to as much as six inches – thousands of miles away

Anything within 500 miles of the eruption would be completely destroyed

Ash would circle the globe on upper-level winds blotting sunlight for months, followed by a dim and cold volcanic winter lasting for several years

Global temperature would drop, perhaps as much as 20 degrees F

75% of all plant species would die off

World agriculture would be devastated

Human survival and civilization as we know it would be threatened

A somewhat alarming statistic regarding Yellowstone is that it’s eruption cycle is a short as the 600,000+ year range and as long as 800,000 years. The last eruption was 640,000 years ago, and we are now within the time frame of possibility. Having said that, it is possible that we will not witness this eruption in our lifetime.

When considering the effects that such an event would have upon the world, it is nearly incomprehensible to create a survival plan.

When considering Yellowstone for example, those who live anywhere near it or downwind from it will have a terrible if not impossible chance of survival. Much of the United States will be covered with ash. Depths would range from 100 or more feet deep near Yellowstone, to 10’s of feet deep further out and even a minimum depth of 5 inches at the extremities of its reach across much of the country.

Preparedness for a super volcano eruption involves location location location. Far away from the immediate ash-fall effects and away from population density where troubles will surely arise in a collapsed aftermath. Several years of stored food. The ability to grow your own food – which may itself be difficult due to the sun being blotted and dim – especially the first year.

Fortunately, the probabilities of are statistically low.
However we just don’t know when…