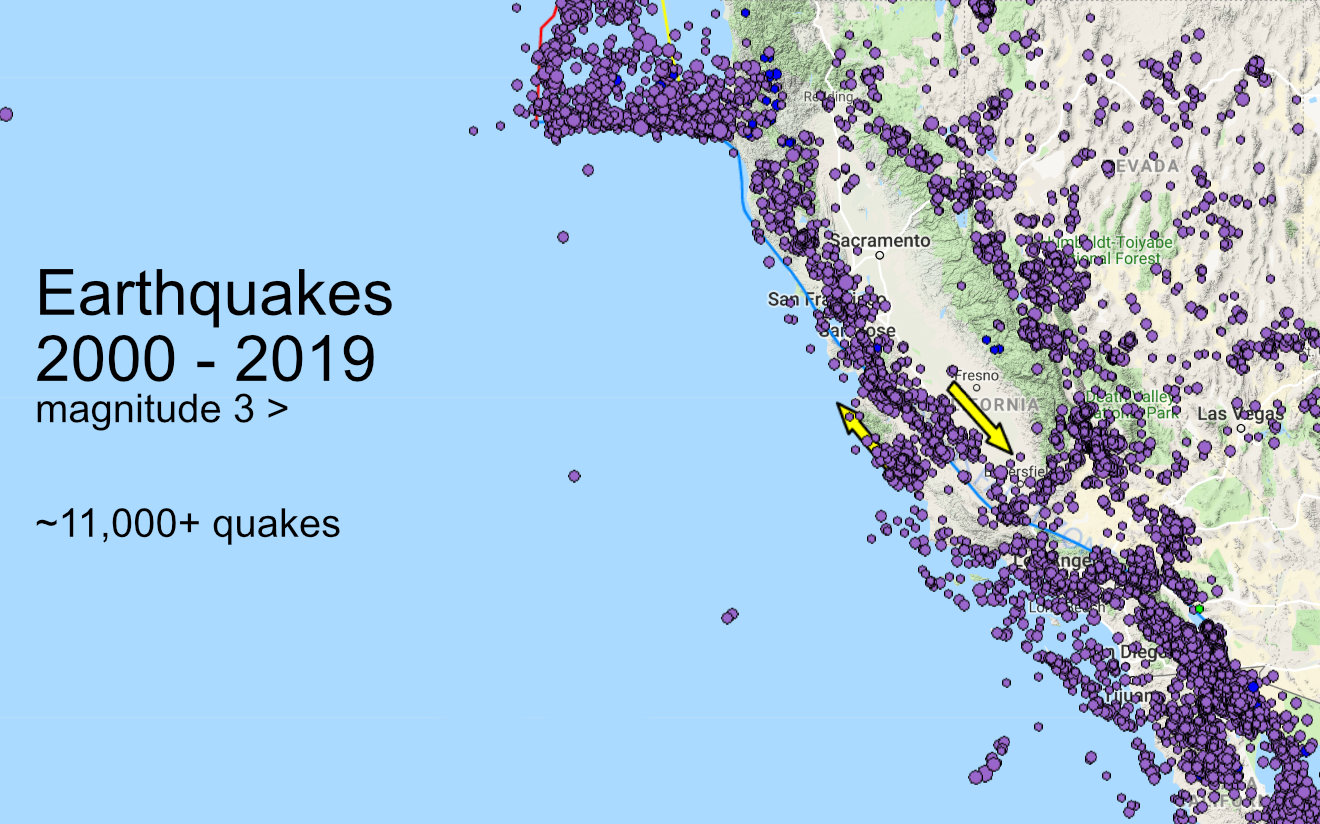 Earthquake Preparedness Should Be Part of West Coast Life | But Is It?

Unless you’ve been living under a rock, you probably are aware of the recent large magnitude earthquakes that have rumbled the southwest of California.

The epicenter of those recent quakes (and quake swarm) is just over a hundred miles from the Los Angeles metro region. Fortunately out in the desert.

Though the recent earthquakes have not been on the San Andreas Fault, the shifting earth is all related. One never knows when one leads to another…

I dug up some data on the number of earthquakes magnitude 3 or greater over the last 20 years (for the California region within the map above).

Other than the year 2010 when the total quakes on the illustrated map (above) were ~2000 (due to a Baja earthquake swarm), this year 2019 (as of July) there have been nearly 900 earthquakes (within the region shown on the map above). The average has been ~460/yr there.

So, something is happening. People there should take serious notice.

The Los Angeles-Long Beach, CA Combined Statistical Area(CSA), more commonly known as the Greater Los Angeles Area is actually a megapolitan area consisting of three metropolitan areas, with an estimated population of 18,788,800 in 2017.

The San Francisco Bay Area has a population of over 7 million people in nine counties and 101 cities.

How many of the combined 25 million people, just in those two regions, are prepared for The Big One?

Probably not too many at all.

The Pacific Northwest and the Cascadia Subduction Zone

Great Subduction Zone earthquakes are the largest earthquakes in the world, and are the only source zones that can produce earthquakes greater than M8.5.

The Cascadia Subduction Zone has produced magnitude 9.0 or greater earthquakes in the past, and undoubtedly will in the future.

The population of the Pacific Northwest region is about 15 million.

Everyone knows that the Cascadia Subduction Zone is going to unleash a mega quake one day. It will likely result in a massive tsunami and horrible damage to the city regions along the coast there.

I wonder how many of the 15 million people there are prepared for that?

Probably not too many.

When there’s a big enough earthquake to rattle the nerves so to speak, some people do ‘wake up’ and prepare a little.

A recent article in the Los Angeles Times headlines “Even after huge earthquakes, much of Southern California still unprepared for The Big One”

They report on how a local surplus supply store was cleaned out in one day due to the Ridgecrest quake.

The same scenario played out at stores across Southern California all weekend following a magnitude 6.4 earthquake on the morning of July Fourth and a larger temblor — a magnitude 7.1 — that struck a day later near Ridgecrest, Calif., a Mojave Desert town about 125 miles northeast of Los Angeles.

“People have short memories — even about earthquakes,” It’s not just emergency supplies that people are lacking. According to the Department of Insurance, only about 21% of homeowners in L.A. and Orange counties have coverage for quake damage.

How Do You Prepare For A Big Earthquake?

I’ve written about this before. Although it has been awhile, the preparedness is the same.

Water. Food. Emergency shelter capability (your home may not be safe). There are things that should be done preemptively for safety.

You might get started by browsing these articles and then searching this site for more preparedness advice: