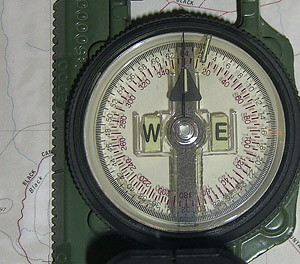 The recent changes at Tampa Bay International Airport regarding magnetic pole re-calibration and runway closure, chart alignment and runway number paint, could become a normal procedure for airports across the land. As an example nearby Peter O’Knight Airport is also scheduling similar changes at their facility.

At the current rate, about every 5 years a compass needle will be off by 1 degree.

While satellite GPS navigation has become a predominantly used method, navigation by way of compass heading is still essential in locations where line-of-sight to orbiting satellites is not possible.

As the Earth’s magnetic field continues to move, at some point the changes will effect all sorts of established systems such as charts, directions, documentation, software, and yes – more airports…

It is amazing to realize that the layer of earth and rock beneath our feet, the ‘crust’, is only just 25 miles thick, and is just a tiny slice of the enormous hot layers beneath. The Earth’s continents float and jostle around on top of a layer of hot molten rock, the subsistence of road tar.

After putting the scale of the Earth’s layers in perspective, and realizing that most of the mass under our feet is extremely hot, molten, liquefied, and on the move, it is then easier to understand the changes we sometimes witness and our vulnerability to what is underneath us.

One wonders that if the reason for the increased speed of the magnetic north pole could be due to a change in the speed of the liquid ‘outer core’, then could this be leading towards more geophysical events on the surface? After all, we’re just floating and bumping around on top of a red hot molten mix. If the mixer speeds up…

I put together the following ‘to scale’ animated image of the Earth and it’s core layers. Again, look at the blue crust sitting on top, so small in comparison.