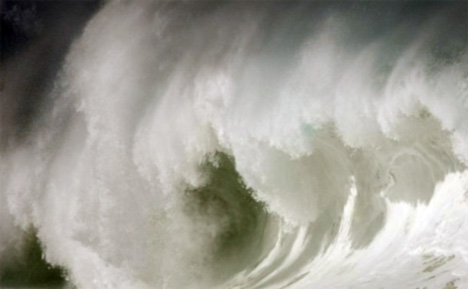 The risk of a Tsunami is a very real and present danger to nearly anyone living within miles of an ocean shoreline. An even more frightening risk, a Mega-Tsunami, exists in many parts of the world where unfortunately much of the world’s population lives (near the coast).

What is a Mega-Tsunami? It is an informal term to describe a tsunami that has initial wave heights that are much larger than normal tsunamis. They have, and will in the future, produce waves of hundreds up to thousands of feet high. As science fiction as this may sound, it has happened before and no doubt will happen again.

Here is some history of past Mega-Tsunamis.

The asteroid which created the crater in Yucatan approximately 65 million years ago would have generated mega-tsunamis as high as 10,000 feet (1.9 mi).

A series of mega-tsunamis were generated by the bolide impact that created the Chesapeake Bay impact crater, about 35.5 million years ago. The mega-tsunami is believed to have over-topped the Blue Ridge Mountains (1,000 plus feet).

Approximately 8,000 years ago, a massive volcanic landslide off of Mt. Etna, Sicily caused a mega-tsunami thought to have been more than 300 feet tall which devastated the eastern Mediterranean coastline on three continents.

There have been many more historical mega-tsunamis… just search online if you’re interested to discover more history.

In 1792, Mount Unzen in Japan erupted, causing part of the volcano to collapse into the sea. The landslide caused a mega-tsunami that reached 330 feet high.

In 1958, a giant landslide at the head of Lituya Bay in Alaska, caused by an earthquake, generated a wave with an initial height of 1,719 feet. This is the highest wave ever recorded, and surged over the headland opposite, stripping trees and soil down to bedrock, and surged along the fjord which forms Lituya Bay.

Great landslide ‘debris aprons’ have been found around the Hawaiian Islands. The Canary Islands have at least 14 such debris aprons associated with the archipelago.

Many believe that a massive landslide on a volcanic ocean island is the most likely future cause of a mega-tsunami. The size and power of a wave generated by such means could produce devastating effects, travelling across oceans and inundating up to tens of miles inland from the coast.

Many also consider that a mega-tsunami could be generated during a future eruption on the volcanic island of La Palma, in the Canary Islands, Spain.

In 1949, a volcanic eruption there later revealed that a fissure about 1.6 miles long had opened on the eastern side of the summit. As a result, the western half of the volcano had slipped more than 6 feet downwards and 3 feet westwards towards the Atlantic Ocean.

Scientists believe the western flank will give way completely during some future eruption on the summit of the volcano, sending an astounding 120 cubic miles and 1.5 trillion tons of landmass sliding catastrophically into the ocean, generating a mega-tsunami of the likes never before seen.

If it were to catastrophically slide into the ocean, it could generate a wave with an initial height of about 3,300 feet at the island, and a likely height of around 160 feet at the Caribbean and the Eastern North American seaboard when it runs ashore eight hours later.

The wave generated will be almost inconceivably destructive, far bigger than anything ever witnessed in modern times. It will surge across the entire Atlantic in a matter of hours, engulfing the whole US east coast, sweeping away everything in its path up to 15 miles inland. Boston would be hit first, followed by New York, then Baltimore, Washington D.C. all the way down the coast to Miami and the Caribbean to South America as well as other cities along the Atlantic coast in Europe and Africa.

So now that you know about some of the history and present risk of a mega-tsunami, what can you do with this information?

Although the present risk may appear low, if you are considering a move to the coast, perhaps you’ll think twice. If you do live near a coast, and if you do hear of, or feel a major earthquake (which could potentially cause a tsunami), it may be prudent to beat the crowd to higher ground. If your hear breaking news of something as catastrophic as the island of La Palma erupting or sliding into the sea, you will have about 8 hours on the U.S. east coast to get out. Beat the crowd. They probably won’t even know about the risk to begin with.

(This is all yet another reason not to live in the big city, particularly those along the coast)