The map colors represent the direction of magnetism of the crustal surface rock (0 – 30 miles deep) as compared to the direction of magnetism of the earth’s core field deep below. The largest portion of the Earth’s magnetic field is generated in the Earth’s core, while magnetized rocks in the crust and upper mantle also make a significant contribution.

This map tells it all.

The way it works is…
New crust forms about 1 inch per year in many places, and during this process and as magnetic minerals cool below 1,100 degrees F, they develop a magnetic field and direction the same as the the strong core field beneath. This is ‘pretty cool’ because we can then ‘see’ the various fields and their magnetic ‘directions’ by way of data-mapping the magnetic fields of the surface crust and upper mantle.

Yellow, white and light-blue indicate areas in which the surface field is either very weak, or is in the same direction as the (stronger) core field. 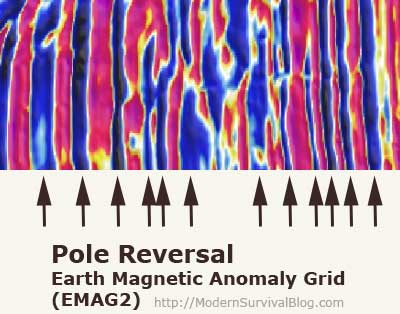 What to look for…
On the ocean floor ridges you can clearly see stripes of uniformly magnetized crust on each side of a ridge. Every few hundred thousand years the core field reverses direction, and the next set of stripes therefore acquires the opposite direction of magnetization. This is clearly visible in EMAG2 as striped patterns which are symmetric about the ridges and appear as opposing colors of red-purple to blue-black.

The cataclysmic pole shift hypothesis suggests that there have been geologically rapid shifts in the relative positions of the modern-day geographic locations of the poles and the axis of rotation of the Earth, creating calamities such as floods and tectonic events. Between approximately 790 and 810 million years ago, when the supercontinent Rodinia existed, two geologically-rapid phases of true polar wander may have occurred. In each of these, the Earth rotated ~55°

Are we overdue for a magnetic pole shift? Many say yes.

Do we know how quickly the pole shift will occur? No we do not. Many believe it is a very slow process, while others believe it to be much quicker.

Do we know the consequences of a magnetic pole shift? There is (are) the obvious issues with navigation methods that may still use magnetic compass. Many believe that earth stresses will occur resulting in dramatic earthquake and volcanic activity and some believe that during a magnetic shift that the surface of the earth will be highly vulnerable to solar radiation which is typically kept in check from the earth’s magnetic field.