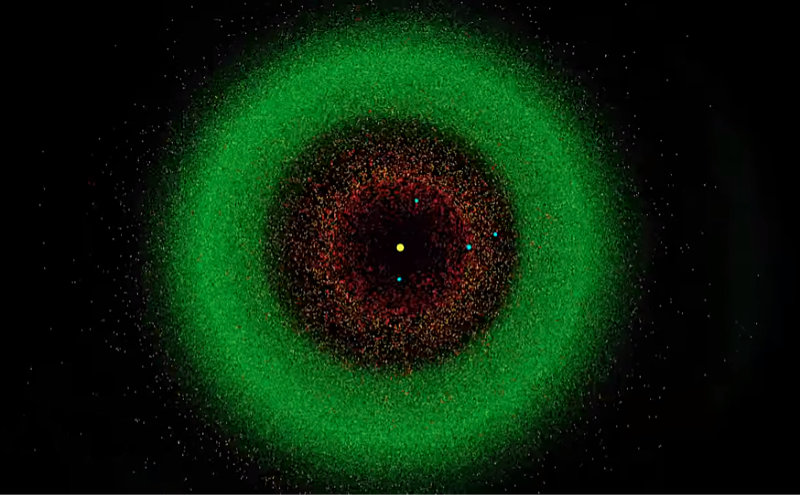 An asteroid streaked though the skies over northern Vermont a few days ago March 7, 2021. Not too terribly far my own AO here in northern New Hampshire. It was moving so fast and creating so much force that it rattled buildings on the ground.

Many reported hearing a “rumble” or “sonic boom” at the time the fireball was shooting through the sky. Some even said their houses shook during the incident.

The likely asteroid fragment traveled at 42,000 miles per hour. It began to break up when the difference in pressure created by the vacuum behind the speeding object “exceeded its structural strength,” NASA said, causing a sound wave that sensitive seismometers detected in the area.

NASA calculated the object’s size as 10 pounds and six inches in diameter.

Anyway, it reminded me of an article I posted years ago about the Asteroid Belt. I had found an incredible video illustrating the number of newly discovered asteroids over a timeline.

Having checked it these years later I see that the producer (Scott Manley) has updated a new asteroid discoveries video. He increased the timeline with more data. And he increased the video resolution choices all the way up to 8K!

The following asteroid belt visualization shows just how surrounded we are on planet Earth. We are in the middle of an asteroid shooting gallery…

Most asteroids come from a region in space between the planets Mars and Jupiter called the asteroid belt. It’s a region loaded with irregular shaped objects. They range in size from dust particles all the way up to a mile or more across.

Portions of the asteroid belt are very dense with objects. Frequent collisions take place. These collisions change the orbital nature of the objects themselves (like a ping-pong gallery). Some of these result in eventual collisions with the Earth’s atmosphere as meteors or ‘shooting stars’.

What are the chances of Earth being hit by an Asteroid?

A sobering statement from the Armagh Observatory, one of the UK and Ireland’s leading scientific research establishments, reads…

“Even conservative estimates would suggest that for every asteroid on a dangerous Earth-Approaching orbit there are hundreds more which have yet to be discovered. There are over 300 known objects on Earth-crossing orbits, the majority of which are potentially capable of causing death and destruction on a scale unheard of in human history.“

“It is estimated that there are perhaps 100,000 to 1,000,000 undiscovered asteroids on similar Earth crossing orbits.“

The following video shows the discovery timeline of all known asteroids beginning in 1970 through 2015. As the video progresses, the newly discovered asteroids are briefly highlighted. As the years progress, more are found each year… Watch as the asteroids cross Earth’s orbit (the third ring out from the center) and notice the circling swarm by the end.

You may gain a new understanding of the asteroid collision risk that the Earth faces in the somewhat chaotic environment of the solar system and its asteroid belt.

Currently we have observed over half a million asteroids – objects. The discovery rates show no sign that we’re running out of undiscovered objects.

Scientific estimates suggest that there are about a billion asteroids larger than 100 meters (about the size of a football field).

Orbital elements were taken from the ‘astorb.dat’ data created by Ted Bowell at lowell.edu.

The latest version of this famous asteroid belt discoveries video:

An asteroid the size of a house would wipe out a city region like a 20 kiloton bomb.

An asteroid half a football field wide wiped out 1,200 square miles of Siberia in 1908.

One that’s a mile wide would likely end us all…