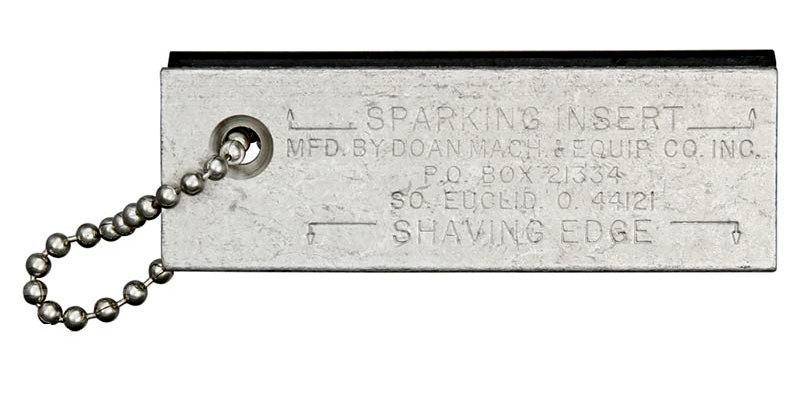 This magnesium fire starter is the real deal.
One that’s made by Doan, made in the USA:

DOAN magnesium fire starter, military issue Made in the USA

UPDATE: Since this original post (below), the Doan company no longer makes this fire starter.

The Tag-Z Magnesium Fire Starter is an exact replica of the Doan Government Military Fire Starter, adopted by the US Armed Forces for use in their survival kits.

“The Doan company went out of business and is not making these anymore, and we wanted to continue on, so we had these Doan replica fire starters manufactured especially for us using the exact specs from the originals.”

This is one life-saving tool no outdoorsman should be without. Its size makes it convenient for pocket or tackle box. You can count on it to work, wet or dry, even with damp kindling.

By scraping the “shaving edges” with the blade, you will accumulate a pile of magnesium shavings. Simply scrape the “sparking insert” to ignite the shavings to temperatures of 5400°F. That’s hot enough to light even the most stubborn campfire.

STEP 1 Support edge of tool on ground. Scrape narrow side of tool marked “SHAVING EDGE” with knife blade held perpendicular to tool. Amass small pile of magnesium about the size of a quarter next to tinder. (paper. leaves, small twigs, bark, etc.)

STEP 2 Support edge of tool on ground within 1″ of magnesium shavings at approximately 45° angle. Scrape entire length of side marked “SPARKING INSERT” rapidly with knife held perpendicular to SPARKING INSERT. This action will cause generate sparks, causing the magnesium shavings to ignite, providing a white hot flame. If you don’t want to dull your knife, a small hacksaw blade works great!

A Doan Magnesium Fire Starter In Your Pocket

A quick short story inspired the post a few years ago:

I was talking with a friend the other day who said something that I thought was very much worth mentioning here on the blog.

We were out in the White Mountain National Forest. Doing more work on our snowmobile trail system getting ready for winter.

Here in the Fall we tend to get windstorms that inevitably take down trees, which we in turn must clear. Several of us will take our ATV’s loaded up with gear, chainsaws, and other complimentary tools to get the job done.

During a break while on our last outing I was showing him my survival kit. I keep it in the compartment under the front hood of my Polaris.

I had joked about how I was using up my drinking water that day faster than I thought (lots of tree work and sweat!). And I mentioned how I wish I had taken along more water (although it turned out I had enough).

The conversation turned towards having a water filter. I opened the compartment and showed him the LifeStraw which I keep there among my other gear. We then started comparing what we each had with us on our ATV’s for ‘kit’. (I had the most toilet paper – a squished roll in a ziploc bag.) Actually I had the most survival related ‘stuff’ (because I purposely had that in mind when I put it together).

Now  with that said, this person has his own ATV. It’s loaded down with enough stuff to withstand a nuclear disaster if you ask me. I feel pretty good riding with him knowing that he is well equipped. You really need to be when out in the middle of ‘nowhere’ in the forest without cell phone reception!

Anyway, during this break the third man on the crew was replacing the chain on his Stihl. We would constantly kid him about it because that chain was seemingly dull beyond what any more filing could possibly fix. Since it was a Stihl chainsaw, my friend asked him about magnesium, because apparently he had heard that Stihl was utilizing magnesium die-casting.

This led to a joke that he better not catch a spark on that thing… It might flare up in flames and you’ll never be able to put it out! This then led to the mention of the magnesium fire starter – which I keep in my kit (an original Doan magnesium fire starter) along with other fire making means.

Well here it is. My friend says “I always keep a fire starter in my pocket”. (which could be any number of things – a lighter, magnesium fire starter, a FireSteel, etc..).

I said, “Really?” He said, “Yes, especially when I’m riding (snowmobiling, 4-wheeling, ). Because you never know if you get thrown off, or some accident where you can’t move (broken bone, etc..) and can’t get back to your kit, at least you can start a fire.”

I thought what a very good tip!

To have on your person a way to make a fire, especially during activities while alone which may risk getting into a jam…

Of course the other guy on the crew joked, “I don’t need that!” “I’ll just rub two sticks together!”

Another excellent fire starter, made in New Hampshire:
FireSteel