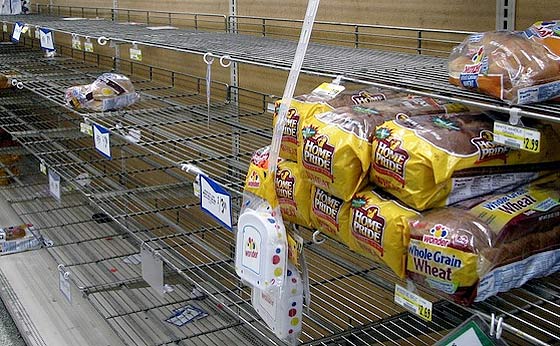 I’ve posted this type of list several times before, and it’s good food-for-thought. It’s been awhile so lets do it again… If the SHTF in a very big way, what might be the first things/items that will disappear, given the general public at large? I know it depends on what the SHTF event is, etc., but lets just go with it and imagine it’s real bad.

While ultimately you might say that ‘everything’ might disappear eventually, lets instead think about the ‘first’ things, the items that others might consider to be needed the most – and therefore the first things to disappear.

In no particular order, here’s a list of items that will disappear first, after SHTF – off the top of my head:

It’s interesting to consider what most of the general public would probably grab first. Although I have not defined the SHTF event or extent, one thing for sure is this… The public will (at first) assume that things will get back to normal – because that’s the way it has always been. Others will ‘fix’ it.

It’s also interesting to consider what it is that ‘preppers’ might run out and ‘top off’ for their existing supplies. Though already well supplied, some may be tempted (if it’s safe at first in your region) to pick up some last minute ‘xyz’…

What are some of the items that the general public might disappear first? How might they prioritize things, given their normalcy bias? Also, would you go out and top off anything right after SHTF if you could?