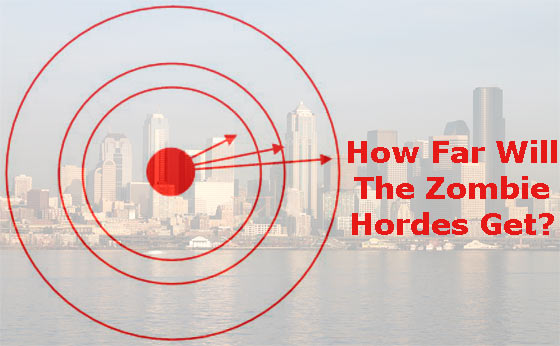 While determining a location for your survival retreat, bug-out-location, or simply a safer place to live, you should consider its distance from a dense population area or city.

In the event of a SHTF disaster scenario there may be some number of zombie hordes who will attempt to escape their city when the infrastructure has collapsed, and food, water, and fuel becomes scarce and hard to find.

How Far Will The Roving Zombie Hordes Get?

In all probability, by the time the majority of the sheeple realize that they’re up $hit’s creek without a paddle, it will already be too late to realistically and safely get out. That’s assuming that they had somewhere to go… Nearly everyone has no place to go, so they won’t. At least that’s until they get desperate for water and food, at which time many will already be in a weakened physical and mental state which will greatly hinder their ability to be effective about it.

For those who immediately bug out, or for others who manage to overcome other obstacles, most will use their vehicle. Let’s figure out how far they might get…

The average fuel economy (miles per gallon) of a vehicle varies of course, depending on factors including the vehicle itself, it’s engine, whether we’re talking city or highway mileage, etc. In the U.S., the government’s current fuel economy standards for new passenger vehicles is 27.5 mpg and 23.5 mpg for light trucks (GVWR less than 8,500 lbs).

However not everyone has a newer car with that fuel economy. A number of years ago a study was performed that determined 60 percent of vehicles in the U.S. were older than seven years. 10 years ago the fuel economy standards were 27.5 and 20.7 mpg.

For the sake of determining the average fuel economy of all vehicles on the road today, factoring in highway and city mileage, my instinct tells me it may be somewhere near 20 miles per gallon, maybe slightly less. Lets use 20 mpg for this example.

The average maximum range of all vehicles on the road at any given moment based on a full tank of gas is probably near 360 miles (20 mpg x 18 gallons).

The thing is, not everyone has a full tank of gas at all times, and in fact, most do not. Many people don’t add fuel until their fuel tank is fairly low. My suspicion is that most people on average have half a tank or less of fuel in their vehicle at any one time. This changes the average range to be closer to 150 miles.

When the hordes evacuate the cities, their range on average could potentially be 150 miles.

However there will be obstacles for a SHTF zombie evacuation, and many won’t even get close to 150 miles, mostly because it will be too late. These obstacles will include…

They have nowhere to go. No plan. No idea where to procure what they need to survive. Therefore many or most will stay put and suffer the consequences.

Major roads may become clogged with vehicles. Some will run out of fuel and make it even worse for the others.

Once the collapse and SHTF is well under way, gangs and other ‘bad’ groups will attempt to set up road blocks to ambush and loot the zombies of their supplies.

If you must bug-out…

Leave early! …before the others realize the trouble they’re in.

Pre-plan your escape route, and ideally have several optional routes pre-planned. Know your destination ahead of time!

Keep your fuel tank full. Make it a habit.

Have extra fuel in gas cans which you can put in the trunk to extend your range for the trip. I would only add these upon embarking on the trip – not for normal day-to-day driving due to safety issues. Use fuel additives to extend its shelf life.

Consider traveling by way of secondary (or lesser) roads, away from the main arteries and routes most traveled.

Have maps in your vehicle, and a compass.

Keep a 72-hour kit in your vehicle with enough food, water and supplies to manage for 3 days. Adjust accordingly to suit your needs.

Here is a map that I had put together awhile ago of the northwest USA which indicates the areas (circles) surrounding cities with a population of more than 100,000 people.

Keep in mind that this does not take into account highway locations (or lack thereof) or geographical impediments of travel, which would change the probabilities and direction of exodus of zombie hordes.