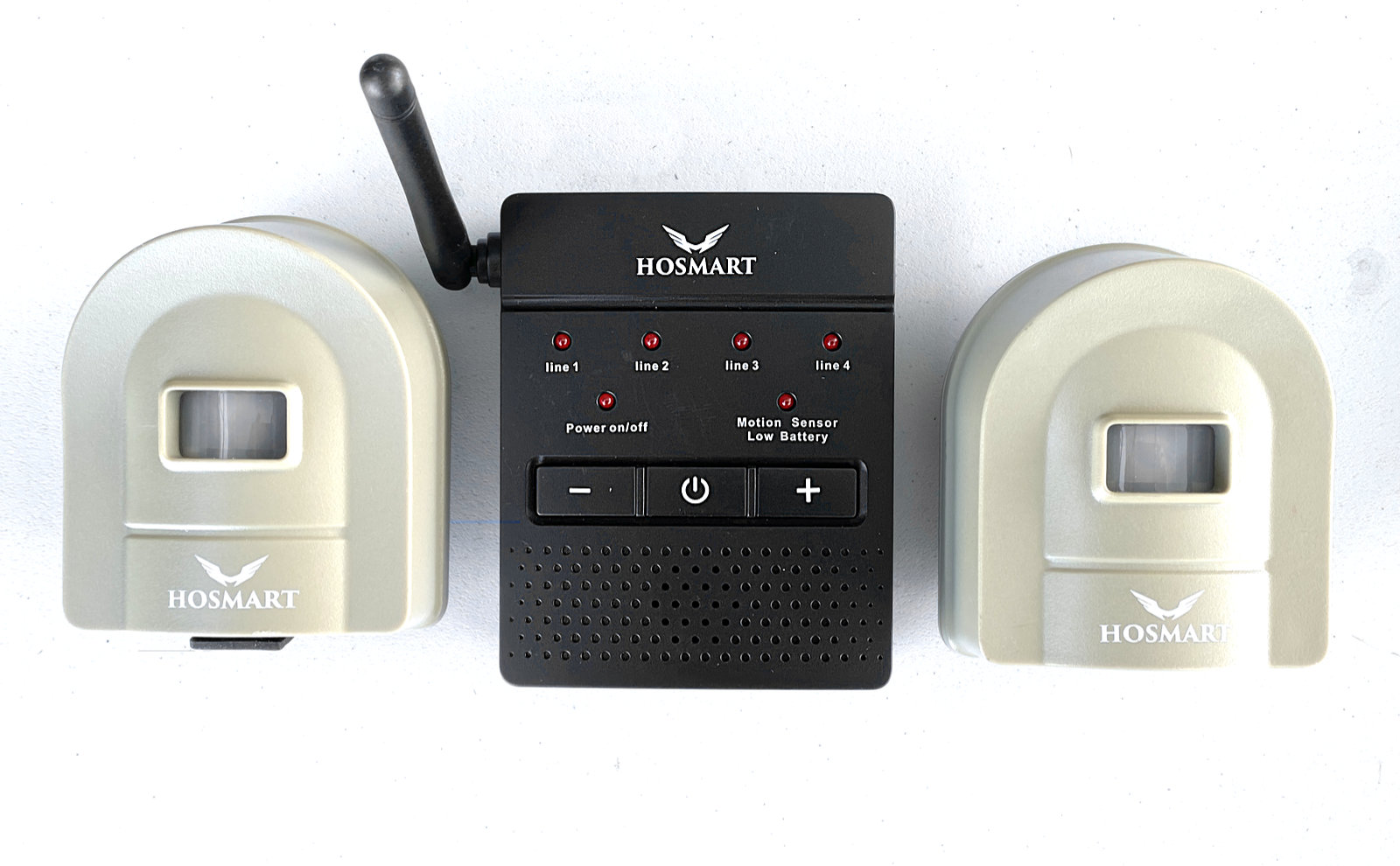 I have this particular wireless driveway alarm system pictured above (infrared sensor transmitters and base receiver). I use it a bit differently for security than you might expect. I’ll explain in a minute…

Actually, I own several various driveway alarm systems. Two of them have magnetic sensors, while this particular one has infrared sensors.

I can’t utilize infrared sensors for my driveway alarm because my driveway is actually my private road. Being well off into a mountainous forest region, my road is a well traveled route during the day (and especially at night) by deer, bear, fox, coyotes, bobcat, turkeys, rabbits, the occasional moose, and other 4-legged creatures.

My wireless driveway alarm would be sounding quite a lot during the day and night. Which is why I installed magnetic sensor alarms for the road (article linked at the end).

So, why am I saying this? Don’t get me wrong. I’m not saying the infrared sensor type of wireless driveway alarm is no good. In fact, it’s perfectly fine for most people! I’m writing about it today because I’ve recently used it yet again for a unique purpose. And I was (again) quite impressed with it’s range performance!

So long as you don’t have the probability of animals setting it off all the time, this wireless driveway alarm is great. It can be used for other purposes too. Maybe you have a fenced-in backyard, and a gate which opens from the front to the backyard. A sensor on the fence behind the gate would alert whenever someone opens the gate going down the side of your house (for example).

Anyway, what do I use it for? Security for my Truck and my 5th-wheel camper.

Simply place a sensor inside the truck. Maybe on the console, or the dash. If someone breaks in, the infrared sensor will transmit to the base unit, sounding the alarm (at the base unit). So you’ll know something’s going on…

Similarly, when not using the camper or while traveling with it (but staying in a hotel on a given night), I place a sensor on the counter facing the door. Base unit in the hotel.

Like I said earlier, I’ve used this system for several years (for my Truck and Camper). Recently, we traveled again. I was so impressed this time, that I just had to mention it. Here’s what I was impressed about…

The first two nights we stayed in a hotel because the weather was too cold up north this time of year to sleep in our 5th-wheel. Besides, most campgrounds are closed this time of year in the north (pipes will freeze, etc..).

When we’re settled in, I place an infrared sensor in the truck, and the other one in the camper. Mrs.J is in the room with the base unit. I test each sensor with motion while on the phone with Mrs.J, confirming that it’s working.

The second night of our trip. That’s what impressed me. Our room was literally the opposite end (length-wise) from where I parked the 5th-wheel for the night. It wasn’t just the distance, but it was the amount of concrete and walls that the signal had to transmit through to reach the other end. Wow. And it worked perfectly.

I would say the distance in this example was about 400 feet. But like I said, the signal went through all “the bones” of the building too. That surprised me.

Okay, so what’s the wireless driveway alarm that I speak of?

Although it’s now branded under a few names (copied), the original (as far as I know) is/was the HOSMART.

I have not checked the distance. Hosmart claims up to 1/2 mile. I’m pretty confident (based on my uses) that it’s probably fairly accurate under ideal terrain conditions. Trees, terrain, hills, buildings, will all affect distance.

They sell it in a wide variety of configurations. They even have solar-powered sensors now. Here’s the one I have:

I have two infrared sensors. Each one makes a different chime on the base unit. So I number them so I know what’s what… (if that matters). The base unit can accommodate up to four sensors.

Here’s the charger and cable. It charges the individual infrared sensor assembly’s which have an internal 18650 Lithium ion battery. Fortunately the sensor charge lasts a very long time. It has lasted up to a year for me. Just bear in mind that you will have to recharge these sensors once in awhile. So mount them accordingly.

They also make solar-charged sensors so you don’t need to manually recharge them.
(example)

The base unit will operate from the AC/DC charge unit, or via batteries. Here’s a trick that I do while traveling with it. I pull out one battery so it doesn’t accidently turn on via incidental button-press.

Tip: If operating by batteries alone, extend battery life by shutting off the base unit during times when it’s not important. For example, maybe you only turn it on at night… Base unit batteries will only last about 2 to 4 weeks of full “on” time, depending.

Anyway, one aspect to preparedness is mitigating security risks. I thought I would share one unique way I’m using this kind of driveway alarm.