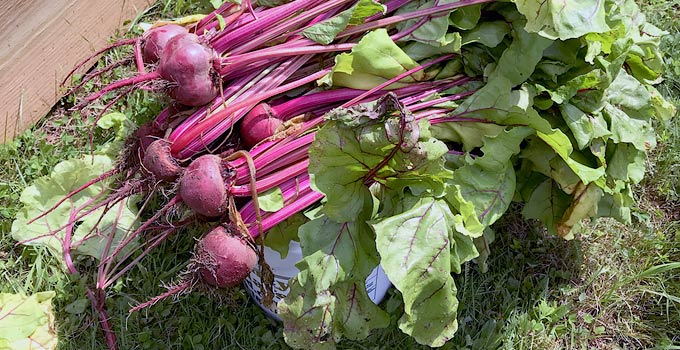 Some time ago I researched and reported on garden vegetable calories. I wanted to know which vegetables might be better to grow for the sake of survival & preparedness (mainly for calories). Among several choices, I noticed that beets are also a pretty good choice! They grow fast, have pretty decent calories, and you can eat the entire thing… the beetroot, stalk, and tops – all good nutrition.

I knew that most vegetables are pretty low in calories and may not be very practical to grow compared with others if one were to consider SHTF survival (calories).

While beets are not as high in calories as potatoes or corn, beets in your garden make for a pretty good ‘survival food’.

1. Beets are very easy to grow.
2. Beets grow fast!
3. You can eat their leaves and stems!
4. Fairly high in calories.
5. Will store will during the winter.
6. Beets Nutrition: They’re apparently healthy for you!

During a previous season I grew a particular variety of beets in part of a raised garden bed as an experiment. It was wildly successful!

I could have harvested sooner but I wanted to wait until the exposed ‘shoulders’ of the beets were big (about 2″ diameter – some were bigger and a few were smaller).

They were maintenance free. Their large leaves shaded any potential weeds from growing.

UPDATE 2022: This year I’m growing ‘Detroit Dark Red’ variety that I purchased from Baker Creek Heirloom Seeds (no affiliation). This is a popular variety and I can’t wait to taste them…

The large leaves (beet tops) from a beet are great for salads. You could also snip off a leaf or two during their growth period.

The stems are also edible. I tried cutting them into pieces and fried them in a pan with oil. Tasted fine.

I am trying an experiment. I put a few dozen of them in a container with sand (slightly damp sand). While you could ‘can’ them, I want to see how long they will last without any external energy required.

Leave the root intact and simply cut the leaf stems leaving about 2 inches. Layer them in sand. I place the cover onto the container to keep the dampness intact.

Online research indicates they should last 2 to 4 months. We’ll see… I’ve stored potatoes which have lasted about 6 months (simply layered within boxes in my cool temp. shop building).

UPDATE: The sand method did not work well for me. Not sure why. They ended up mold. This year I will be using the canning method.

Online research reveals apparent health benefits of beets. These include:

Apparently beet leaves are the highest in potassium of any vegetable!

In one cup of beets (calorieking.com),

BEETS FOR YOUR SURVIVAL GARDEN

You probably won’t be eating much meat during ‘hard times’ so it will be important to seriously consider garden vegetable calories and experiment NOW rather than LATER.

Discover what grows well in your area, your soil, your environment. These will be what you should concentrate on. Experiment every year with something new in addition to what you know works.

I have an ongoing experiment with growing potatoes in a barrel (two barrels actually). They look to be doing great. When I harvest them I will let you know (and will write an article)!

UPDATE 2022: That experiment didn’t go nearly as well as I had hoped. I did get potatoes, but not as many as I thought that I would. I have some other potato experiments going this year…

Anyway, thought I would mention Beets…