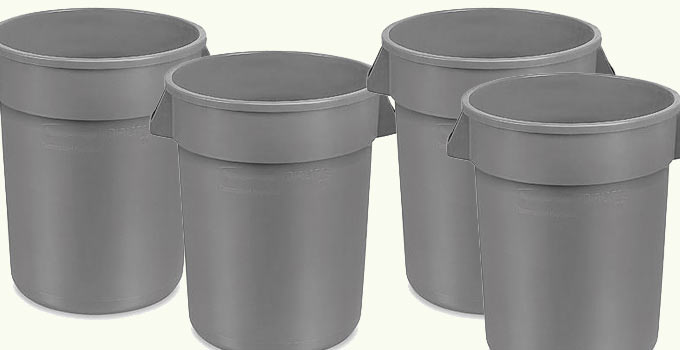 This year I’m going to try another way to grow potatoes. I’m going to plant my seed potatoes in a barrel. Several barrels.

The past few years I’ve grown them the traditional way, in garden rows. For a homesteader, growing potatoes that way is a bit tedious to say the least.

Why? Because you have to keep on hilling the long rows – covering them with more dirt as they grow. It involves a lot of shoveling and the continuing need for lots more soil.

I’ve known about the concept of growing potatoes in a barrel for quite awhile. I’ve just never done it. Well now I’m going to do it…

Evidently the process is very easy and the potential yield can be quite remarkable!

I’ve heard about potato yields of 50 to 100 pounds from one 55 gallon barrel!

How To Grow Potatoes In A Barrel

The way that potatoes grow in a barrel is no different from how they grow in a traditional garden row. You plant seed potatoes, wait until the foliage grows up about 6 inches and then cover up with more soil. Repeat until the end of season. Harvest.

The difference between growing potatoes in a barrel versus a garden row is apparent efficiency and concentrated yield.

For maximum yield, use a taller barrel (e.g. typical 55 gallon size barrel). It’s tall enough to cover the growing potatoes many times which will yield more potatoes in the end.

Note: Potatoes grow from new tubers that form each time you cover up the green foliage. Each time that you mound them (cover them) will eventually grow out more tubers. More potatoes in a barrel!

Use whatever type barrel or container that suits you. I’m probably going to use ordinary 55 gallon plastic barrels – I have a few BPA-free that I might re-purpose. I’m going to have a look at Home Depot to see what they have in their garden department for large/tall containers.

If you’re picking up previously used barrels, it’s best to know what they were used for. Obviously do not use if they had any sort of chemicals in them. Additionally, clean them out with a bleach-water mixture to kill any organic contamination.

Tip: Best not to use a black barrel. It will get too hot in the summer sun. Potatoes actually like it fairly cool.

Drainage! Drill plenty of holes on the bottom and along the lower portion of the sides for very good drainage. I’ve seen some that have drilled holes all the way up the sides too. About every 6 inches at least a 1/2″ hole.

If the soil doesn’t drain well, the roots will rot.

That said, the soil will need to remain moist at all times. But not wet.

Tip: Set the barrel on something (e.g. up on cinder blocks that support the edges). This will keep the barrel off the ground for good unimpeded drainage out the bottom holes.

Fill the bottom of the barrel container with 6 inches of soil. Ideally use a high drainage soil. You might consider adding a bit of straw and organic compost material.

Plant the seed potatoes on top of the first layer of soil, enough to fill the space with approximate 6 inch spacing. The side with the most eye / shoots: face up.

Then cover with about 6 inches of soil. Water and keep soil moist at all times.

Tip: Preserve your potatoes from last harvest but leave some for next year’s seed potatoes.

More: How To Preserve Potatoes

While grocery store potatoes will grow (I’ve done it), they won’t produce as well because they’re purposed to produce fewer eyes and less shoot growth (which shoppers don’t like to see in the grocery store).

Seed potatoes are not inhibited and will sprout well.

Small ‘seed potatoes’ can be planted whole as long as they have at least two or three eyes on them. Larger potatoes are generally cut into sections containing that many eyes apiece.

It’s okay to plant whole potatoes. It’s also okay to immediately plant cut sections of seed potatoes. If you cut them, you might consider allowing a few days drying time for the cut sides to seal a protective barrier. This will guard against organisms that could cause the potato to rot.

Add Another Layer Of Soil After 6″ New Growth

When the new growth foliage reaches about 6 inches tall, cover them with new soil leaving just an inch or two exposed.

Prior to covering them with more soil, you might consider adding a few more seed potatoes to increase yield even further. Although not necessary, I’m going to try it this way.

Water and keep soil moist at all times.

Repeat the process until you reach the top of the barrel / container. Then simply let it grow until the foliage yellows and dies off, or until first frost does it for you.

Tip the barrel over for harvest

When it’s time for harvest, tip the barrel over, dump it all out, and harvest your potatoes!

You might consider putting out a tarp for the dirt when you dump it all out.

It sounds pretty easy. I can’t wait to get started.

Potatoes are one of the highest calorie vegetables that you can grow in your garden. That makes it ideal for the sake of preparedness.

Have any of you grown potatoes this way?