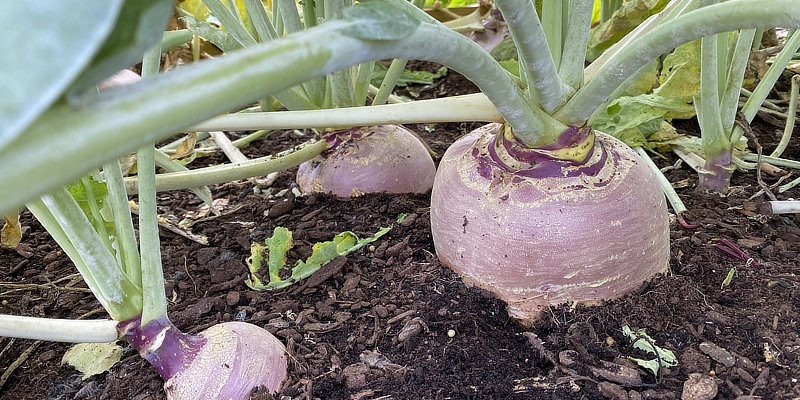 Like most of you, I grow a garden each year. More accurately stated, a number of gardens, ranging from various size raised garden beds to conventional gardening on the ground. Among the implementation, I always add a garden experiment, or two, or three… One of them this year was growing some rutabagas.

(Lets hear stories of your own garden experiments this year – in the comments below!)

I chose the ‘American Purple Top’ Rutabaga variety. Seemed quite popular and well reviewed. Got them from Baker Creek Heirloom Seeds (no affiliation).

So I decided to use half of one raised bed (4’x4′) to try growing some rutabaga. I’ve never tried before. I wanted to discover the potential yield. Also, as a related experiment, to store some of those rutabagas (long term) in my relatively cool shop building. Will they last all winter if I store them properly? We’ll see… I have had good success that way with my potatoes.

Rutabaga is essentially a turnip. Some people don’t like their flavor. It is unique. Some say it’s a bit bitter. However Mrs. J and I thought it was okay, especially when you add them to a beef roast crockpot simmering all day in a bath of beef bone broth (and onion). Yum… Or slice into smaller chunks – wrap in aluminum foil with some added butter – and roast on the grill while you’re cooking the main course.

(Let us know your rutabaga recipes in the comments below)

50 Pounds of Rutabaga From 4×4 Garden

They grew quite well. Not a problem at all. Did you know that rutabaga leaves get quite large? Kinda like elephant ears!

Here’s a photo of the rutabaga leaves (lower right), taken mid-August. You can see a few beet leaves coming up in front of them (they did well too).

I planted the seeds on June 14. Harvested October 1. I’m guessing that’s about 115 days or thereabouts. We have had several frosts during the last two weeks of September, but the rutabaga just laughed at it. Apparently they embrace the cold – at the end. I knew that a hard freeze was coming (this morning at 24 degrees), so decided to harvest them a few days ago.

Look at the size of this one. It weighed in just over 7 pounds:

Here’s a picture of my 50 pound rutabaga yield:

So given the ‘preparedness’ context of this site, the potato is better grown in that regard (calories). However, in comparison, the rutabaga has triple the protein as a potato (1.7 versus 0.6 grams/oz)!

If you’re watching your carbohydrate (carb) intake, the rutabaga beats the potato by a wide margin (2.5 versus 6 grams/oz).

Lastly, the rutabaga was ridiculously easy to grow (at least in my climate zone here in northern NH). Now I’m ready to store some of them away in a cardboard box (in a dark and cool environment) to see how long they last.

What were your garden experiments this year?