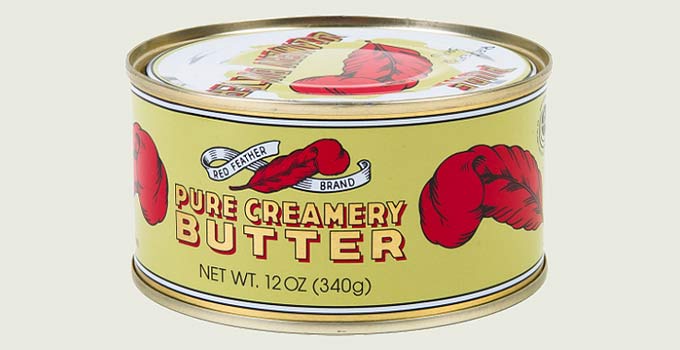 Red Feather canned butter from New Zealand. Yes, it’s expensive compared to ordinary store-bought butter. However, it is a shelf stable canned butter requiring no refrigeration. It has a decent shelf life, making it an option for one’s long term storage /preparedness.

What Is Canned Butter?

Canned butter is probably something that you don’t have on your deep pantry shelves. When considering long term food storage, you might not have known that you can actually get canned butter – Red Feather being widely popular.

If you have been looking to add REAL canned butter rather than powdered or freeze dried butter to your long term food storage, look no further… Red Feather canned butter tastes great!

“We have found a canned butter that is imported from New Zealand that actually tastes better than any gourmet butter we had ever tried and with an indefinite shelf life, no refrigeration is necessary!” said a commenter.

“I bought this butter for long term storage but anticipated opening one can to test it. OMG! This butter is fabulous. It’s much denser than American butter, it’s not watery and doesn’t separate when melted. There is no watery milky residue on the bottom of the dish, just pure butter. It’s very thick/solid and tastes just fine.”

Yes, it is expensive. If you’re looking for the best price for Red Feather canned butter, the following 24-count appears to be the one.

This can contains 12 oz of butter – which works out to three traditional sticks of butter.

Tip: My experience has been that typical “best by” or “sell by” dates on canned foods are not when they “go bad”. Here’s an article I wrote about what these terms really mean:

Also, sometimes when you order canned foods online (like I have on occasion), some of them may come in dented. However, is is highly probable that they’re fine. Here’s another article that I wrote about that topic…

[ Read: Are Dented Cans Safe? Here’s How To Tell ]

No preservatives with names you can’t pronounce! No food coloring’s or chemicals of any kind, just naturally made wholesome butter.

Why Would You Buy Canned Butter?

Yes, it’s expensive. You’re paying for a shelf-stable real butter product that does not require refrigeration until you open a can.

Not only is it good for general prepping & preparedness, it has other conveniences too…

Would also recommend for camping or hunting camp. Places where you may not have electricity.It’s better than dried powder – hands down…

“Just opened a can of butter that is five years old. Has been stored in the basement where it is cool. Just as good as the day I bought it.” said a commenter.

“Finally tried a can of this butter and wow, tastes better than store bought stuff and melts great and even spreads well.” said another on the blog.

Although they say to “refrigerate unused portion”- I would highly recommend to simply buy a “BUTTERBELL BUTTER KEEPER”. This is what is commonly used in Europe and elsewhere for fresh butter storage. Butter kept in a Butter Bell with a tiny bit of water added in the bowl – will last shelf stable up to 30 days. As long as you change the water ever few days.

[Ken adds:] We have been using the following Butter Bell Crock for years. They’re great!

Yes, it is possible to make your own home canned butter from regular store-bought butter. Perhaps some of you have done that. Let us know in the comments below…