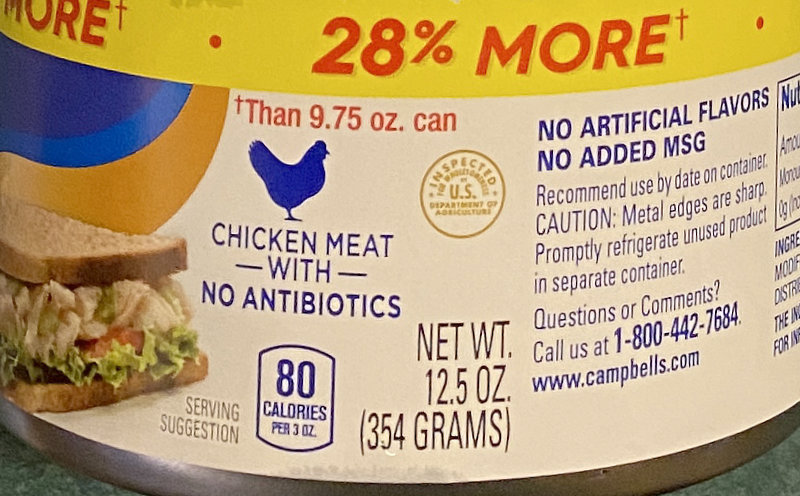 I just had to post this. Most all of you realize one of the ways they screw you at the grocery store. Actually, the food manufacturers. Like in this case, the company who package these 12.5 ounce cans of chicken meat. I won’t name this one, because they ALL do it.

They do it with all sorts of canned foods.

For example there is way more liquid “filler” in this can of chicken than you may realize.

One might think that the pictured can of chicken has about 12 ounces of chicken in it, right? After all, the label says so. WRONG!

After you open the can, use the lid to squish out the liquid into the sink… Look way down inside and there’s the meat. Down near the bottom. You’re lucky if it fills a third of the can afterwards!

So, I decided to weigh the actual chicken meat that was left in this 12.5 ounce can after squeezing out the liquid. I pulled out my very accurate digital kitchen scale. Here’s what I found:

Yes, that’s right, your eyes are seeing it correctly… Just a little over 6 ounces of chicken. You’re talking HALF of what the can says.

So as a result, do you know how much that chicken really costs?

First of all, canned chicken costs more than buying it fresh (usually). Why do I buy canned chicken then? It’s just part of my diversified food storage. I know it costs more. But it has its place, and convenience. I also keep “home canned” chicken and fresh chicken which I vacuum seal for the freezers.

With that out of the way, lets say the 12.5 ounce can costs $3.29. Well if you’re only getting 6 ounces of meat, you’re effectively paying almost $9 per pound! Whereas if you thought you were getting 12 ounces it would’ve been about $4.5 a pound.

Anyway, it’s certainly aggravating to watch all of the ways that they “get you”. Playing with the size of packaging. And the “fillers”. Just thought I would share that…