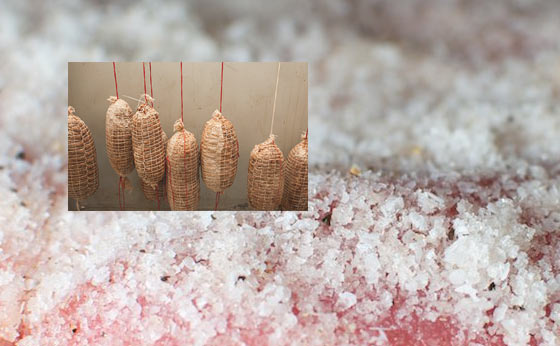 Salting meat for preservation. It is the way it was done. Salt for preserving (curing) meat. It has been a big part of food preservation seemingly forever. The technique is still used today. Dry salting, or using a salt brine, would be a method to preserve meat during a time without electricity (the ‘old days, or SHTF).

Salt inhibits the growth of microorganisms (including those on meat). It does this by drawing out water from the microbial cell (by osmosis) due to the high concentration of salt outside the cell. The cell loses water until it reaches a state where it cannot grow and then cannot survive any longer.

Concentrations of Salt up to 20%

This will kill most species of unwanted bacteria.

By the way, salt stores forever. Generally speaking, I really like Redmond salt from Utah. I’ve found it in 10 pound pails too… Great for general preparedness.

There’s also ‘special’ salt for curing meat. Although any salt will apparently work. Kosher (a coarse grind) is generally recommended. Here’s an example of curing salt:

Salt beef. Also known as corned beef. The use of the term ‘corned’ comes from the fact that the Middle English word corn could refer to grains of salt as well as cereal grains.

Salting meat can be accomplished by adding salt (dry), or, in brine.

Dry salting, also called corning. It is a process where meat is dry-cured with coarse ‘corns’ or pellets of salt. Corned beef of Irish fame is made from a beef brisket, although any cut of meat can be corned.

Salt brine curing simply involves making a brine containing salt. Age-old tradition was to add salt to the brine until it floated an egg. Today it is preferred to use a hydrometer. Or to carefully mix measured ingredients from a reliable recipe. Once mixed and placed into a suitable container, the food is submerged in the salt brine. Brine curing usually produces an end product that is less salty compared to dry curing. Injection of brine into the meat can also speed the curing process.

Charcuterie: The Craft of Salting, Smoking, and Curing
(amzn)

If you’re wondering about salting meat for preservation, the process is fairly simple and straightforward.

In general, you simply rinse the fresh meat in cool water. Then pour a thin layer of salt (generally kosher salt – which is simply coarser salt) all over the meat and rub it in. Next, hang or set the meat out in a cool environment (under 50 degrees Fahrenheit, but not below freezing) for a couple weeks to dry it out some. Before cooking the meat, rinse off the salt with water.

In theory, if you use enough salt when doing this, you can even preserve meat for decades, though of course the amount you’d have to use would probably make it unpalatable.

At the minimum, if you’re only using salt with no other preservative method, it’s generally considered that about a 20% salt concentration on the surface of the meat is needed to kill off most types of microbes and fungi that can spoil the food.

To avoid food-borne illness, do your due-diligence and use reliable recipes if you are to try this.

For those who have experience with salting meat for preservation, let us know your experiences or do’s and dont’s…

[ Read: Uses For Salt That You May Not Have Known About ]