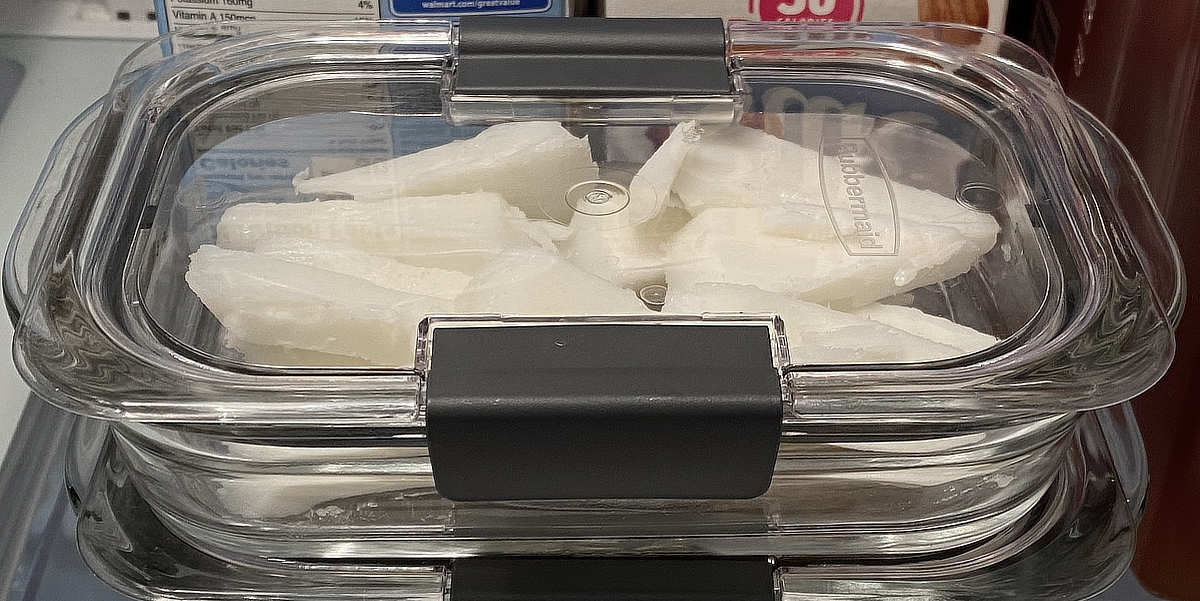 It’s not complicated. Recently, I made another small batch. I took several photos to illustrate how to do it yourself, if you dare. :=)

First, let me say this… Beef tallow is simply rendered fat from beef. By rendering the fat, the result is a stable product that will keep well for some time. I keep mine in the fridge, because it will last even longer that way.

Here’s a little secret… Grocery stores will often put beef rib roasts on sale during some holiday time-frame’s. Last Christmas, and again this past Easter, I snagged a number of these beef rib roasts (they’re actually Prime Rib!) for about half the price of buying prime rib steaks! I sliced about 8 thick rib-eye steaks from each roast. Some were consumed, and others were vacuum-sealed for the freezer. Oh my my… (wink).

Beef fat is a by-product of these roasts. I’ll trim it off the hunks of fat on the perimeter. That can be a good bit of fat. Well, why not render it to beef tallow? Right?

Okay, here’s the process of making beef tallow that works best for me.

Here’s a hunk of fat trimmed from part of one of those rib roasts.

I’m going to use a food processor to chop up the beef fat. But to make it easier on the machine, I’ll first cut it into pieces.

Why am I going to grind the fat? Because I’m going to use a slow-cooker crock-pot, and the process will render quicker this way. You could use any ordinary meat grinder for this. However I’m using a food processor. Here’s what the beef fat looks like after pulsing it into bits for a relatively short period of time.

Okay, here’s the next step in the process to make beef tallow. I’m using my small crock-pot / slow-cooker because it’s a small batch.

After dumping in the ground up fat, add water to just about reach the top of the fat. The amount is not critical. I’ll explain in a minute.

Do you see that white stuff in the middle? That’s Kosher salt (salt with larger crystals). I added about a tablespoon for this amount of fat. Why? I’ll explain in a minute…

Do you also see the bits of red meat speckled in there because it was ingrained with the fat? Don’t worry about that. I’ll explain in a minute.

Switch-on your crock-pot / slow-cooker to LOW. And here’s why this is the best method to make beef tallow, in my opinion. It will not burn, which would put a bad flavor in your tallow. I’ve tried slow cooking in a pan over a low burner, but I find it gets too hot, too easily. Ruined a batch or two… Also, this process (crock-pot) will eliminate lots of the beef aroma and leave behind stable, more pure beef tallow. More on that in a minute.

The water and salt are in there for a reason. It’s pretty clever and effective… You’ll see in a sec…

Here’s a photo of everything after having slow cooked on LOW for about 3 hours:

Strain Into Bowl And Refrigerate

Okay, next step. And I totally forgot to take a picture of this. That is, straining the mixture of what we just slow-cooked. I simply use a fine mesh metal strainer. Some people also use cheese cloth, but I don’t bother because it comes out fine for me with just a fine mesh strainer.

Strain into a mixing bowl with a shape similar to the following photo. I’ll explain why that shape pretty soon ;)

Place this in the refrigerator.

Here’s what happens… The tallow will float on top of the water. As it cools down, the beef tallow will harden on top. The reason I suggested this shape bowl? You can gently press on the tallow’s edge to get the entire chunk to come free in one piece (there’s reason for that). Don’t worry if it cracks though. Here’s a picture. And look at the next one…

As you can see in the following photo, I’ve flipped over the beef tallow, which shows the water in the bowl, and, some little bits and pieces underneath the tallow.

Remember when I said to add some Kosher salt? Well, it helps to ‘push down’ remaining bits and pieces to the bottom into the water. Though some also sticks to the bottom of the ‘pie’. Place the beef tallow ‘pie’ upside-down on a cutting board. Using a sharp knife, gently scrape this stuff off. You’re left with a nice tallow pie. But wait! There’s more…

Render It Again For Even Better Beef Tallow

Here’s the thing… Now render it again. After you’ve scraped off the bottom, I cut it up into little pieces and put them in the crock-pot / slow-cooker again. Add some water, sprinkle some salt, and process on LOW for a few hours.

Strain into the bowl. Put in refrigerator. Later, pop out the beef tallow pie and have a look at the bottom. This time, it looks much more pure. The water has collected some more stuff, and at this point I consider it done. Here’s what it looks like:

Now at this point, some people may choose to heat it back up in a double-boiler (essential whenever you’re warming up temperature-sensitive ingredients that require gentle, indirect heat). Basically, it’s nesting. To do it, simply bring an inch or two of water to a simmer—a boil is not necessary here because you’re going for gentle heat—and then place the bowl with your ingredients inside over top. Why? if you want to pour the beef tallow into a canning jar. Use a Pyrex and slowly pour, while observing if there is any remaining water at the bottom. Stop before you pour any water into the jar.

Like I said, I don’t bother. Instead, I chunk it up and keep it in a sealed container in the refrigerator (pictured at the top of article, for example).

You might be wondering, what do you do with beef tallow? Well, some people use it for all sorts of things other than in the kitchen… making soap, candles, and other interesting things.

Me? Well, here’s one thing… Using beef tallow to help fry up some bear sausage. And/or add a wedge of beef tallow to a bowl of leftover bear sausage sprinkled with salt-and-pepper and some chopped garlic. Microwave leftovers to heat and melt. Stir, and eat!

What do some of you do with beef tallow?