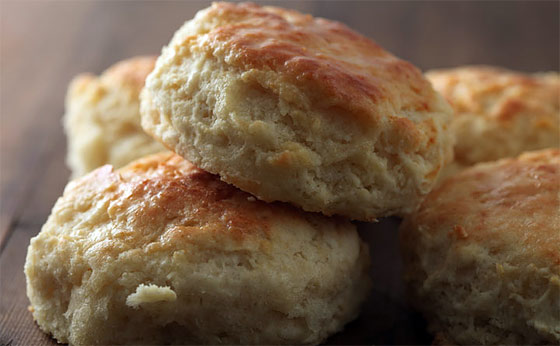 Baking powder is a complete leavening agent. This means it contains both the base (sodium bicarbonate) and acid needed for the product to rise. Cornstarch is also typically found in baking powder. It’s added as a buffer to prevent (slow down) the acid and base from activating during storage. With that said, here’s one reason that you might want to make your own baking powder. Hint: It has to do with preparedness and long term storage…

First, this… When baking powder is combined with water, a chemical reaction occurs. This reaction enables its ingredients to produce carbon dioxide – which is then trapped in tiny air pockets throughout a dough or batter. When baked, the trapped carbon dioxide air pockets expand, thus expanding the overall food. It ‘rises’. So far, so good…

One problem though with store-bought baking powder is its shelf life. And when it comes to preparedness, one thing we look at is how to mitigate shelf life issues. Normally during ordinary times, there’s no issue with the shelf life of baking powder. You just buy another when you need to (when it doesn’t rise so well anymore).

But did you know that you could purchase its bulk ingredients separately (each which will last ‘forever’), and simply make your own baking powder when you need to?

A lot of people don’t know that you can make baking powder yourself.

Here’s how, with just two ingredients. And each of them have an unlimited shelf life…

Note: My observations indicate that store-bought baking powder has an approximate shelf-life of 1 to 2 years. That is, if unopened and stored in a favorable (dry) environment. By sourcing the individual ingredients, and only mixing them when you need to, you are effectively increasing the shelf life to infinity… or thereabouts ;)

Make Your Own Baking Powder Recipe

Optionally also add 1 part Corn Starch for longevity (if you’re making a batch to store on the shelf versus immediate use) because it will absorb moisture over time.

Use a sifter to combine ingredients into a bowl for best results.

If you are making a bulk batch, store in an an air-tight environment such as a canning jar with lid (to prohibit moisture from prematurely ‘reacting’ the ingredients).

What is Cream of Tartar?

Cream of Tartar is a byproduct of the wine industry (bet you wouldn’t have guessed that!). It is formed from the sediment left over in wine barrels after the wine-making process. It is scraped off of the sides of the barrels and then cleaned and ground to form cream of tartar (a fine, white, odorless powder).

The chemical name is “potassium bitartrate”, or “potassium hydrogen tartrate” – an acid salt – (you can see where the “tartar” came from).

What is Baking Soda?

Baking soda is pure “sodium bicarbonate”. Most of what is used in the United States is mined and processed from a raw material (called ‘Trona’) in Green River, Wyoming.

Remember this science experiment? Mixing baking soda (base) with vinegar (acid) and watching an eruption of bubbles? (Simulated volcano eruption…)

Although you don’t want your breads or biscuits to ‘erupt’, the same reaction occurs when you add baking soda (base) with an acid such as cream of tartar (and water to activate).

What is Corn Starch?

Cornstarch is made from washing and drying the “endosperm” of the corn until reaching a fine and powdery texture. It is most often used as a thickener for sauces. It is flavorless after cooking.

This is my understanding of the situation…

Cream of tartar lasts until it comes in contact with moisture. You might say that cream of tarter has an indefinite shelf life if kept in an airtight moisture-proof container, and stored in a dark environment (back of a cupboard). It only goes bad if it is exposed to moisture or if constant exposure to light breaks it down.

What about baking powder (the combination of both ingredients mentioned above)? Since baking powder is the combination of both the acid (cream of tartar) and the base (baking soda), it is susceptible to reaction and loss of efficacy – given any moisture content which finds its way into the mix over time. Therefore it is more likely to lose efficacy.

If the ingredients are kept separate, they will not chemically ‘react’ with each other under such circumstances, and therefore are considered to have an indefinite shelf life – given proper storage conditions.

Baking soda is used in recipes that also include an acidic ingredient, such as cream of tartar, buttermilk, or citrus juice.

Many baked-good recipes include baking soda or baking powder as a leavening agent. Some may even include both.

While both products appear similar, they’re certainly not the same.

Baking soda is sodium bicarbonate, which requires an acid and a liquid to become activated and help baked goods rise.

Conversely, baking powder includes sodium bicarbonate (baking soda), as well as an acid. It only needs a liquid to become activated.

What about Single versus Double-Acting Baking Powder?

The recipe above, how to make your own baking powder, is considered single acting. Single-acting baking powder reacts with a water-based ingredient to form bubbles as soon as the ingredients are mixed. If you wait too long to bake your food or over-mix your ingredients, the bubbles will escape and your food will fall flat.

HOWEVER! My understanding is the additional ingredient in double-acting baking powder is sodium aluminum sulfate. It is an insoluble crystalline powder. Although it is acidic by nature, it refuses to interact with sodium bicarbonate unless fully melted, delaying any reaction until it is warmed above 140 oF. Thus, double-acting.

Aluminum is apparently directly correlated with Alzheimer’s. By making your own baking powder, you are controlling the ingredients and assuring there’s no aluminum (if that’s a concern for you).

Out of curiosity, I have looked for true aluminum free double acting baking powder. Although there are claims as such, upon inspecting ingredients, they’re either not listed, or, the fine print lists “sodium aluminum sulfate”. How they can get away with it is beyond me.

By the way, doesn’t that picture of those biscuits up top make you hungry?!