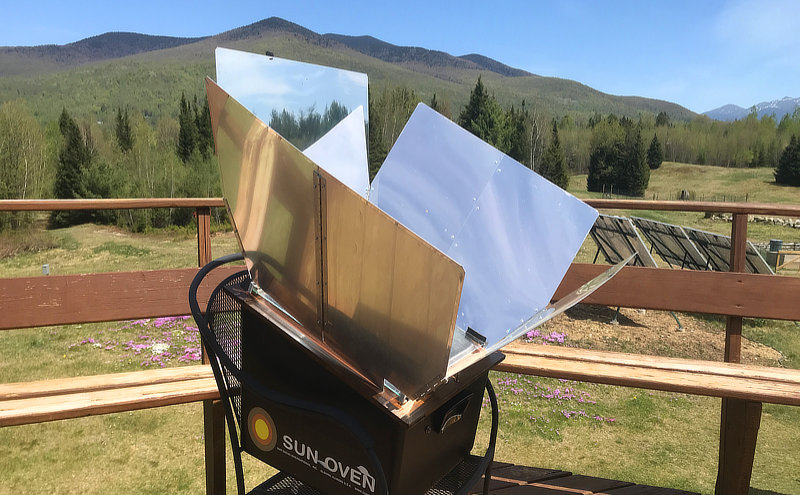 We took out our solar oven (sun oven) for the first time this year. The day was spring-time warm and the sun was shining bright.

We enjoy taking advantage of free solar oven cooking when the weather permits. This way we save a little propane and the house doesn’t heat up from the oven. Plus, it’s fun – kind of like doing a science experiment…

Mrs.J has been making homemade bread at least once a week. And this day seemed perfect to bake it outside.

So I took it out of storage and set my sun-oven outside on a chair. I unfolded the reflective solar panels and aligned it to the sun:

It quickly heated up to about 325-degrees. Nice. Then Mrs.J brought out the bread in a baking pan ready-to-go. We opened up the glass door, set the bread in, closed the cover and stared at it for a minute or two. Realizing that what we were doing was similar to water taking longer to boil when you keep looking at it, we walked away.

But you know what happened about 10 minutes later? Murphy.

Living in the mountains, there are days when clouds can rapidly develop depending on weather conditions. Well on this day, that’s exactly what happened. It wasn’t total cloud cover, but sporadic 50% cover. We decided to just see what happened with the bread, while the solar oven temp kept falling.

I should’ve taken a picture of it. But what happened next was nothing short of a massive “cave in” as the rising bread just couldn’t hold itself up.

At that point we decided to bring it up to the “real” oven to salvage what we could. Of course it wouldn’t fix the cave-in, but at least it cooked some more.

Since it was more or less a sort of “brick”, we ended up breaking it up and drying it out the next day on a tray in the sun. We turned it into bread crumbs and put it all in a canning jar to use next time we make meatballs (grin).

Check the weather forecast. Though they’re not always right, if they’re calling for partly cloudy skies (and it’s currently full sun), you might want to forego baking bread that day.

Baking Bread The Next Day In Solar Oven!

The very next day, it was nice and sunny and warm. So we tried it again. This time, success!

I bought my “Sun Oven” (view on amzn) many years ago. Wow, now that I think about it, probably a decade ago. This particular one was (is) expensive. But like many other decisions I’ve made in the past (for some things), you get what you pay for. And I knew that I would use this for many years to come (and I have).

I’ve also made a few homemade solar ovens (though I don’t have them anymore). One of these days I might try it again, just for fun.