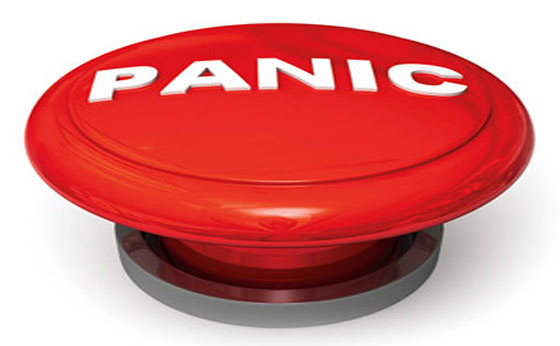 I’ve read statistics that 80 to 90 percent of people will panic during an emergency. Or will be unable to stay calm during an emergency or survival situation. This leaves just 10 to 20 percent who are less likely to panic. Those who will be able to grasp the situation more clearly.

Have you ever noticed others who panic during an emergency? Or, those who will panic in a situation much less than an emergency?

Extreme panic may cause someone to become paralyzed with fear or indecision. Unable to do anything, or to take the right kind of action. If a decision is made, it’s often a bad one.

Here’s a related general observation that I’ve noticed… When there is a group of people who all are within a given emergency situation (or potential emergency)… If there’s someone in the group in a vocal panic, the situation is often worsened. This is due to some of the others who will start ‘going off the edge’ while the person in panic is spouting out all the wrong things… If you happen to be in this situation (and you are not in a panic), you may need to take control. Most people are followers, and you might not want them following someone who’s “off the rails” in a panic.

People Who Don’t Panic During An Emergency

There are a lot of factors that will apparently affect whether or not someone will panic. Ultimately, one never knows until a real condition arises.

To practice, to drill, train, learn solutions to potentially disastrous scenarios. The ability to adapt, to think on your feet. To think scenarios through ahead of time, etc.. all of the above should help.

A major problem often arises when someone has not ever even considered what they would do if ‘this’ happens or ‘that’ happens. Having said that, it does apparently come more natural for some than others (the ability to correctly assess and act).

People who don’t panic during an emergency will be able to think more rationally. Clearer. Observe the emergency situation in a more calm way that enables a potentially correct plan or set of actions.

Those who do not panic are not necessarily free of fear. They may actually be puckered up and ‘scared $hitless’ (panic and fear I believe are two different things). The difference? While perhaps filled with fear, those who don’t panic may better able to maintain their sensibility.

Observations Regarding Panic During Emergency

A few comments on this topic from Modern Survival Blog readers:

I have noticed that in emergency situations such as automobile accidents, people choking on food, snake bite, etc.. I tend to see/experience the situation in slow motion. And I get an extremely calm feeling where my thinking is clear and logical. I don’t have conscious control of this it just happens so I guess you either naturally have it or not.

The experience of time alteration is very common during times of extreme stress, such as a car accident, combat, and other, sudden, life threatening, situations. This is an inherited trait, which many do not have.

A person possessing this survival trait has the ability to speed up their ability to perceive sensory experience and process thought. When such a mind automatically goes into “high gear” the increased ability to fathom the surrounding action allows a better chance of survival.

When the event causing the mind to speed up is remembered, the mind is no longer running at the speed with which it gathered and processed the experience. Thus, the event is recalled in extreme detail, as if everything had slowed down during the event. As if a camera records the action at high speed, but the film it produced is viewed at a normal speed…making the action seem to be happening in slow motion.

Pumping gas at a station in a grocery store parking lot – a wood-chip filled parking island 15 feet from the pumps was smoldering pretty heavy.

I watched various people try pouring water from little bottles on it, stomping on it, etc. – people were yelling and generally milling about as the fire got larger.

I finished pumping, grabbed an extinguisher from the gas pump, walked over and doused the flames. Put the extinguisher back and got in my truck as people were just staring open-mouthed as if I had just performed magic. They won’t last long in a SHTF scenario.

Panicked And Running Off At The Mouth

It may be argued that letting the panic-filled person who is running off at the mouth, continue his/her rant and they may then lead the group over the cliff. Thus causing an important diversion in which you may take care of business. Herds can be useful. How many old westerns have you seen when they run a panicked herd thru the town as cover. Just sayin’, use all tools available.

During extreme danger, the brain filters out information that is not important for coping with the danger, letting in only information necessary for making survival decisions.

This filtration process is person dependent. With some people there is little or no filtration, and as a result there is sensor over load ( the person freezes up- no decision – no action or erratic behavior.

Erratic behavior happens when there is a rush of adrenalin. Time seems to stand still because the brain is busy filtering every thing out that is not really important at that instant. Training (such as combat training) helps manage this.

The Value Of Training And Experience

I’ve heard it said this way, “From experience comes knowledge. And from knowledge comes confidence.”

As a military veteran, former LEO and commercial pilot, I can’t overemphasize the value of training and experience.

As you can imagine with this kind of career path, I’ve experienced a number of precarious situations. But with proper training and confidence in my abilities, equipment and others in the field, I was always able to control my fear and never found myself in a panic.

By the way, it is also said that you should “learn from the mistakes of others. You won’t live long enough to make them all yourself.” From their experience comes knowledge, too. I’m happy to say that I’m enjoying my retirement years.

Why is it that some people panic, and make very poor decisions, while others are able to cope with the situation in a much clearer manner – and make better decisions?

Is it from lack of experiences in a given emergency situation? Is it from a lack of knowledge or training for a situation? Or is it just part of the DNA?