The Varieties Of The French Marigold 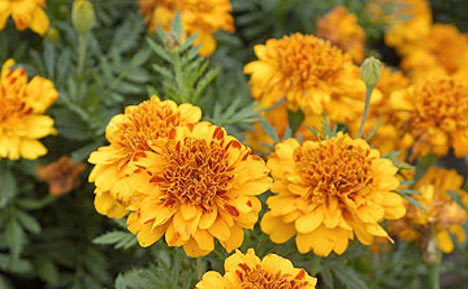 French Marigold flowers are a popular and beneficial garden companion that will help your garden plants thrive because of their potent pesticide-producing root system, and strong aroma to ward off pests.

Have you ever wondered which varieties of the Marigold are actually ‘French’ Marigolds?

Several years ago when I had first read about the benefits of growing the French Marigold in your garden, I discovered that there are lots of Marigold varieties with many different names.

I went to various nurseries in search for the infamous flower, but discovered that there were many varieties to pick from, and none of them were named ‘French Marigold’. I later discovered that some of these flowers are considered ‘French’ while others are not.

There are two basic types of Marigold flowers, American and French.

The French Marigold varieties are bushier, they generally are shorter than the American Marigold, and have smaller tighter flowers (unlike the American varieties which tend to have large full flowered heads).

The French Marigold flower exudes a potent substance (thiophene) in their roots and leaves. The theory is that the in the immediate vicinity, the substance might catch and kill some of the pests called ‘root-knot nematodes’, a common pest of many vegetables, flowers, and shrubs. Aphids /White flies also hate the smell of the Marigold.

The French Marigold is particularly beneficial to tomatoes, squash, eggplant, broccoli, potatoes, and peppers, but don’t plant them with beans. At the end of the season, leave their root system in the ground because their ‘anti-nematode’ effect is said to last for a time afterward.

Here is a list of varieties which fall under the classification of the French Marigold.