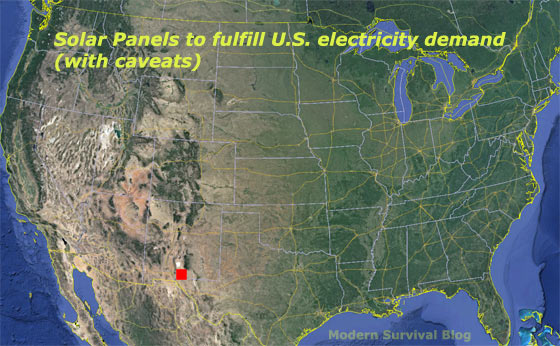 square area = 44 miles per side

This amazing map illustrates the total area of solar panels that would be needed to fulfill the electricity demands of the United States.

Here are the facts that I used, and the caveats to the map illustration…

The United States Energy Information Association (eia.gov) reveals in their December-2013 ‘Electrical Power Annual’ report, in Table 8.6.A, that the peak load for all interconnections of electricity during the summer of 2012 was 767,762 Megawatts within the contiguous United States.

It is also reported that total electricity consumption for the United States during 2012 was 3,694,650 million kWh (million kilowatt-hours).

I chose the location near White Sands Desert in New Mexico because the geographic area there receives an abundant amount of sunshine. 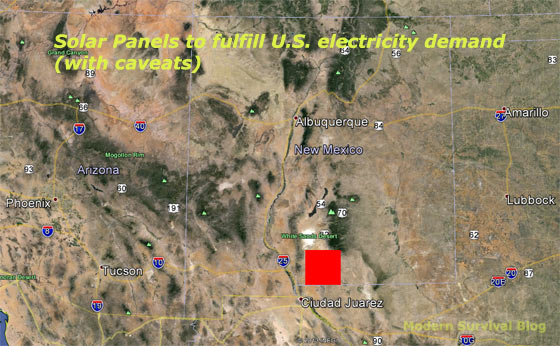 It is very interesting to visualize equivalents, such as the total theoretical area required to supply the total demands of electricity for the United States.

That is a-lot of solar panels! 3 billion of them. However it is an interesting thought to consider the total approximate cost of these panels compared with what the United States government spends every year on everything else… If one approximates each panel to cost $250, the total cost would be $767 billion. To put it in perspective, the government spent 3,600 billion in 2012.

The raw materials and manufacturing capability would be enormous to build that many panels.

The infrastructure and additional equipment needed would be tremendous.

It’s dark at night – no solar power generation… so traditional power would required during those times. A battery storage bank would be unimaginably huge for night storage at these power levels…

Solar panels and inverters are not 100% efficient.

There will be cloudy days.

Less sun during the winter months unless this was built on the equator.

While it may not be doable to build a central location for our nation’s electricity needs, it is very doable to augment one’s own electricity needs with solar photovoltaic panels. Even building an off-grid system is entirely within the realm of possibilities for many people.

In any event, it was an interesting exercise to determine how much total area of solar panels would fulfill the nation’s electricity demands. It’s a smaller footprint than I initially thought it would be…