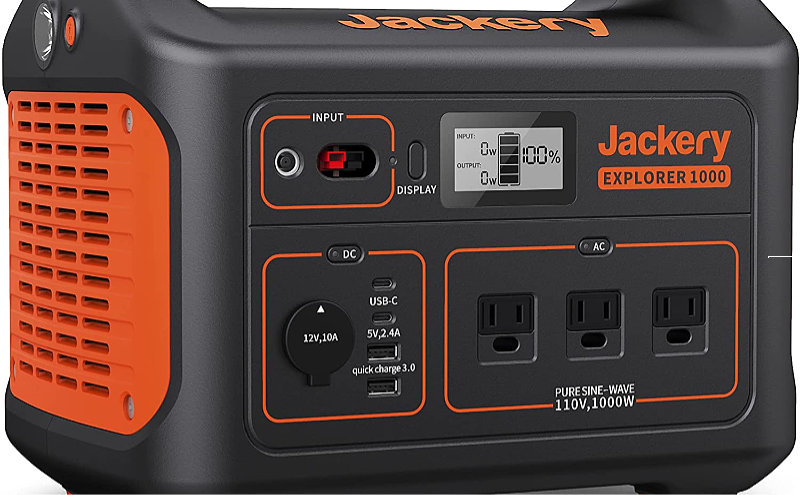 You might find this interesting. A particular difference between an ordinary generator and something like a Jackery Portable Power Station. Or any similar energy storage device/brand that uses a battery for energy storage. Sometimes they’re called a Solar Generator. It has a battery inside which stores energy. Typically a Lithium-ion battery pack.

In other words, a solar generator versus a gas generator…

A fuel powered generator (typically gasoline). Where’s the energy stored? It’s in the gasoline itself. The gas. That’s the energy.

A device like the popular Jackery Portable Power Station. Where’s the energy? It’s in the battery. How does it get there? Either by plugging it in to a standard AC outlet to charge, or, charge by solar panels.

But here’s what I find particularly interesting when comparing the operation of a typical gasoline generator (or propane), and a battery storage ‘generator’ device like the Jackery…

Difference Between Jackery and Gasoline Generator

Lets say they are both 1,000 watt generators.

As you are well aware, the gasoline powered generator simply runs all the time. It makes available 1,000 watts in this example (or whatever) for consumption. It’s constantly using fuel to make available that power/energy, regardless of loading.

If you’re only using 200 watts, the generator is likely using more fuel than you actually need (because it’s rated for more watts than that, and it’s always running). Okay, a caveat… Some generators will automatically throttle back when there’s lower power demand. My Yamaha’s do that. However, it’s still always running, and there’s still lots of inefficiency when you compare with what I’m going to say next…

A ‘generator’ like the Jackery 1000 (for example), will make available 1,000 watts of energy. But it behaves differently than a typical generator. It just sits there, using no fuel, no energy, waiting for a load. A demand. So, when you plug in something that’s using 200 watts, the generator will provide exactly that. No more, no less. No waste.

When you shut off that load, well, the Jackery generator goes to zero. Waiting… So it’s efficient that way, compared to a gasoline powered generator that keeps on guzzling gas, even with no load.

Okay, I know there are many obvious advantages to a gasoline generator. Much higher power than a ‘Jackery’, for example. As long as you have fuel (gas/propane) it will keep on running. And, a battery-powered generator (like the Jackery) will require recharge after the stored energy is consumed. But that’s not my focus in this article.

What got me to thinking about this?

Well, one of my popular articles on the blog via search-engine-hits is about keeping a chest freezer running during a power outage. Obviously an ordinary generator would be fitting for this.

A device like the Jackery 1000 would likely work well for awhile, to keep a chest freezer running – before needing a recharge.

One of my mid-size chest freezers measured a consumption of 600 watt hours during a 24 hour period. The Jackery 1000 can store 1000 watt hours of energy. You could easily get through a few days of power outage for your chest freezer.

First day (or probably even 48 hours) it should be fine if you don’t open it. Especially if it’s pretty full. Then, plug it in to the Jackery on Day 2 or 3. Or, plug it in beginning on Day 1, for a few hours, twice a day. Do this each day. It might be enough for this model Jackery to keep it going for quite a few days…

The compressor cycles on and off throughout a day. When it’s cycled OFF, the Jackery goes to zero. Whereas a gas generator will keep running. That’s the unique difference with this type of lithium battery storage generator, like the Jackery.

It’s a simple concept, but notable. A gas generator will consume fuel even with no load on it. A battery storage generator will go to zero (or almost zero if it’s turned ‘on’) when there’s no load.

Advantages of the Jackery (or other similar generator device)

It’s safe to operate indoors. Therefore very convenient to plug in devices. Obviously a gasoline or propane generator must be outside for safety/fumes, and a power cord brought inside the home.

Many can be recharged with solar panels. For example, pairing with two 100 watt panels, the Jackery 1000 could theoretically recharge in about ~ 6+ hours of full sun (you never get full rated power on solar panels in the real world).

You might say that it provides “endless” power, provided that you have the solar panel option.

They’re much smaller and lighter weight than a typical generator. Easily handled. These devices are becoming increasingly popular for use while camping or RV camping.

The technology is constantly improving. It is an intriguing method of energy storage and delivery, for preparedness.

Yep, it’s expensive compared to most gas generators. Though my Yamaha’s were expensive! (I was willing to pay extra for their Very Quiet operation and high quality line inverter). Similar to the Honda.

But I’m keeping an eye on this battery technology and the adaptation to generators.