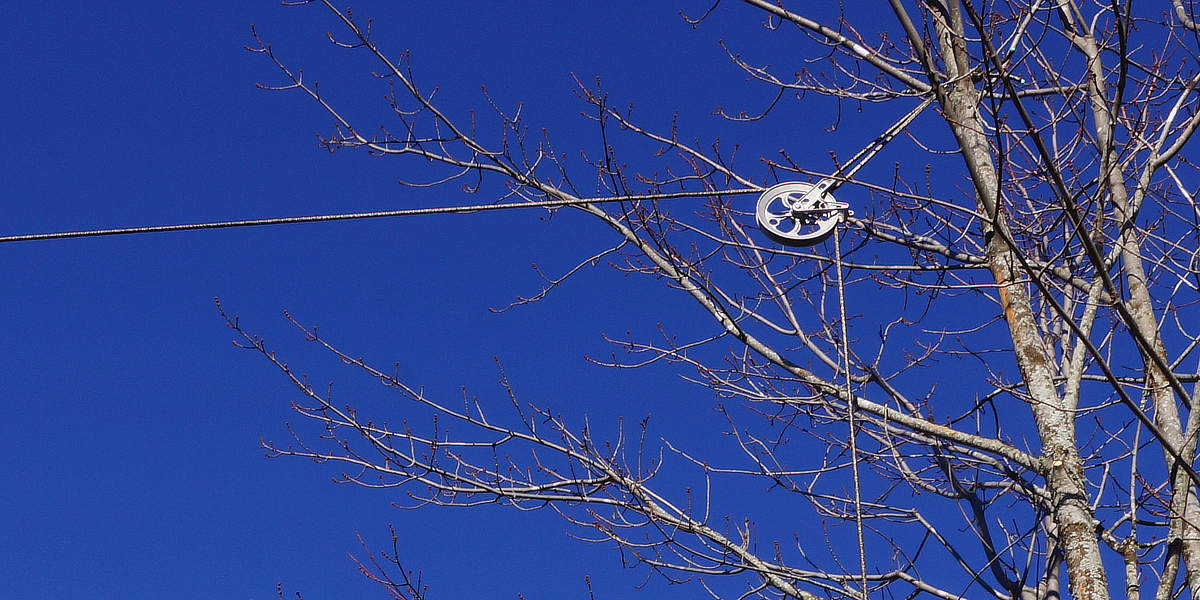 Here’s a tip for any radio operators out there. Installing a long wire antenna when the only best way is to attach one end to a tree? (Example: House to Tree) Well, here’s what I did to help mitigate the problem of swaying trees in the wind – which would otherwise likely snap your antenna wire.

Use a pulley attached to the tree, with a counterweight.

I recently did this with a 130-foot end-fed HF long wire antenna.

The end of the long wire antenna near the house is attached (fixed). I just so happened to have a Maple tree about 140 feet away, making for the most convenient point to attach the other end of the antenna.

I knew that the wind and resulting tree sway would be a problem. To solve that problem is really pretty simple. Rope, Pulley, Counterweight. I bought a clothesline pulley (the good one, not the cheap plastic), and I already had plenty of various size rope. I ended up using one of Mrs. J’s weights (8 pound) as the counterpoise to counterbalance everything.

The antenna happens to be a EFHW-8010-1K (no affiliation). They recommend, “Always make sure that any installation involving moving trees has enough sag and not too much counterweight if a pulley system is used otherwise the flex in a swaying tree limb may snap your wire!”

The antenna wire is 16AWG, and has a tensile strength of ~85 pounds according to the manufacturer.

I put up an extension ladder into the Maple tree. At first, I used paracord for the tree attachment and antenna wire attachment (via an insulator separating the antenna from the paracord). However, this presented a problem… The diameter of the paracord. Although plenty strong enough, I felt that it could potentially slip off the clothesline pulley and get jammed up. So instead, I chose a larger diameter rope. It’s big enough not to pop off the pulley and get jammed (in theory).

I chose the following pulley. Heavy duty, rust-proof, ball-bearings, and (believe it or not, made in America).

Assuming this setup survives the upcoming winter, I’m going to do a better job of protecting the tree – come spring. Because the tree will eventually grow around the rope. I know there are solutions to this in the landscape /arborist genre.

I took the easy way out. Stole one of Mrs. J’s barbell weights. Actually, it’s temporary. I wasn’t sure how much counterweight to attach to the rope via the pulley and antenna. I experimented.

Like I said, this long wire antenna is 130 feet long. After having attached the metal clothesline pulley to the tree, I fed rope through the pulley, and then tied it to the antenna end insulator.

Several of Mrs. J’s barbell weights were at my feet at the base of the tree. I pulled on the rope and hoisted up the antenna, leaving a good bit of sag in the middle. Then, started with a 3 pound weight. Not enough. Next, a 5 pound weight. Not bad, but sagging a good bit. Lastly, the 8 pound weight. This seemed pretty good, leaving only some sag over the entire span, but not a whole lot (looks like less than 2 feet). The tensile strength of the antenna wire is supposedly ~85 pounds. So in theory, there’s plenty of margin (10:1). That is, so long as the pulley and rope don’t freeze up solid during the winter up here in northern New Hampshire! Like I said, this is an experiment.

It was windy the other day. I went over to the tree to watch the pulley and counterweight do its job. It was perfect, observing the counterweight moving gently up and down with some of the wind gusts. If I stay with the 8 pound counterweight, I will probably make my own. Fill 8lbs QUIKRETE concrete into a coffee can and sink an eyebolt into the top (for example). Then I can give the 8 pound barbell back to Mrs. J (grin).

This is all pretty common sense, but I thought I would share a few photos of my project the other day.