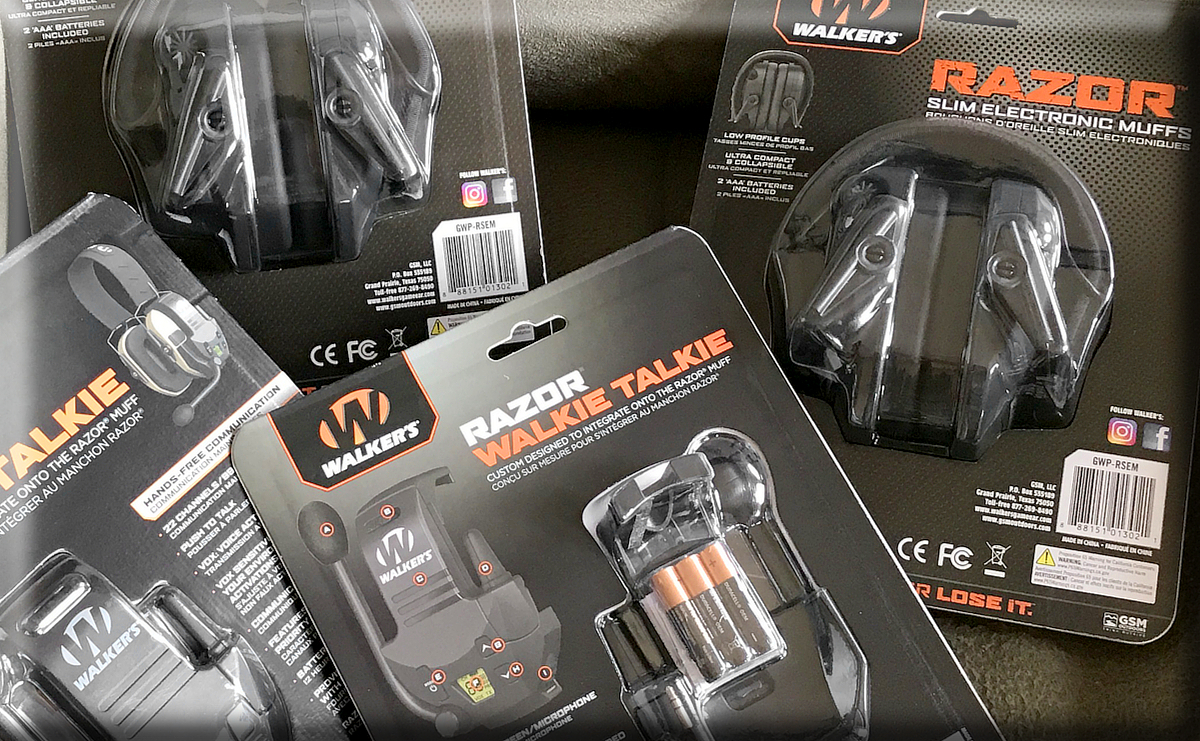 I recently bought two pairs of the Walker Razor Radio electronic ear muffs. Actually it’s two things… Their ‘slim’ muffs AND the radio accessory (which installs onto the muffs).

Though I have a number of electronic muffs already, I bought these to try out the accessory 2-way radio (walkie talkie) attachment. The concept sounded practical, with several use-case scenarios.

Note: The radio accessory can ONLY be used with the Walker’s Slim Razor muffs. (Just so you know).

How Far Will The Walker Razor Radio Walkie Talkie Transmit?

I’m going to review the 2-way radio (walkie-talkie) “Handsfree” communications right away. That’s why I bought these. So hear goes…

They operate on FRS / GMRS frequencies. Same as most typical consumer handheld walkie-talkie 2-way radios. You can look up the specs for more data. But I’m curious how far they’ll go in the real world.

In short, they work well for relatively short distances. They’re intended to be used on a gun range – to keep in communication with a partner – while keeping your muffs on while others nearby may be shooting. For that, they fit the bill just fine.

Their marketing claims “Communications up to 3 miles”. Ummmm, no.

Seemingly ALL 2-way radio manufacturers claim distances which are typically way beyond reality. That’s why it’s good to read reviews from real-world experience. It’s never as far as they say. Why? Because those distances are under “perfect” conditions – which rarely exist in your own world…

So, I did some experimenting to see how far the Walker’s walkie talkie would go in my own environment. Here are my initial results…

Pretty Good Out To 600 feet

The further distance between two headsets (once you go beyond about 300 feet), the reception gradually began to get noisier. More static. The density of obstructions between you will affect this. I did two tests at this distance.

One test was clear line of sight from Mrs.J sitting in front of the house while I walked across an open field to about 600 feet away. The audio / transmit / reception was still pretty good. Slight detection of noise.

For the other test I walked down our drive. It put a dense stand of trees between us. As I continued over a slight rise and then down the other side, it also put a hunk of “earth” between us. At about 600 feet (almost 1/8 mile) the reception was noticeably noisy and becoming somewhat irritating to communicate.

So my general conclusion is that distances between 300 and 600 feet become increasingly annoying due to increasingly poor reception and noise. Again, that was not direct line of sight – but what may be considered somewhat “normal” in the real world.

Completely Fell Over At 1/4 Mile Distance

I continued walking down our drive. The communication distance between our two headsets simply got progressively worse. At about 800 feet it was definitely annoying. 1000 feet, pretty poor. And as I got about 1/4 mile away (~ 1300 feet) communication was impossible.

I had brought my BaoFeng handheld with me. As expected when I transmitted through that radio after losing comms with the Walker’s at 1/4 mile, Mrs.J said it blasted through loud and clear.

First, I did not expect that these headsets would go (transmit / receive) too far. They’re not designed for that. They’re obviously low power transmitters (due to FCC restrictions on their bands). The antenna is a very short stubby (to accommodate being strapped to your head/ears). And they’re intended for comms on the range.

With that said, I am very pleased with the results. Why? Because I wouldn’t be using them for longer range comms (I have other radios for that). Rather, they have a few nice use-case scenarios.

I’m sure you could think of more uses for fairly close range communications. But overall, I felt that it was worth it.

The Razor electronic muffs by themselves are very good. I was quite surprised how much ambient sound I could hear while turning up the volume!! Better than some of my other muffs in that regard. Being slim design is great for shooting any rifle (easier to cheek and see through your optics).

The VOX (voice activated option for the microphone) didn’t work very well. Despite two sensitivity settings, it was troublesome. Didn’t always work. I don’t feel that’s a detriment because I wouldn’t normally use that anyway. I would much prefer to press the transmit button – which is simple and easy to do on this headset.