How To Stop A Bloody Nose Or Bleeding From The Mouth 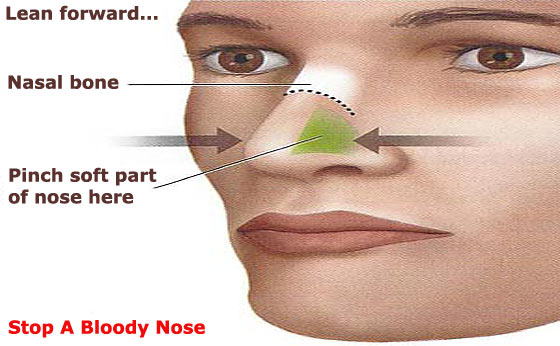 People are sometimes misinformed about the best way to stop a nosebleed. The correct way to help someone with a nosebleed is to follow these steps…

How To Stop A Nose Bleed

1. Press both sides of the nostrils while the person sits and leans forward.

2. Place constant pressure on both sides of the nostrils for a few minutes until the bleeding stops.

4. Dial 911 if:
-you can’t stop the bleeding in about 15 minutes.
-the bleeding is heavy, such as gushing blood.
-the person has trouble breathing.

How To Stop Bleeding From The Mouth

2. Dial 911 if…
-you can’t stop the bleeding.
-the person has trouble breathing.

have heard someone claim, it also helped (not instead of) to place a bag of ice on the back of the junction between neck head, as one is leaning forward. (don’t know fr personal use if so, but seems like it wouldn’t hurt)

When my cousins got a bloody nose, the ole folks put a silver piece at that same spot, Silver dollar! I thought them crazy. Anybody ever hear of such a thing? The nose stopped bleeding of course.

Probably because silver has antibacterial properties while at the same time using it to apply pressure. That’s my guess…

Drinking a pinch of Cayenne Pepper in water will stop the bleeding almost immediately too.

Thanks for the tip! Also, apparently applying cayenne pepper on the wound area, along with pressure, helps to stop bleeding.

I know this won\t apply to a nosebleed (likely to cause sneezing), but I have read a few times that plain black pepper applied to a wound/cut is both useful to kill germs and apparently stop bleeding. luckily have not cut myself recently to try.

For a bloody nose, have over the counter NEOSYNPHRINE 0.25% NASAL SPRAY Phenylephrine is a vasoconstrictor, spray the stuff in your nose and the bleeding will stop in short order. You can pick up stronger phenylephrine, but 0.25% is plenty. If you get something stronger, just water it down. Spray until the bleeding stops, then wash out your nose and spray again, then wait the coagulation to occur. It is the rare nose bleed that cannot be stopped by neosynphrine. For very difficult ones, there is protein material, such as surgicel, there is one specifically for nose bleed. Take it and make a pile of protein pieces, then mix with some neosynephrine and vaseline, and stuff in nose. until packed. Using those balloons are trouble, because severe nasal infections are associated with those balloons and once a balloon is inflated, you are committed for 72 hours due to the pressure. The balloons are more trouble than they are worth. The protein material, stuffing is for the most difficult, and chance of infection is slim at best.

The icepack on the back of the neck does work. Helps to slow blood flow by constricting the blood vessels in the neck. Also, packing the nasal cavity with a saline/steroid cream mix(triamcinolone) soaked and elongated peice of cotton ball will serve to apply direct pressure to the bleeding area inside, keep it moistened and shrink the bleeding blood vessel inside the nasal cavity. It will be slightly uncomfortable. Make sure to leave enough cotton sticking out to be able to grasp it and remove it an hour or so later. It can als be re- moistened with saline by dripping some on the area of cotton sticking out, the cotton ball acts as a wick and draws the saline up.

My nose has been broken over 9 times and the last time in 4 places. Every time I simply pinched my nose at the base “where the bone starts” and applied an ice pack. The ice “freezes” the small blood vessels and causes them to contract thus stops the bleeding. I wouldn’t suggest shoving spices up you nose as you have sinus membranes that can be clogged and then you have another problem to deal with.

Only over the last two years have I had a problem with nosebleeds. I read about Cayenne, so I bought some Cayenne capsules. Whenever I pinched a SMALL amount into my bleeding nostril, the bleeding stopped within a few seconds. WARNING: Twice I was bleeding so profusely that I carelessly snorted a half or more of the Cayenne into my nostril, and both times it caused me to be unable to breathe. I had to gulp down water in order to restore breathing. Yesterday I experienced five nosebleeds, and for the first time ever, the Cayenne didn’t work. So I researched (while holding my nose pinched shut!) and found another remedy which I tried: a small cotton ball soaked in WHITE VINEGAR carefully inserted into the bleeding nostril. The bleeding stopped immediately and I kept it in overnight and changed it this morning. There has been no more bleeding since, but this morning drove to Walmart before 7:00 AM with the cotton in my nose and bought some foods that are supposed to help prevent nosebleeds: black tea (Organic if you can get it), brown rice (Organic, if you can get it, and 100% whole wheat bread (Organic, if you… Read more »

do you by chance take Vitamin D? or get a fair bit in milk/bread/etc products (it is added to almost everything)?

I cannot take Vitamin D, or eat much of any product with Vitamin D added, or I will bleed profusely at the tiniest cut.

As a boy, I had frequent nosebleeds most commonly in the mountains. I am 55 and even in San Francisco at sea level with 50% humidity I continue to get them. I was tested and confirmed to have a low platelet count. My biggest frustration is when the bleeds occurred. I had no control. Once I get them I would pinch to get it stopped and rest quietly for the next few days with no activity. I go to an ear / nose / throat doctor 6 times a year and have been cauterized regularly The good news, is I have found a home remedy; safe, and easy to manage and it might work for you too. Initially I assumed my trigger point was humidity. So, for years I tried ointments and saline sprays, but I still got the nosebleeds. I tried drinking more water 80 ounces a day (I am a 165 lb person) to be better hydrated, not much help. One day I decided to look at what my doctor sees in my nose. I purchased a small 3” convex compact mirror that has 15 x magnification and a high intensity pen light…It was the beginning to finding… Read more »